So my bonefishing experience in Hawaii was top notch, even though I never successfully landed one. As for the other fish that filled gaps in between tides… unreal. The bonefish disappeared off the reef when the tides became too low. This provided tons of opportunities to throw at triggerfish that were pushed out of their homes and to tall to stay up on the coral flats. These Hawaiian triggerfish (Huma Triggerfish / Humuhumunukunukuapuaa ) were a real challenge to present to but once the fly found the fish it was an eat every time. They were just as spooky as the bonefish but I was using my 6wt so the presentation was much more delicate. These little guys would race to the fly, position themselves completely upright and shove their head down into the coral heads to pick up the fly. A few of these fish even chased a slowly retrieved micro gotcha’ or crazy charlie. 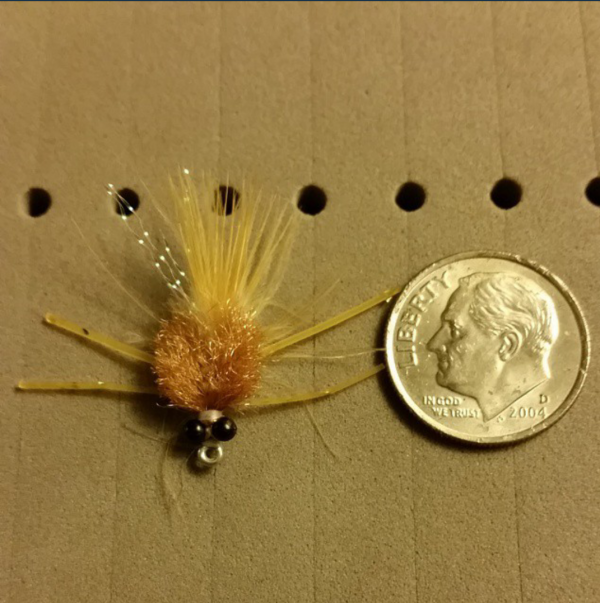 Here are some of the pictures I took while walking the reef. Some spots I could really sneak up on the fish and others I had to switch to my 8 wt. and hail Mary casts at them. 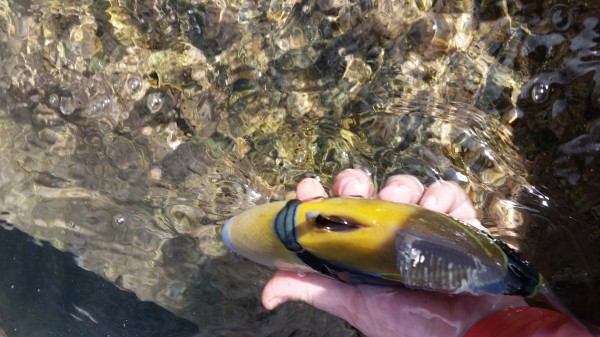 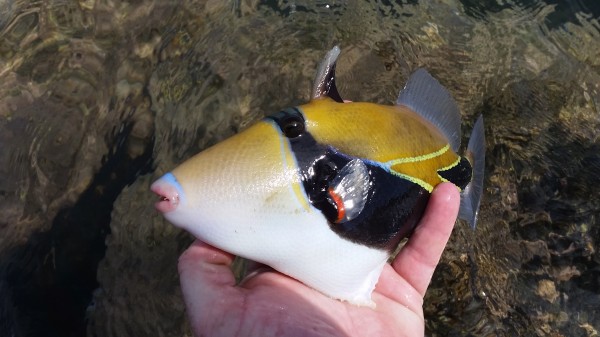 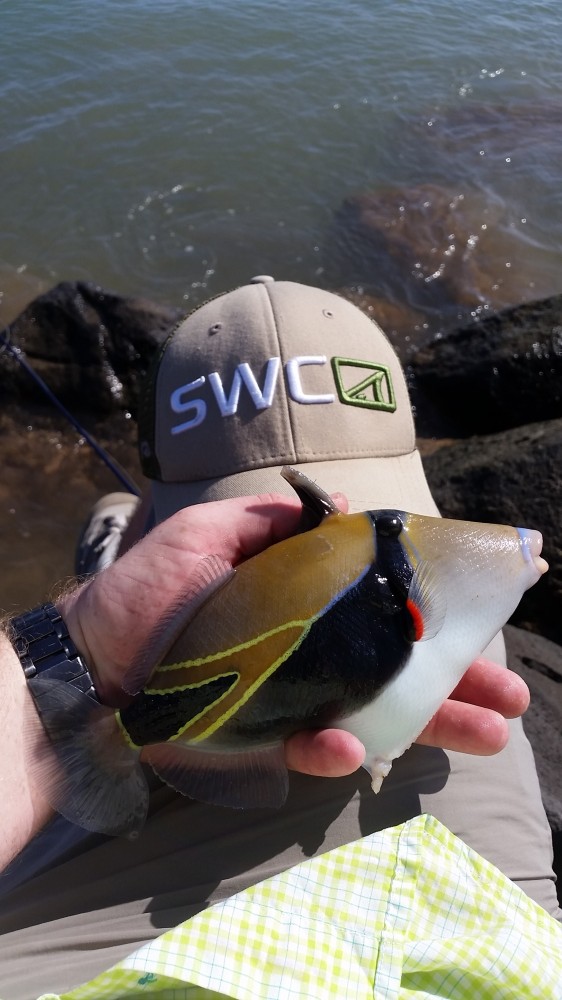 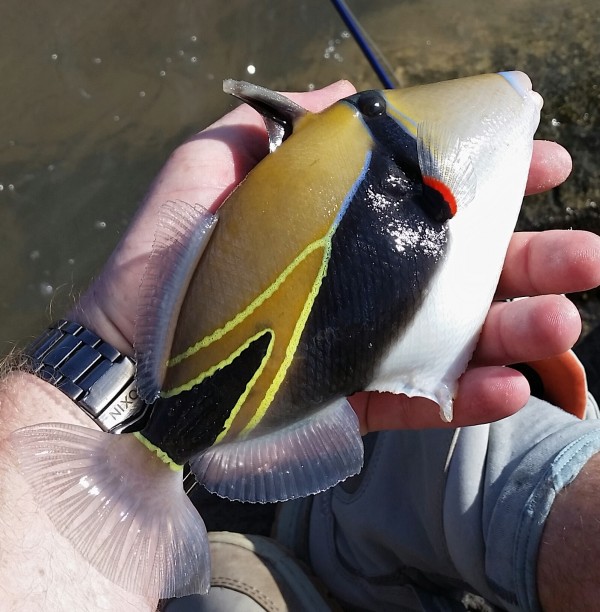 As I was trying to fish for the triggerfish I caught all sorts of reef fish as well. I know some people have these fish in their aquariums at home, which made catching these unique fish even more memorable. 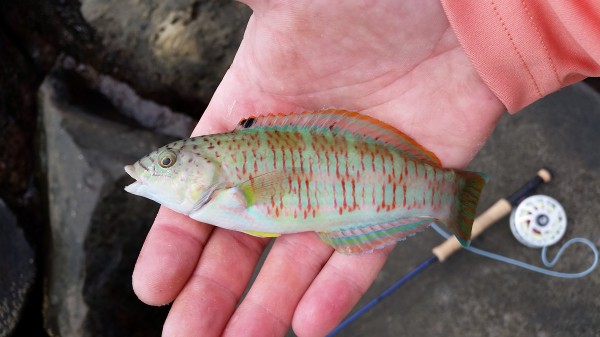 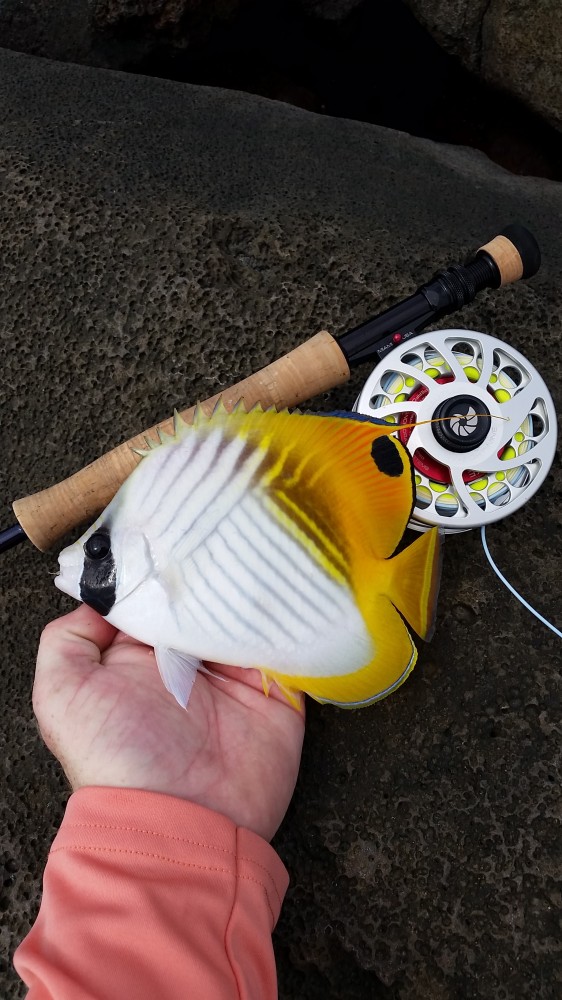 This trumpet fish had an amazing yellow/green color to it and my damn DSLR some how auto corrected the photo to this! Still a really cool fish to have eat a fly. 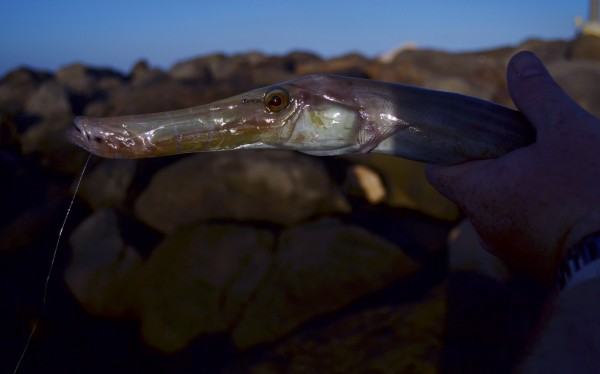 The baby trevally that inhabit the reefs are annoying as hell, any time you had a perfect shot at a trigger or bonefish you could almost guarantee that a papio (Baby GT) would beat them to it or scare them off of it! But they did pull hard and provided a ton of fun on the lighter rod. 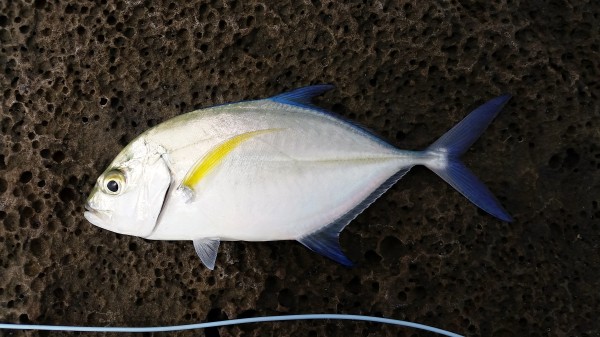 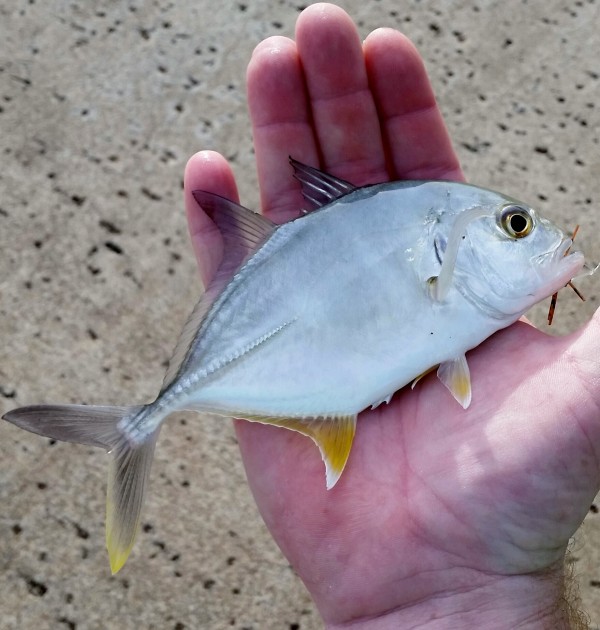 But by far my favorite part of fly fishing in Hawaii was when I decided to go out and throw at night. There was a full moon while we were there and the clouds were non existent that night. I thought to myself, I bet I can still see the bonefish and supposedly they will feed all night on a full moon. Crazier things have happened to me and knowing my luck I was sure that I would catch my first bonefish in the middle of the night. As I stood on the edge of the flat waiting for anything to give itself away, with a shadow or reflection, I started to think “this is crazy, your on your honeymoon, there are other things you should be doing…” Just then I saw a monster shadow push up on the reef and slowly start working its way towards me. I managed to wrestle my line up and put a decent shot on the fish. I watched the shadow move towards the fly, I bumped it once, I saw the fish react, felt a tug and I set the hook. I came tight and the fish disappeared into the darkness. I was stoked, I just came tight to a bone in the middle of night… and then I started pulling on the fish. I thought to myself “not a bonefish… its big, but not a bonefish.” As I pulled the fish closer I finally realized what I had hooked, it was a giant spotted porcupinefish. By far one of the coolest fish I have caught on fly, in one of the coolest settings I have ever flyfished, at night. It was killer… 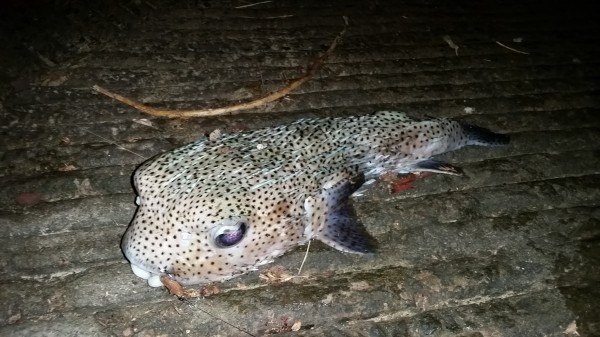 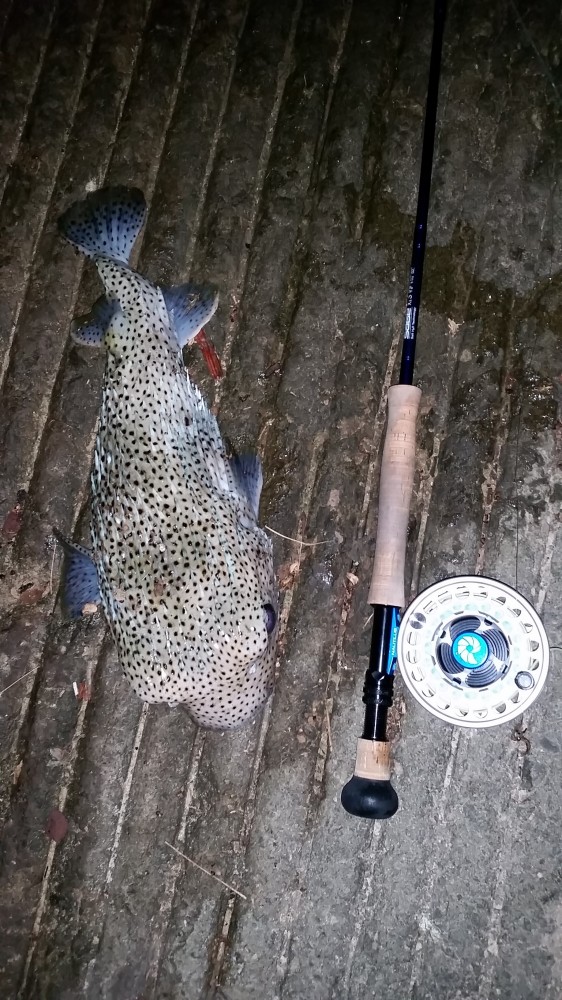 Hawaii was an amazing trip. My wife and I had an absolute blast exploring the islands, and I was grateful for the amount of time I was able to fish too. Although I never landed a bonefish I caught so many new species of fish for myself the trip was nothing short of a success.

One of our last days we went out on a blue water boat and caught a ton of tuna as well. So all fishing styles were covered. 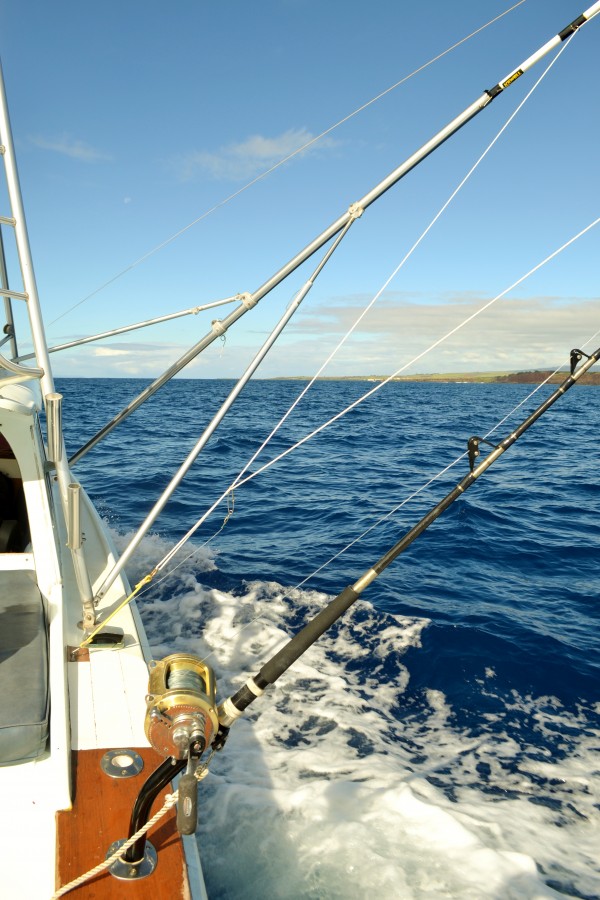 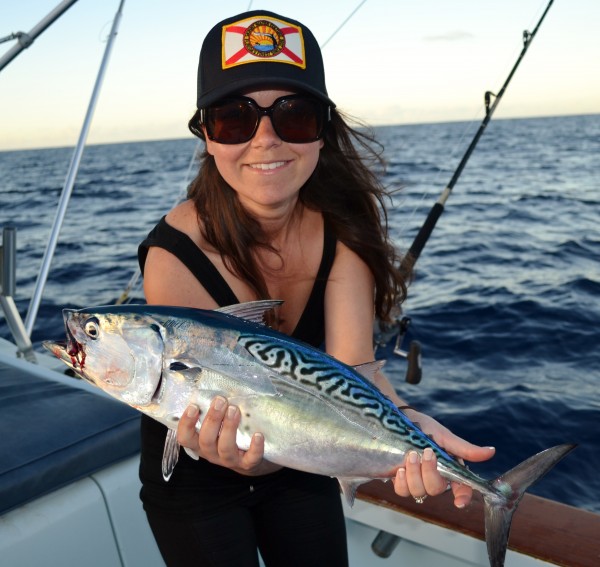 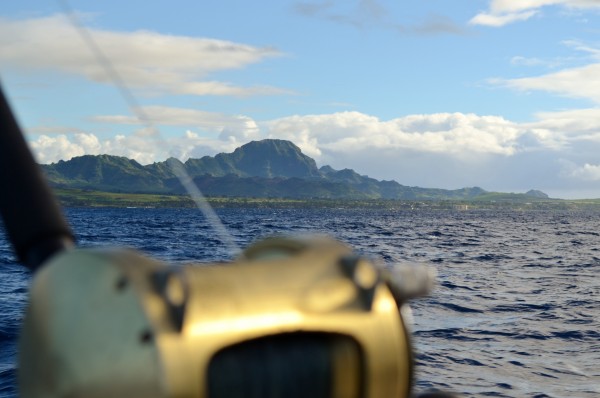 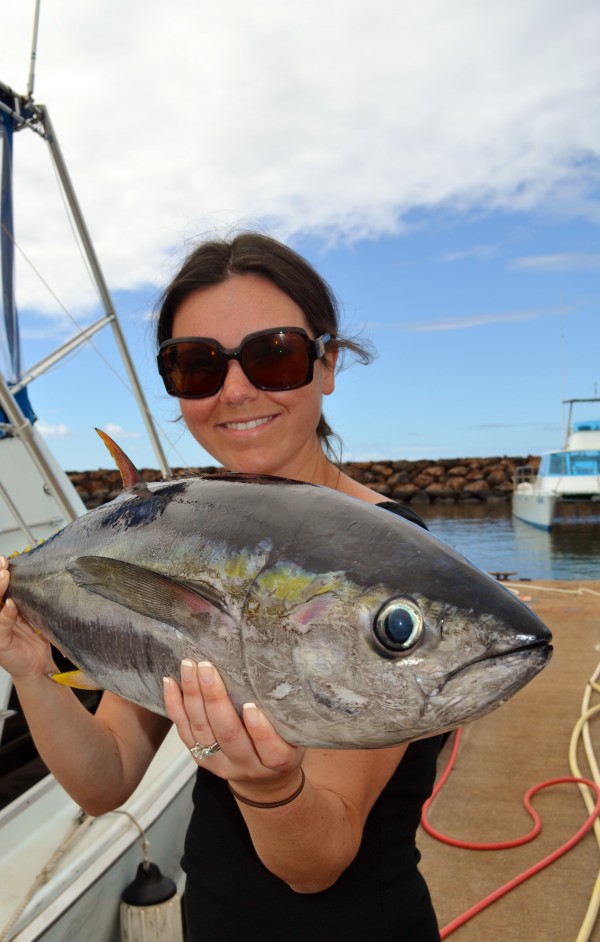 Until next time- Strip set everything….