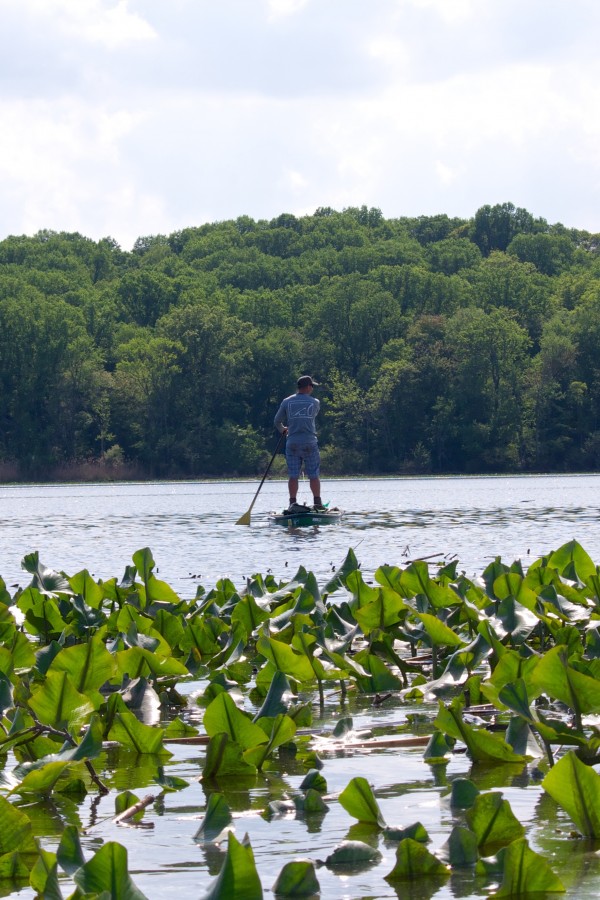 Few experiences can compare to wading and sight fishing a saltwater flat for bones and perms. The water is crystal clear requiring your senses to be at their highest operating capacity as you await that one shot at glory. Sometimes, it can be virtually impossible to see an approaching bone, especially on a cloudy or windy day. The permit are far easier to see in my eyes, but catching them? That’s an entirely different story. It’s been a long time since I’ve played that game and I really miss it. I’ve filled the void in my soul by targeting the freshwater equivalent: cyprinus carpio, otherwise known as the “common carp”. It was the carp that prepared me so well for my saltwater forays in the Caribbean and sight fishing for them reduced my learning curve on the flats. As I patiently await my next sojourn south, I am still practicing. I’ve found tidal carp to be the closest equivalent to the “real” thing and I learn something new about their behavior after every outing. 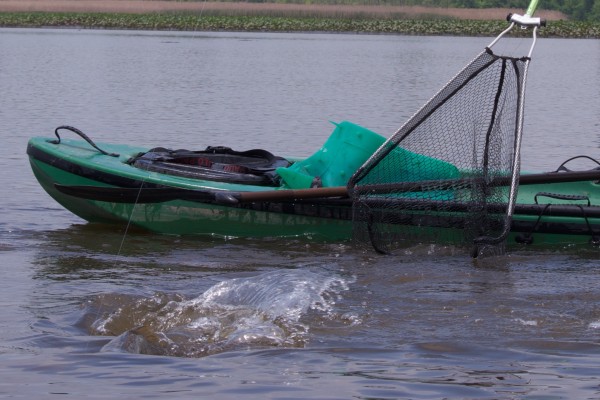 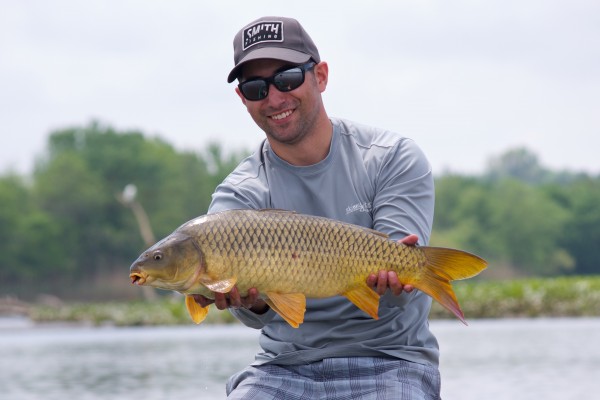 One of the most impressive things about common carp is their ability to adapt to the environment in which they live. In this case, living in a tidal, brackish marsh is a different story compared to living in a freshwater pond, lake, creek, or river. The most obvious variable is the tide and the carp are in tune with every ebb and flow. Their behavior and feeding patterns are constantly changing requiring me to give chase or lose the scant few chances I seldom get. On an incoming tide, they appear out of the depths and spread out like volunteers in a search party. They are on a mission to feed and this is when you’ll find them tailing or lined up in the current sweeping onto the flats. On an outgoing, they slowly retreat with the water, clinging to the last areas of the flat with some depth to them to obscure their feeding patterns. All the while, I am constantly searching for a hint of movement in a mire of chocolate milk. 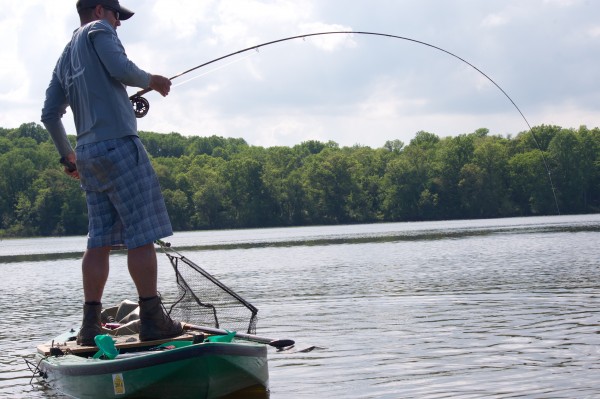 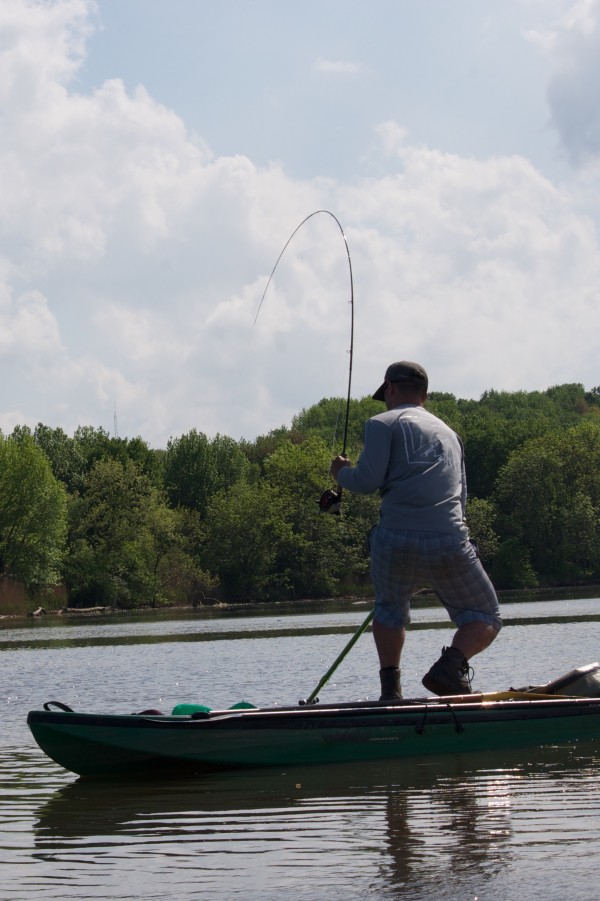 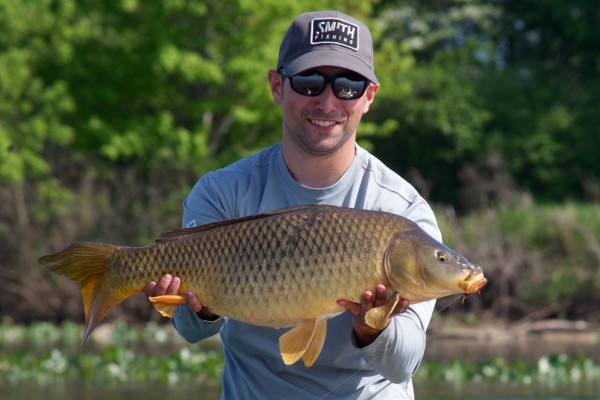 The best time always seems to be during a slack tide. Rather than constantly on the move, the fish seem to chill out a bit and are much more predictable. On a low slack tide, they are funneled into stagnant deep channels where they basically become laid up. In this lazy state, they are readily seen, but attempts at coercing them to a fly are often done in vain. The bread and butter is a high slack tide. All of the water on the flats puts them on the feed. This is when the carp are most comfortable and also when they readily take a presented fly. Feeding fish are easily seen by their mud plumes and I am paddling from plume to plume hoping for a shot. In these situations, the carp stir up the bottom before ascending in the water column to pick off any substrate or aquatic life they’ve disturbed. This equals a state of vulnerability and all of my large fish have come during these moments on a high tide. 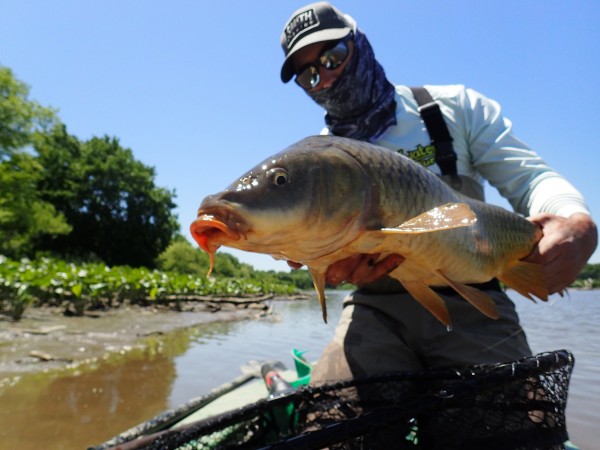 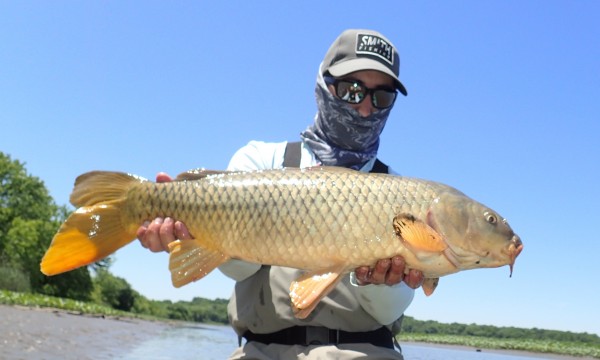 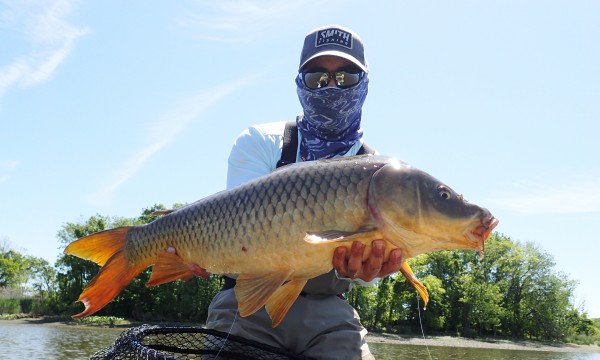 The other variables in the game are common to those that chase bones and permit. All three species require one to spot the fish and track their trajectory before presenting a fly in very quick succession. Any disturbance in that equation often results in a missed opportunity and a spooked fish. In order for things to come together the weather needs to be very good. We are talking sunlight and little to no wind for the best chance at success. Upon hooking a carp, their fighting ability falls somewhere between a bonefish and a permit. Carp are good for one or two strong runs, often into the backing. Unlike bonefish, they don’t give up after those efforts. They become more like a permit, offering a down and dirty struggle before succumbing to your hands. 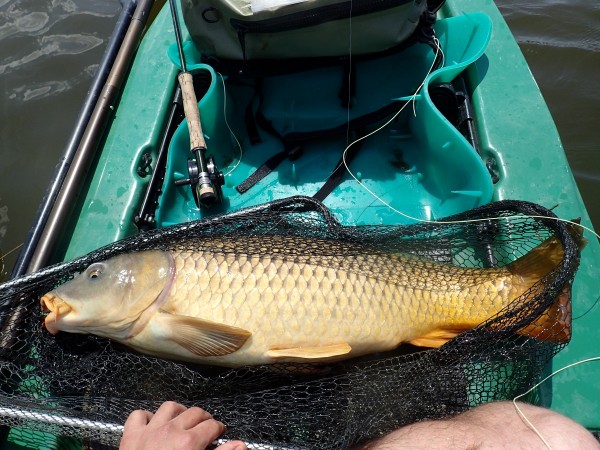 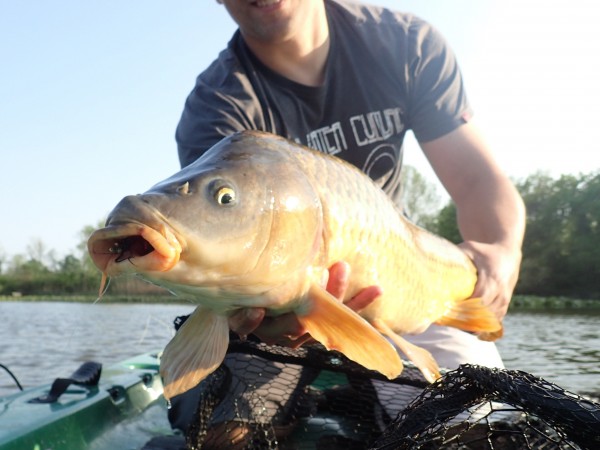 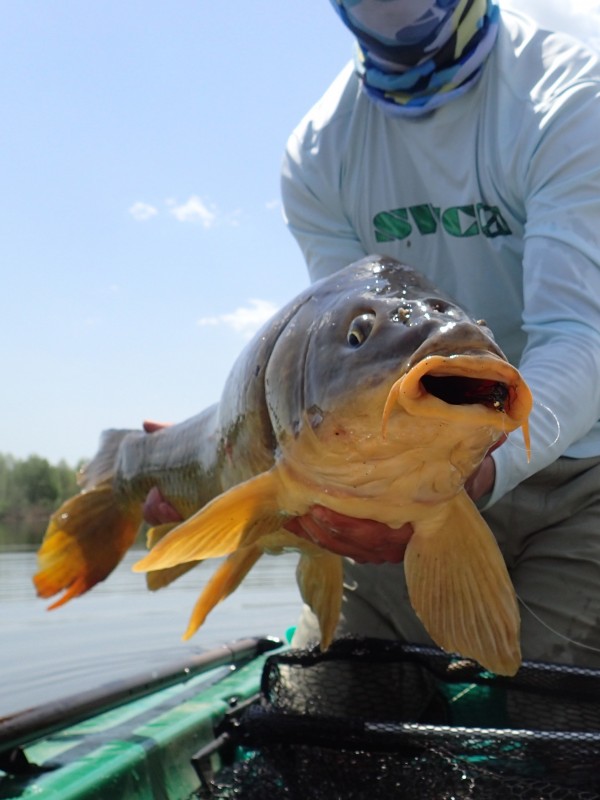 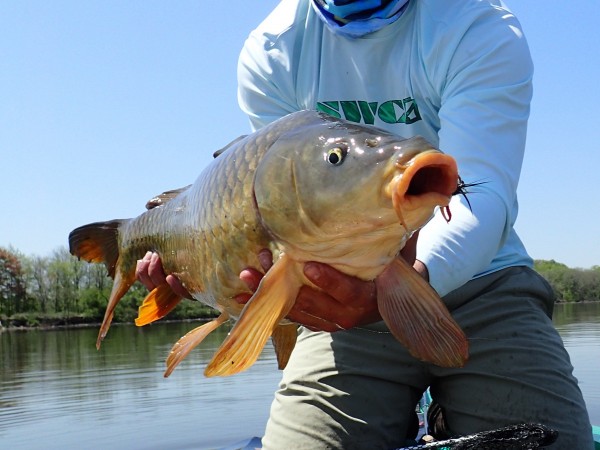 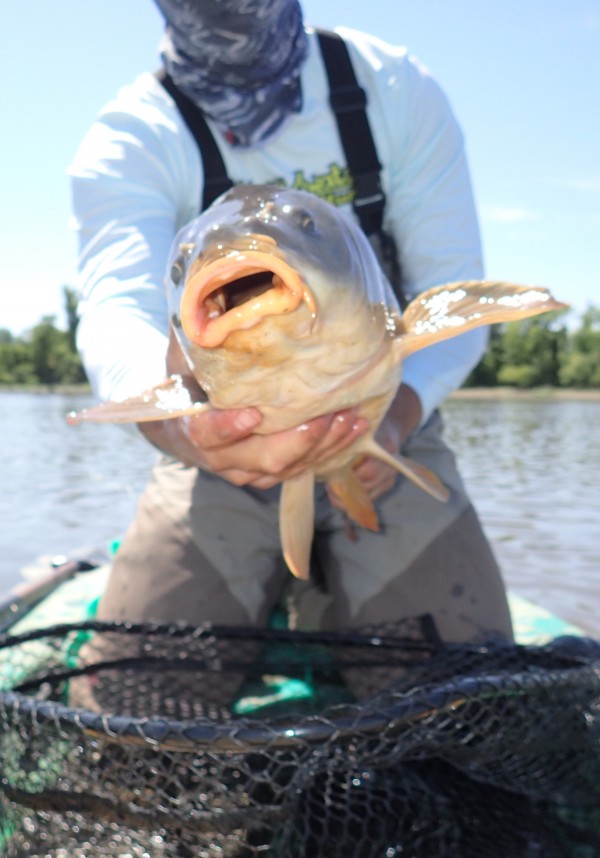 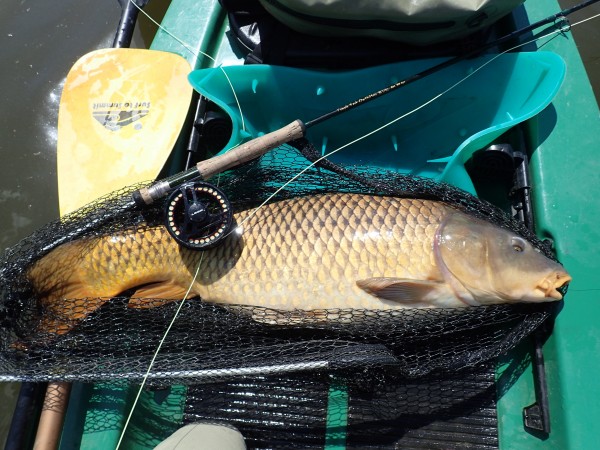 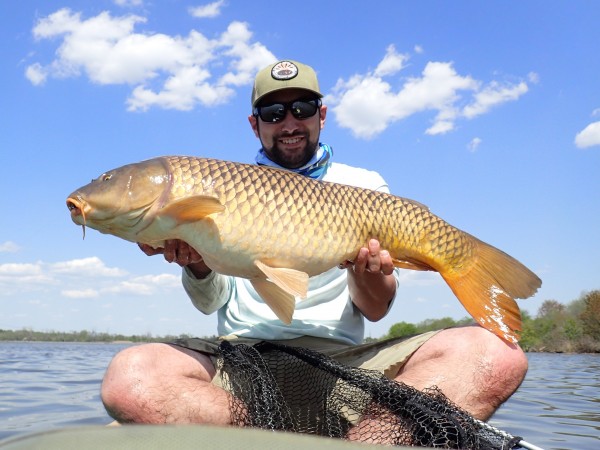 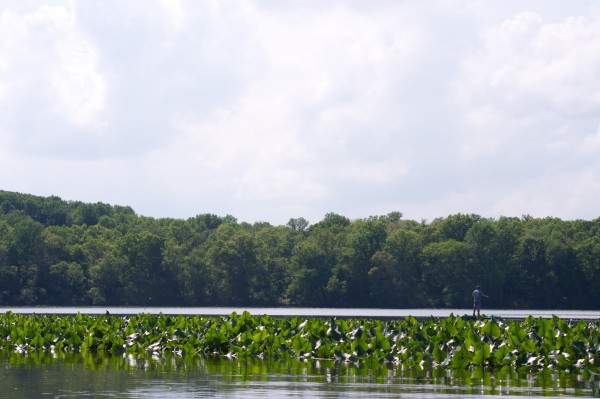 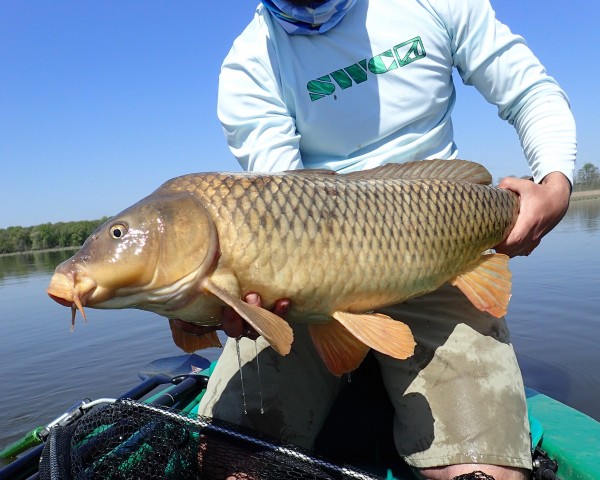 I may not fish the saltwater flats much anymore in a traditional sense, but fly fishing for carp doesn’t get anymore skinny water culture.