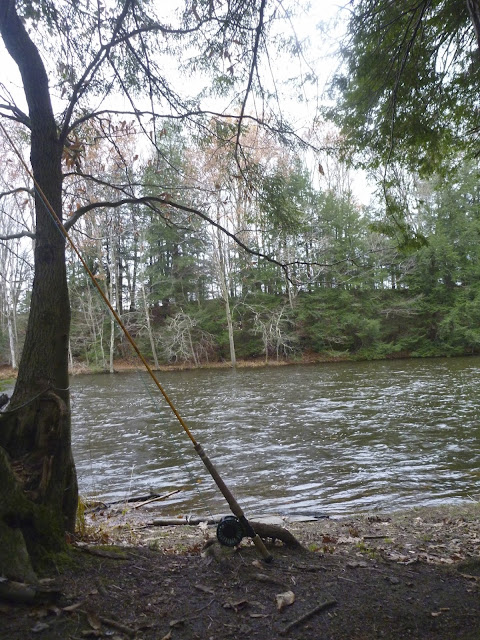 In 2008, I made my first fly fishing trip to the Great Lakes tributaries to target steelhead. I began with 7 hour trips to Erie and later branched out to the equally far Western Ontario tributaries near Oak Orchard. When I finally fished the larger water of the Salmon River, I knew that it offered a lot and was close enough for multiple trips. As the years progressed, the number of excursions began to increase into the high single digits. My fishing techniques began to vary as I branched out with switch rods and later spey rods. In the past two years, I haven’t fished any other water besides the Salmon, and almost exclusively swing flies or go home. Fueling my inspiration and sleep deprived ventures, was the thought of catching the “one,” a large steelhead of my dreams, which can be hard to come by in the non-native hatchery stocks of the Great Lakes. 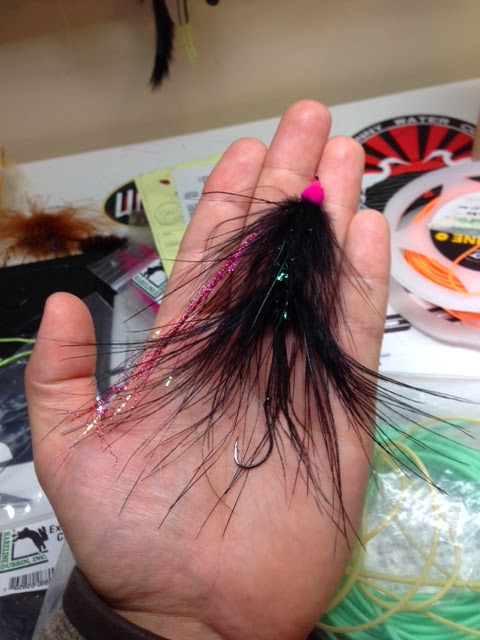 The “one” captivated my mind whenever I thought of, fished in, or tied flies for steelhead. The “one” can be described as a twenty pound steelhead approaching the 40 inch mark. In other words, about as big as they get in the Great Lakes tributaries. A lucky few anglers catch these fish each year and a few adorn the walls of many a sports store. These are the fish that make you shake your head in disbelief, not because they are huge, but because they actually exist. It’s amazing that in the put and take, ethically deprived, and shoulder to shoulder culture of the tributaries, that a fish like this actually survived long enough to grow that large. The “one” is not the fish that the local dude at the fly shop showed you on his phone. You know, the guy that says he caught a 20 pounder, then shows you a picture where the fish is held out so far that his thumb is larger than his head. Those fish are usually in the 14-16 lb. range, which is pretty darn big, but not the “one”. The “one” is often described by Adam as containing enough qualities to garner the use of the quote, “BC shit”. 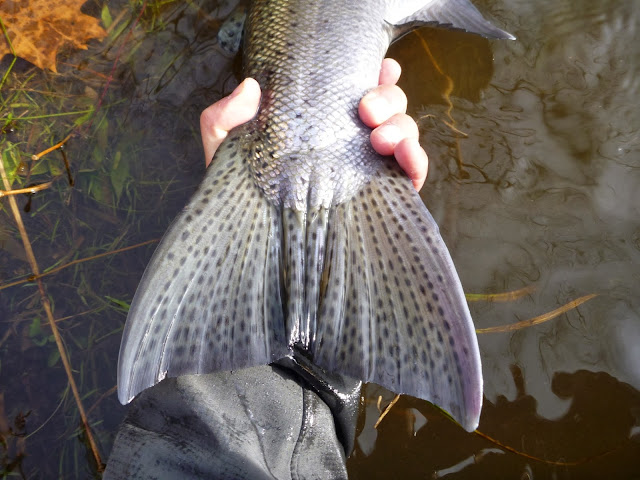 After three trips in late August and early September for kings on the swing, my thoughts turned towards swinging flies for steelhead. My venture began in late October on a two day bender in 1,500 cfs where I only hooked and lost one fish. After some car difficulties, I finally made it up again in mid-November where the flows had ballooned to over 2,000 cfs. The high water conditions perfectly fit my preferred style of casting, with a skagit head and heavier tip. I rigged up the cult classic Loop Yellowline 8124-4 with a Multi 6/9, Rio Skagit Max 575, and the new grip shooter. A little overkill for the typical Great Lakes fish, but on this day, I needed every inch of backbone and turn of the drag knob. 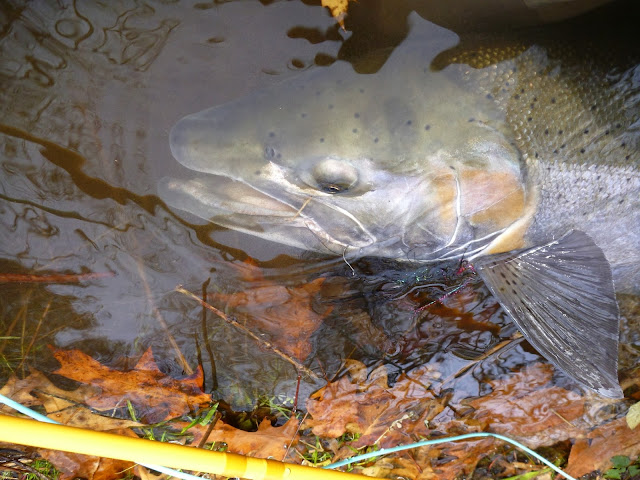 I was fishing a new section of river where it was hard to find a good spot to swing without going for a swim. About a mile from my parking spot, I only fished a few runs and missed a good take on a fixed hook bad hair day. After a long walk with zero places to hop in the water, I came upon a bank that was well worn and barren of any vegetation. There was trash and beer bottles in the woods and the overhanging branches looked like decorated Christmas trees. All good signs that the spot held fish. Mid-pool was a downed tree that broke up the water flow and fed down into a large tailout before emptying into a hundred yards of ripples and rapids to a pretty sketchy bend. I worked the entirety of that run three times from the bank with a 7.5 ft. T-11 MOW, before I decided to change up. There had to be a willing taker in that run, so I switched it up a little bit and put on 10 ft. of straight T-14. 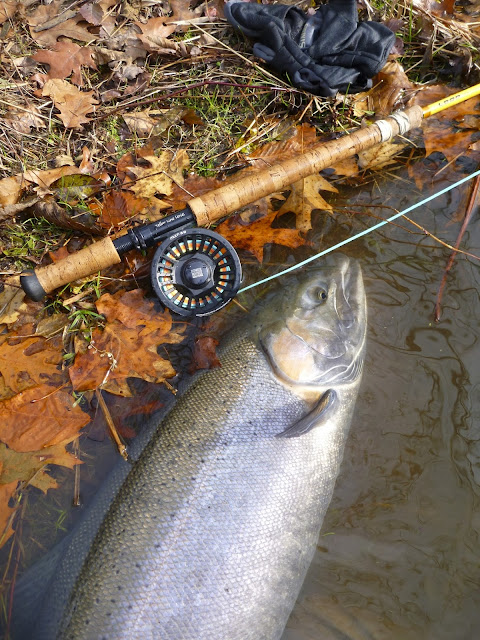 As I perused the 100 or so options in my boxes, my eyes fell on an older fly that peeked my interest. As the only fly I was carrying that I didn’t tie, the pattern definitely stood out and called my name. Matted down and disheveled, the Paul Miller rhea intruder had never been used. It was given as a gift three years ago by an Alaskan guide friend and came from The Fly Shop in California where they ran for 19.95…each. It was too good looking to ever get wet and had always been passed over. It languished, buried amongst inferior patterns in the depths of fly boxes, wallets, and plastic containers. It’s prison sentence over, its time had come to go for its inaugural swim. I looped it on 4 ft. of 12 lb. maxima and had a funny feeling as I watched its action in the water. I took off my pack and laid it on the bank, but not before I grabbed my camera and forceps. 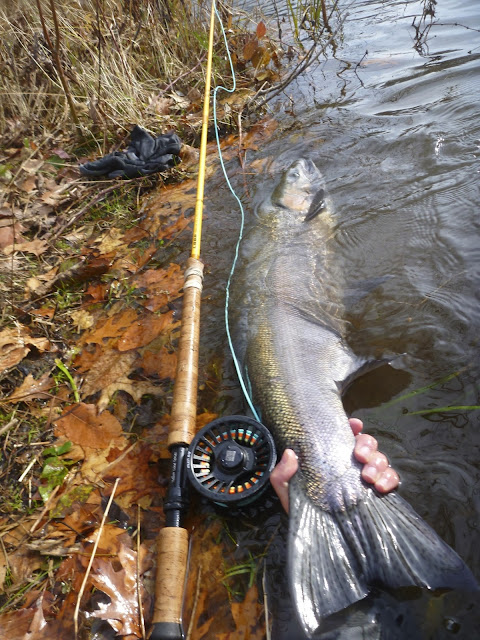 The cast and swing that worked is unique to the skagit style of casting that allows one to get a deep swing and a big fly in a tight spot. I gave a short cast upstream and into the middle of the run (directly out in front of the log) where there was a slower seam. I immediately mended upstream and let more line out of my guides. I elevated the rod tip keeping the skagit head off the faster water directly in front of me while my t-14 sank deep into the middle of the run. After a few seconds, I laid the head downstream of me and into the fast current to create a belly that would swing my intruder broadside through the gut. A second after my fly began its swing, I had the pull of all pulls.

I immediately felt several deep shakes before the fish took off over the tailout and into hell. My backing burned the inside of my fingers as I began a brisk trot down the bank. Halfway, I reached a major decision point. I truly thought I had snagged a salmon in the tail and contemplated breaking the fish off. I glanced back at my pack alone on the bank and then down at the brisk run I would have to wade into.   A large log jam blocked my path that was partially submerged by the 2,000 cfs of water. My backing arched towards the logs as the fish moved towards the bank 200 ft. away. I had to move the line out of the logs and then over them as I trotted downriver. I climbed up onto the logs while saying a silent thank you to my korker’s jetty soles as they dug into the bark. I dismounted into a waist deep soft eddy and easily worked my way downstream until I could not wade anymore. I stopped at the farthest spot I could go. I turned my drag the last few notches and arched the rod. The first breach of my fish was just a tail, a good sign, but hard to tell with it so far away. The fish was about ten yards away from the next tailout and that sketchy bend. I could not let him go any farther, so I eased up enough to get him to come upstream. He thankfully obliged.

As the fish began moving upstream, I loosened my drag a little and began reeling in the line. I waited until the steelhead was directly across from me before I started to re-apply normal pressure. The second breach was completely out of the water. With the sun in my eyes, I just saw a long dark shape. My heart sank a tad as I realized I had a large late run salmon that missed the party. I took my time and slowly worked the fish into the soft water behind another set of logs. My wading had muddied the water enough that I did not see the fish until it emerged directly in front of me. When it did, I can’t truly describe the feeling that coursed through my veins. I can tell you that I began screaming incoherently and my legs began shaking uncontrollably. When my hand reached down and could barely grab the base of the tail, I squealed like my eight year old self on Christmas morning when I got Donkey Kong Country from Santa Claus. 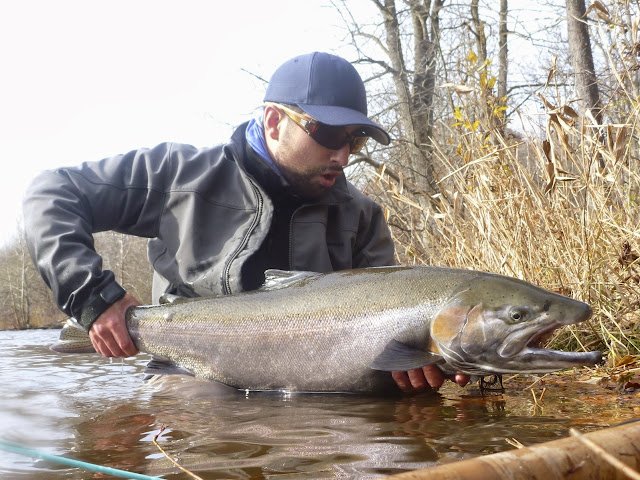 After I released the largest steelhead I had ever caught, I went through a series of emotions that brought tears of joy. Several years and hundreds of hours on the road to reach steelhead takes a pretty heavy toll physically, mentally, and financially. During some work weeks, I returned like a zombie, only to repeat the entire process the next weekend. I lost track of the number of times I was shut out swinging flies as I slowly learned casting and swinging through simple trial and error. You wouldn’t believe the number of times I was low holed or had guides park their drift boats in the middle of my swing. I was the nice guy finishing last because I always went out of my way to not to get in the way of others. This fish erased any hard feelings and brought nothing but pure happiness. I sat on the bank for a good hour and just soaked in the only period of sun for the next three days.

I later remarked to Adam, that I would never catch another steelhead out of the Great Lakes like this one. I was immediately rebuffed, as Adam simply said, “it could happen on your next cast”. I guess thats Steelheading. You can spend days of your life with nothing to show for it and then experience ten minutes of glory that enlightens, inspires, and fuels a few more years of insanity. Days of casting, walking, and driving might bring you to a spot on the river where its simply the right time, the right fly, and the right swing. As steelheaders, we fish for those moments and revel in them when they actually happen. If you put in your time, you’ll eventually reap what you sow.