The King of Spring

Most people who would read this blog think of spring and immediately ready themselves for Tarpon Season. But to me and a handful of others, there’s a whole different beast that grabs our undivided attention and makes our blood boil long before those silver kings migrate up the coast. For those of us who wake up way too early, walk countless miles of swamps and palmettos in total darkness and get goosebumps at the first sound of a spring gobble… Turkey season is the drug of choice, an addiction we cant kick and sure as hell cant explain.    I was on a job in Port St. Lucie and only had Sundays off. So for the first 3 weeks (except Easter Sunday) of turkey season, I would get off work at 6:30pm and haul ass across the state back to Dunedin. Getting home around 10pm I would spend some much needed time catching up with my girlfriend and try to get to bed around midnight so I could get up at 4am and head to the woods.

I was hunting a new place that I had never been to before so there was no usual spots or honey holes, only a promise from a friend that there were turkey on his property. I spent my nights after work looking at Google Earth and trying my best to pick apart this property and find at least a good starting point. Arriving at the property for the first time at 5:30am, I loaded up my gear and set off quietly into the woods. Finding my spot that I located on the map, I settled down and waited for daylight and to hopefully hear that thunderous gobble from a near by tree.

Daylight came and sure enough, there was a few gobbles maybe within a 2-300 hundred yards from me! I sat and waited, making a few calls doing my best to make them believe there was a hot N ready female waiting for that anxious Tom. Twenty minutes after that last gobble, I got to lay eyes on two longbeards that would be the source of frustration and anxiety for the next several weeks. I spent the next couple weekends making that Saturday night drive for that Sunday morning hunt only to leave humble and somewhat humiliated. Finally that job came to an end giving me a little time off until the next one started. I vowed that I would spend every chance I could in the woods in pursuit of those two birds. Teaming up with my good friend and top notch turkey call maker Jeff Erb, we spent the next handful of days chasing those birds with only having a few close calls. Our best shot was ruined by a nanny doe and a few youngins, who took a curious liking to our decoys and to the best of our understanding, ran off those two Toms that were making their way to us. 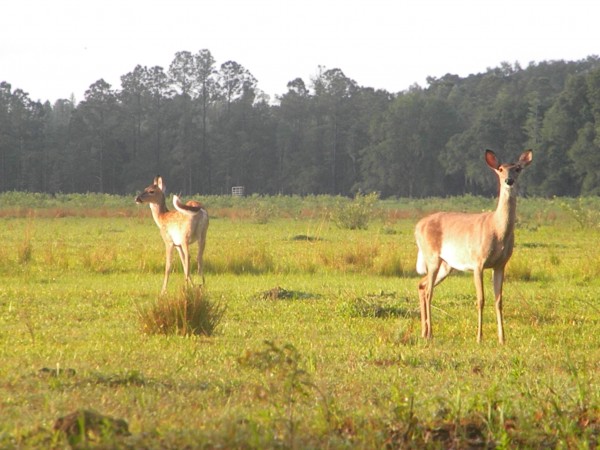 The next few hunts those two birds kept a good distance from us. One of the birds who had the longer of the two beards put on a daily show of gobbling and strutting to our calls while the other was much more disciplined and seemed to call the shots as to where they would travel. No calls or decoys could bring them within range and we went home with nothing but stories and memories.

Wednesday came and Jeff couldn’t make the hunt so I set out solo on a mission to get the best of one of those birds. I picked up a new hen decoy the day before and swapped it out for my jake so I would have two hens, hoping to sweeten the pot. Daylight seemed to come fast and i scurried to get set up and settled down before the birds showed up. Day breaks and I hear no gobble and see no sign of those two birds, which up until that morning showed themselves almost predictable. Finally I spot a hen making her way back to what I believe to be her nesting spot, she paid no mind to my calls as she was on a mission to nest. An hour or so goes by and still no beards then finally I spot movement, two young jakes… not the birds im looking for. I call to them anyhow and they stopped to take a look and kept on their way. I spent the next several hours texting (complaining to Jeff that it wasn’t going to happen today), Facebooking, Instagraming, whatever I could to keep myself entertained. It was getting late and I was about to call it quits when I see a hen wander back out into the pasture to my left. She wasn’t a target, but at least it was something so I picked up my call and tried to get her come check me out. I let out a few yelps and she stopped and took a look then kept on her way, I yelped a few more times and again she gave my decoys a look but didn’t seem interested in making friends. I changed up my calling and threw some clucks and purrs with a softer yelp and that got her attention. She changed direction and came straight to my setup. I stopped calling so I wouldn’t get busted and there was a little breeze which made my decoys wobble and move enough to keep her interested. I spent the next few minutes taking pictures and filming her with my phone (I’m no Dan Decibel) while she tried to get my decoys to talk to her. 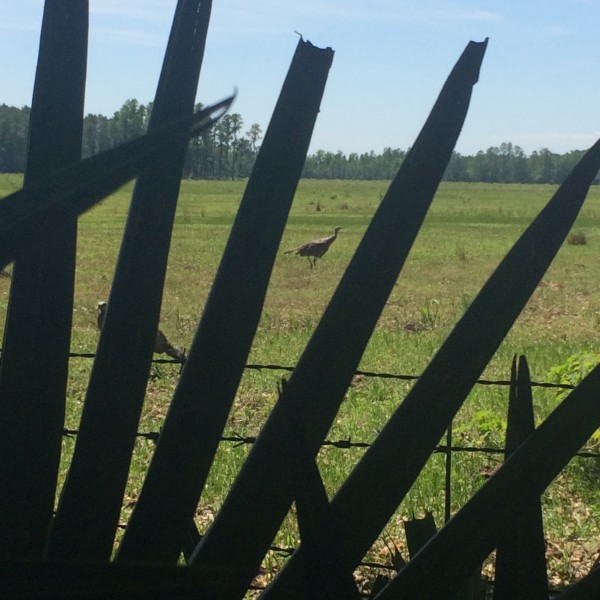 After about 3 or 4 minutes of a one way conversation she lost interest and started to walk away.With her being my only source of anything turkey I put the phone down and reached for my call. As I looked over for my call, all I could see was those two longbeards walking straight to towards her and my decoys!!! With not much going on I had leaned my shotgun against a tree next to me and was way out of position when those birds came in. I slowly set my call down and reached for my gun, surprisingly I was able to get in position to make a shot without spooking those birds as they were focused on that group of females. They were now in range and even though the one bird had a longer beard I opted for the other who we saw as more of a trophy due to him being a noticeably smarter more disciplined bird. I ran a bead on the bird I wanted, settled my breath and dropped the hammer… game over!!! The other bird took flight and disappeared to live another day. 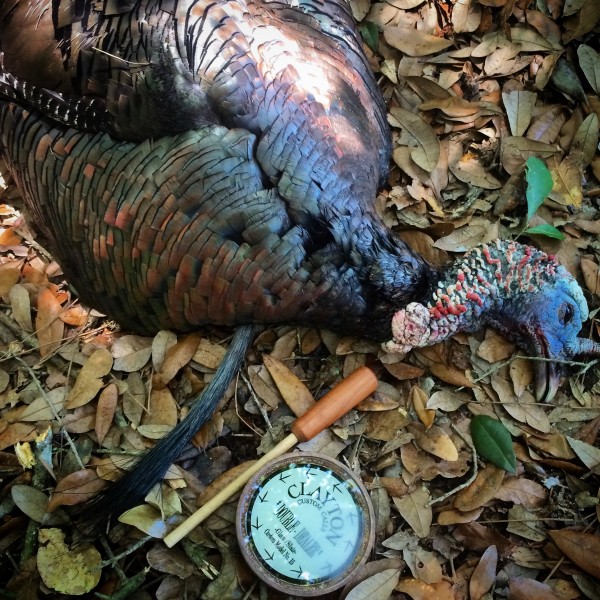 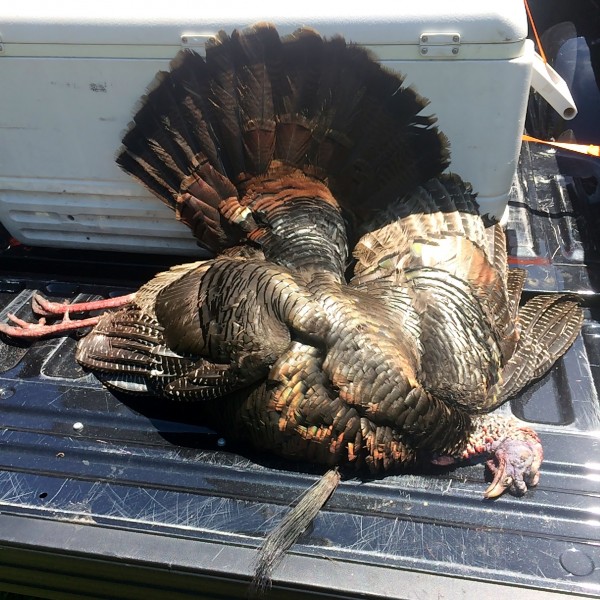 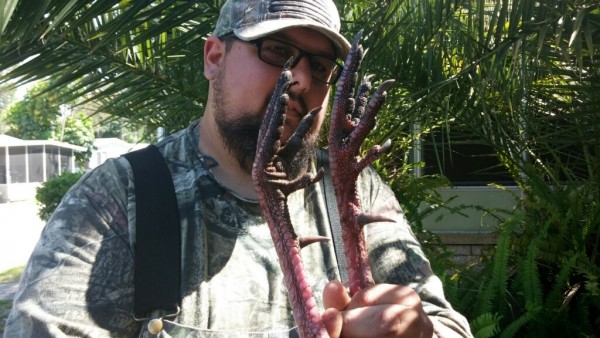 This was by far my most memorable turkey hunt and This fine Osceola measured out with  10″ beard and 1 1/2″ spurs!!! I didnt have a scale be he felt close to 18-19lbs…

With turkey season over this weekend and  my bird fix taken care of,  its time to get geared up for tarpon season…