This is a shared experience told from two points of view and from a few places in time. Italics differentiate between the speakers. Enjoy. 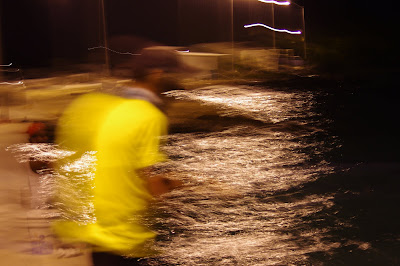 Dream sequence
The small mullet darted from the shadows, frantically searching for structure. It zigged and zagged and eventually darted underneath the concrete dock I was standing on, sight fishing to laid up tarpon in the dark. A split second after the small fish disappeared beneath my feet there was an unseen explosion of water from under the dock. The commotion settled and the only sound that remained was the whistling wind. The two locals hand-lining for small jacks swung their dangling feet up out of the water as they exchanged a nervous glance. I didn’t know it yet, but I had just been introduced to a legendary, supposedly uncatchable fish we’ll call the beast.
There we were, in a tired stupor, gazing up at an unknowable amount of stars, entirely spent from four days shuffling in the sun. One rod laid between us, rigged incase any of us could muster a few shots at tarpon between two groups of locals hand lining. The tarpon weren’t there, they knew better. Nonetheless, my brother and I decided to have at it, and positioned ourselves indian style at the end of the dock. We reminisced, having a heart to heart, about fish lost during the trip. Talk eventually turned to giant barracuda, the beast, and all the close follows of the previous days and the ensuing heart break. My big goal for this trip was to catch a monster barracuda, the kind that dwarfed the juvenile 30-50 lb. tarpon we caught in the night. The ones that followed them in really close, thinking about going for a slice, leaving us to marvel and throw every streamer in our box in vain.

That was one of the most surreal and insane moments I’ve ever experienced, anywhere. It was as if we summoned the beast by speaking of the mullet at our feet. Then, watching it hunt, oblivious to us, and watching it miss, while the possibility of catching it bloomed in our three minds simultaneously, to using Adam’s musky technique and having it actually work… I’ll never forget any of it. I have an imaginary picture of Mark kneeling in the shallows, somehow tailing this fish under the water, his eyes draw yours to the terrifying and beautiful monster as the flash from the camera illuminates them against a pitch black background. That is good enough. 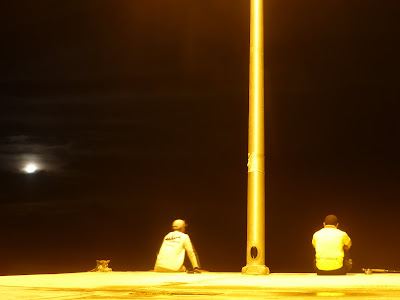