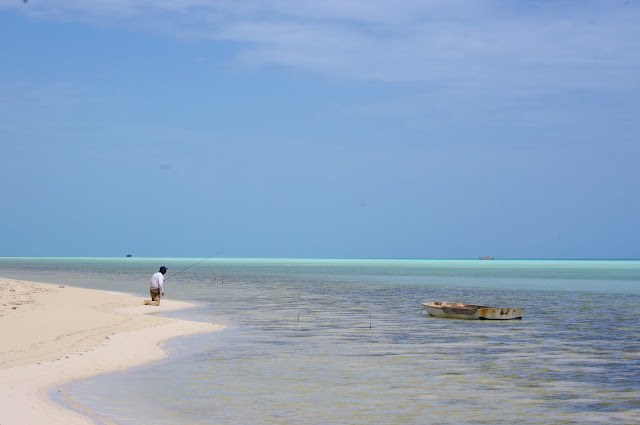 The sun crept slowly up on the horizon showering the inside of the tent with beams of light. Tossing and turning, Adam and I refused to get up until the light edged up our torsos and shined directly on our faces, beginning our morning ritual. We needed to get up and into the car as soon as possible to avoid the onslaught of bugs. Our safety net was the dock two miles away. Jutting a hundred yards out to sea from the mangroves, it contained the only respite from the marauders and a stiff cross wind. It also allowed us precious time to change, eat, brush our teeth, and air out the rental of foul smells and bugs. We rushed out into the sand, woke up Matt in the hammock, and hopped into the rental. 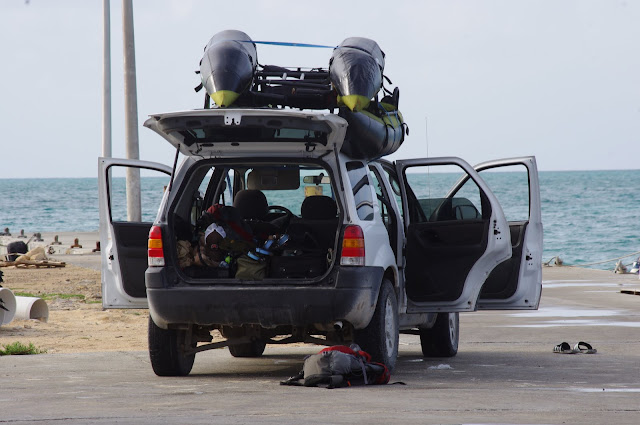 Airing Out The Rental.
On the dock, eating our breakfast, we decided to vary our plan of attack and give the main drag a break. We decided to hit up the beaches and stalk large single bonefish in skinny water. Matt opted to take out one of the pontoons and drift out in the deeper water. 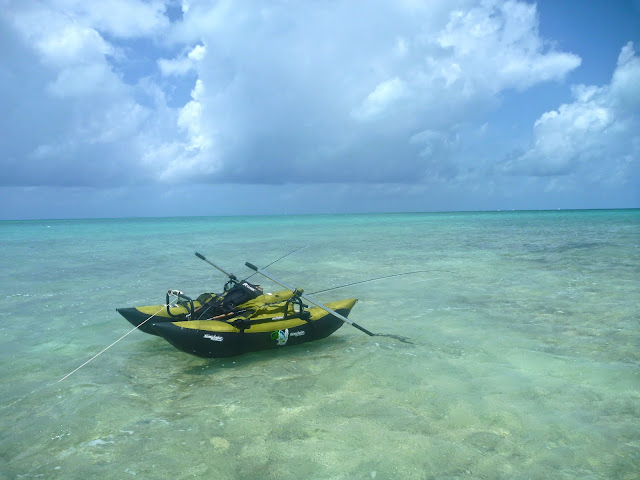 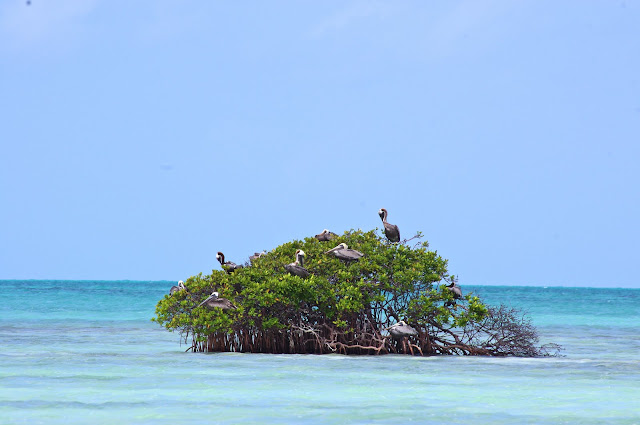 Their Tummies Done Full Up.
Dropping Matt off, Adam and I fooled around on the first section of beach. On this beach, the bottom consists almost entirely of sand extending over a hundred yards from the shore. You can often see bonefish coming from a considerable distance, but the sun had receded behind the clouds starting a long game of peek a boo. For ten seconds, we had great visibility, then someone would turn out the lights and you couldn’t see anything. Despite the conditions, we each had chances at fish but failed to get their attention. We headed back to the car and headed to a different beach down the coast. Matt continued to play in the distance. 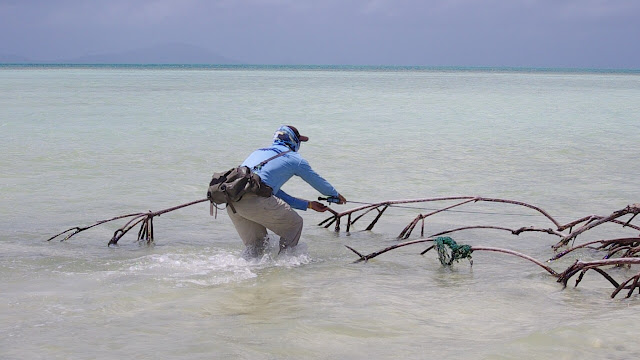 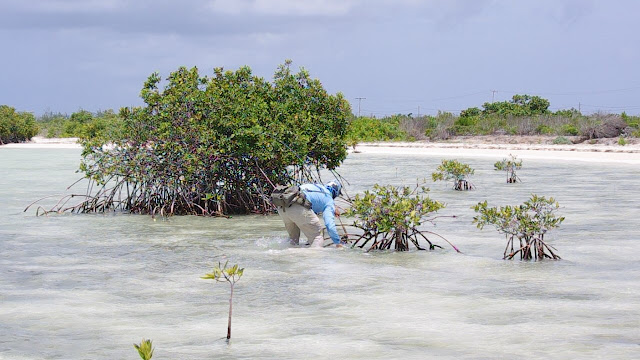 Smart Fish.
At the new section of beach, Adam and I started our walk. It was more of a creep, with two sets of eyes scouring the shoreline for any sign of activity. When the sun came out, we slowly moved and immediately stopped when the sun went behind the clouds. It helped considerably that we saw fish on the previous beach because we now knew what to look for. The silhouette was extremely faint. We walked together at first, and I spotted a very small fish a mere 20 ft. from us and it took me a few seconds to realize that it was on the back of a bonefish. I made my presentation and watched the smaller pilot fish run off the bones back and take my fly. I waited for him to spit it out and made another cast. The bone accelerated and took my fly but I pulled it out of his mouth. He promptly spooked.
Since I had the first shot, I let Adam out front and gave him some space to operate. I back tracked down the beach to see if I could get another shot at the same fish but it was not to be. I resumed my trek and came down to a mangrove on the water. From the right came a large silhouette slaloming between mangrove roots. If the fish wasn’t moving, he would have been completely invisible. I dropped my fly ten feet off the last root and waited for him to close the distance. When he was in range, I popped my fly twice and he was on it. I was in by backing in mere seconds and was treated to another long run before I regained my fly line. Bringing him in for a quick land he accelerated a third time directly under the very roots where I saw him. I had a quick flashback to my first bonefish I ever caught (the incident) and did not want a repeat. I gave chase and again went for the land. For the fourth time, he went on a run and under another mangrove, this one much more dangerous. Safely navigating that obstacle, I landed a great bonefish. 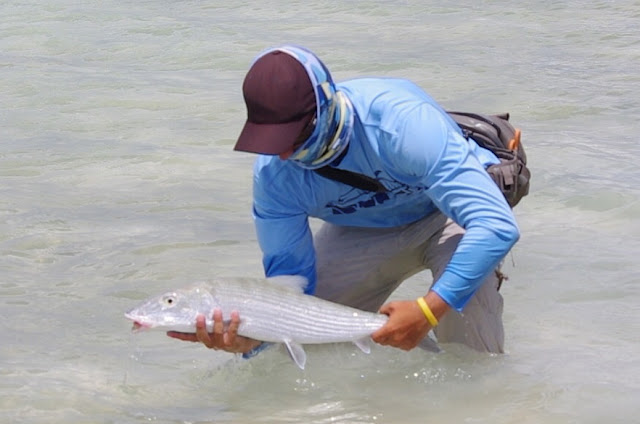 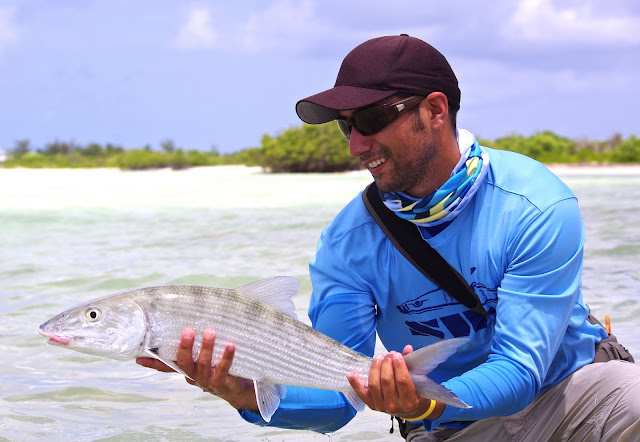 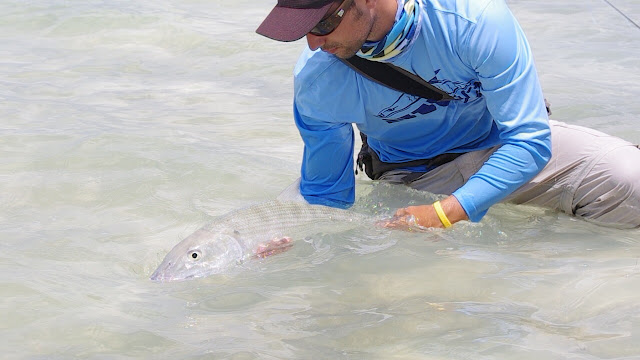 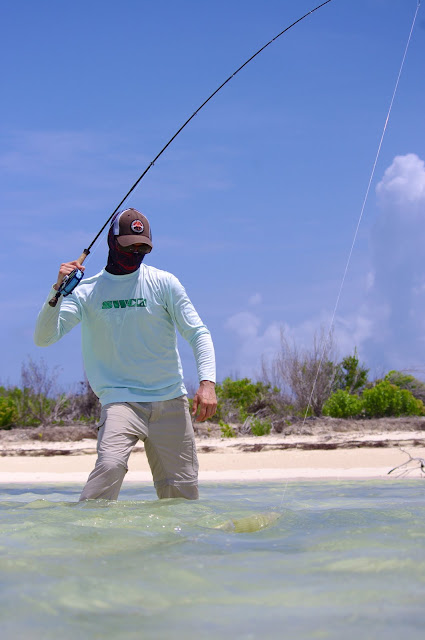 After discussing the previous events, Adam headed out in front. I waited again and checked my knots to make sure everything was ready to go. I resumed my crawl, and soon spotted a fish coming into the shoreline. I called out to Adam and he trotted toward my direction before dropping at the waist to hide his silhouette. I pointed out the fish, but he was considerably closer this time and over top the mottled bottom making him disappear. I could barely see him and gave Adam directions to cast 20 ft. directly left  of a lone mangrove sticking inches out of the water. As he made the cast, Adam spotted the fish. His crab landed almost on top of the fish’s head. It didn’t matter. The bonefish turned and engulfed it. It took off to the horizon, prompting Adam to say, “He’s angry, ohhhh, he’s angry”! 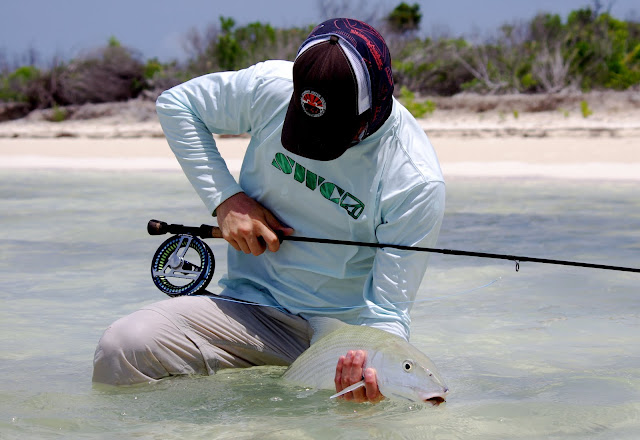 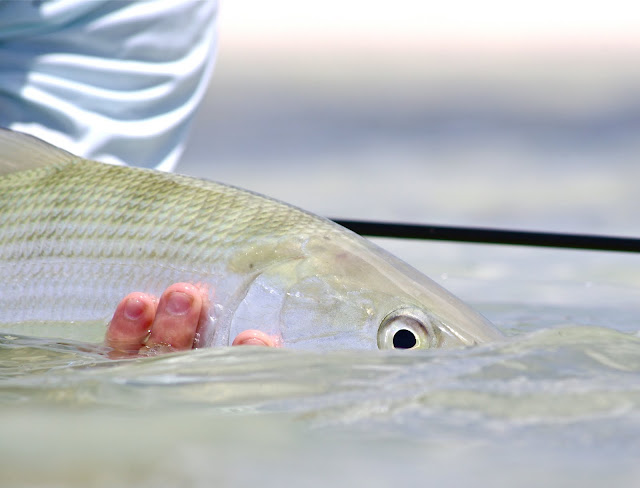 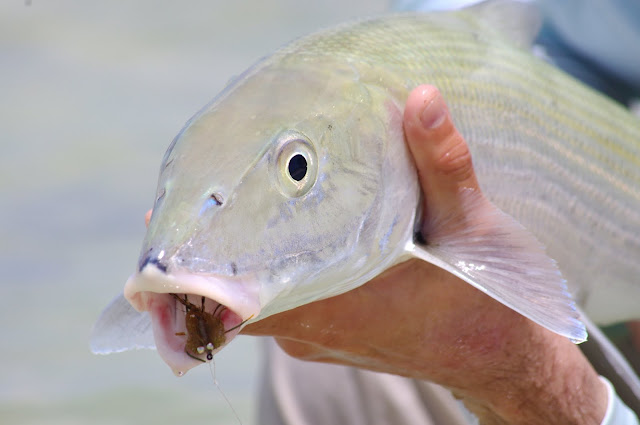 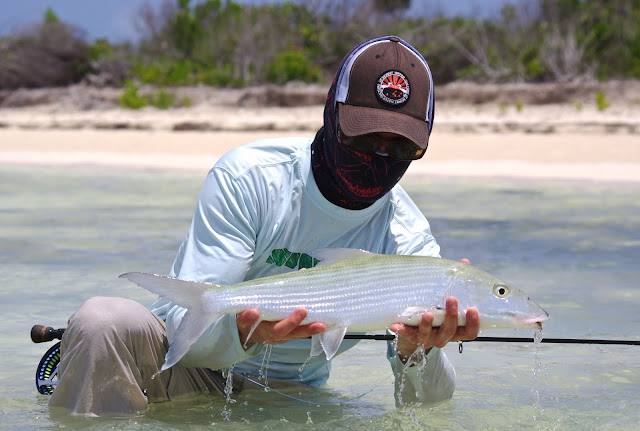 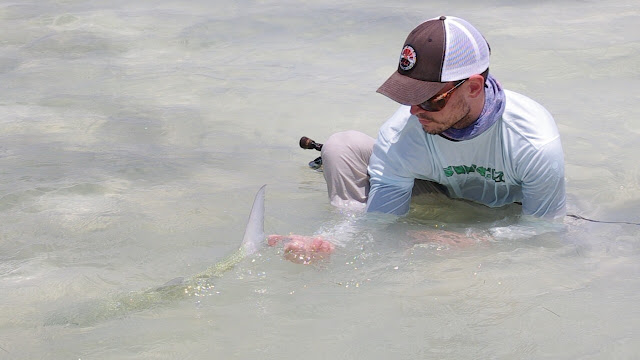 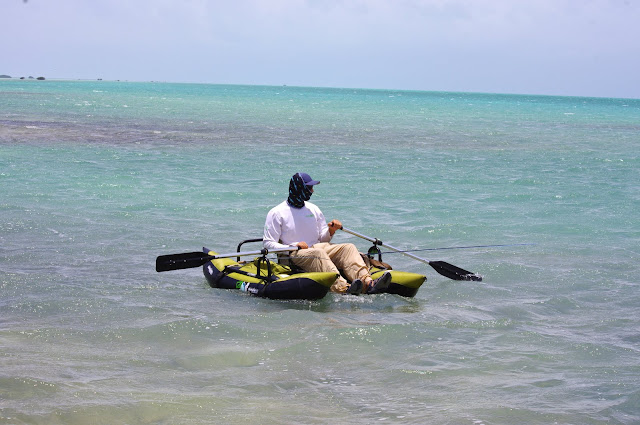 We picked up Matt a considerable distance away. He told stories of tarpon busting bait and bonefish swimming under the pontoon completely oblivious to his existence. He had trouble getting ideal positioning though in the stiff winds. We took our routine mid-afternoon siesta feasting on Red Bull and potato chips before heading back to the beach. Immediately after busting through the mangroves, we spotted a tailing fish right in front of us, its fins glistening in the sunlight. Matt took the shot. As he stripped in the bonefish was on the fly visibly following. Matt stripped set on what we all thought was a bonefish. However it was a pilot fish, which we took to calling lieutenants. The only bonefish we saw that evening darted off the flats in a violent symphony of water. 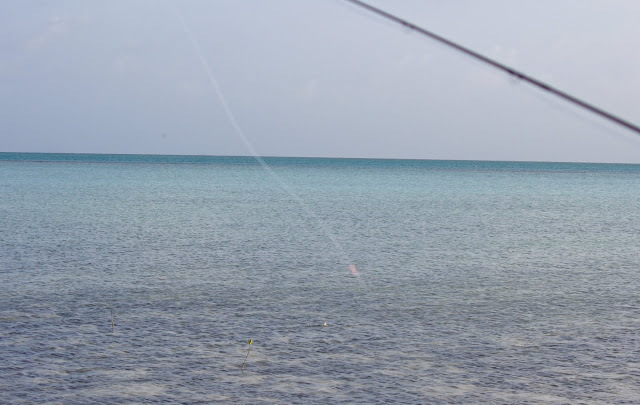 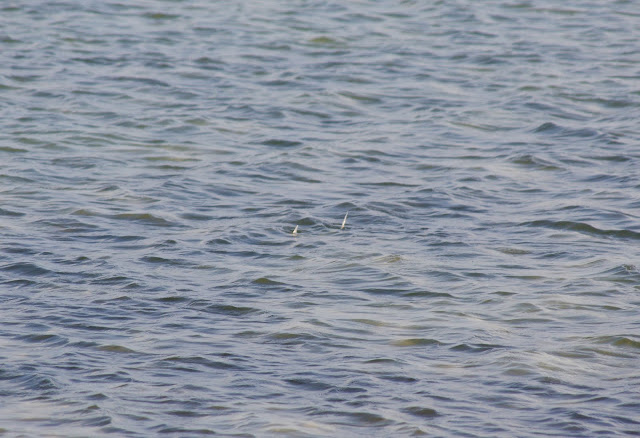 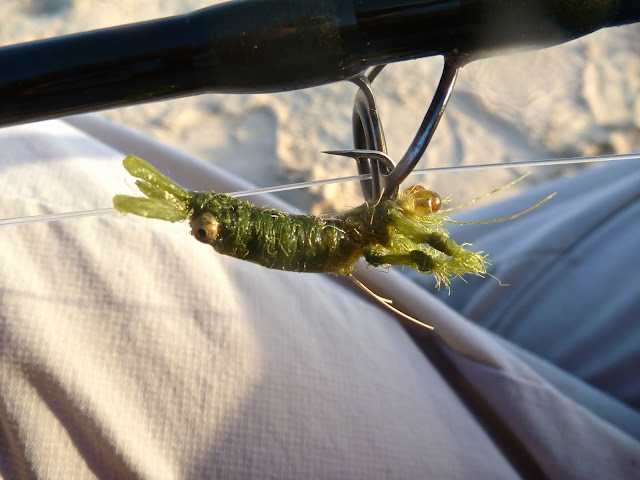 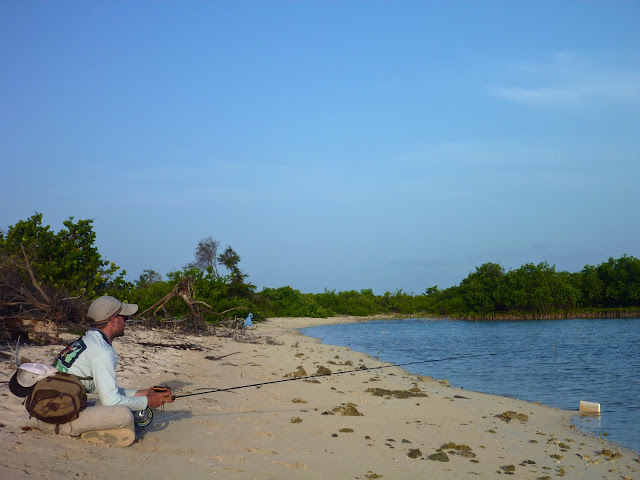 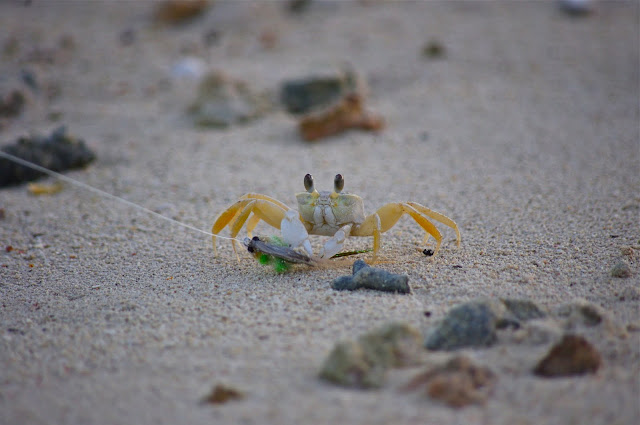 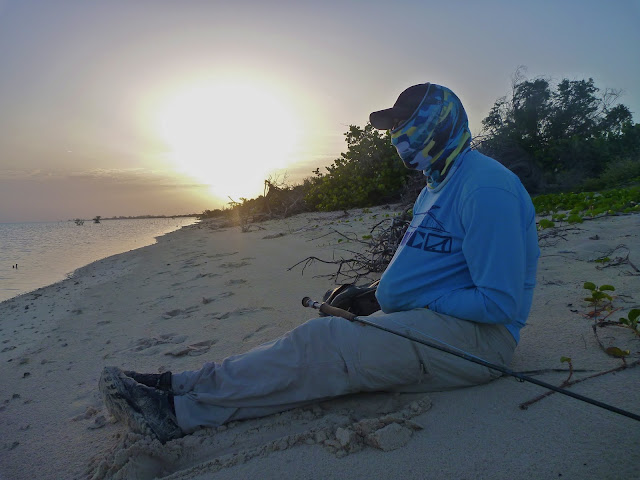