If you ever wondered what the offspring would look like if you crossbred a kayak and a jet ski your imagination has come to fruition. The Surfango looks just like any another kayak, but didn’t your mama tell you never to judge a book by its cover?

The Surfango is as deceptive as a 300-lb offensive lineman that runs a sub 5 second forty. Other than its awkward shape, lack of tankwell, and state registration stickers plastered to the side you wouldn’t think twice about racing this short, stubby kayak to your fishing grounds if you both showed up to the launch at the same time; it happen to me on one occasion. You won’t get much past trying. You’ll be left in its motor wash before you ever realize what hit you.

Robby and I talked about fishing together for a while now. He wanted to explore new areas. I wanted to see how his jet powered kayak performed in my neck of the woods. We planned a trip.

We’ve crossed paths before, but this time it wouldn’t be a race, or a lack thereof. We made a long run to our spot. Robby struggled to keep from blowing by me. My canoe isn’t exactly the fasted boat, but he knew he’d better follow me. There was no shortage of navigation hazards in the area. Oysters have been known to eat people’s lunch. We couldn’t afford to get off the channel.

Once we got to our fishing area we immediately started seeing and catching fish over shallow shell throwing topwaters. We caught a handful of fish each and then decided to push into smaller backlakes in hopes for sight fishing opportunities.

We had trouble seeing fish other than one lonely school. The tides were high but falling. We were running over lots of fish so we started blind casting.

We started getting bit. Most of the fish were on the upper end of the slot. The fish were positioned near the mouth of drains. We kept pushing deeper into the marsh and we caught fish all the way to the end before we called it quits.

The Surfango paddles like a graceful bathtub. Its hull shape doesn’t lend itself to covering distances. If you’re one who likes to carry the kitchen sink you’d be disappointed. A minimalist approach is necessary due to the lack of storage.

Floating draft is not bad. It drafts a little more water than the average kayak, but certainly not as shallow as my canoe until it’s on plane. On plane it drafts just a few inches of water. There’s no contest in speed compared to any fishing crafts its size. He clocked his fastest jet powered kayak at 37 mph.

At the end of the day I took his boat for a spin. After I got comfortable at the helm I had a big smile on my face zipping around. It was like cross between riding a roller coaster and playing a video game. The inner child in me came right out. 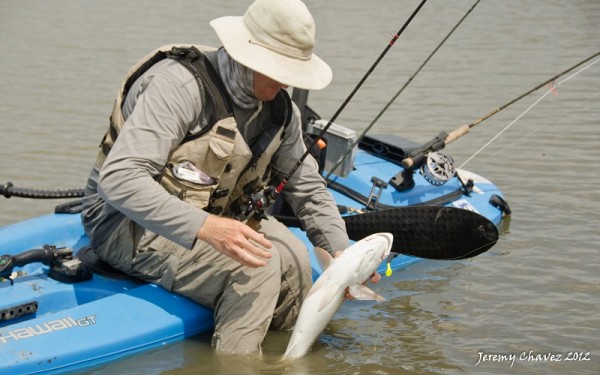 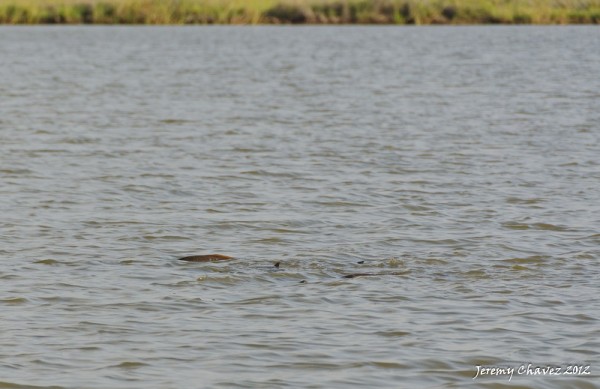 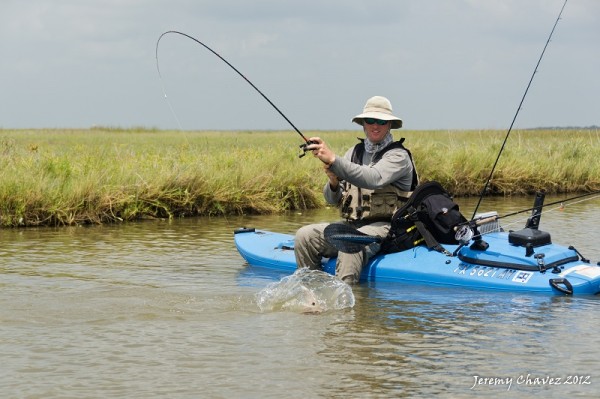 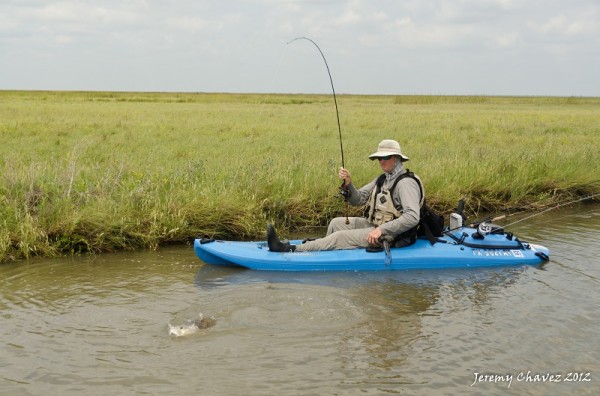 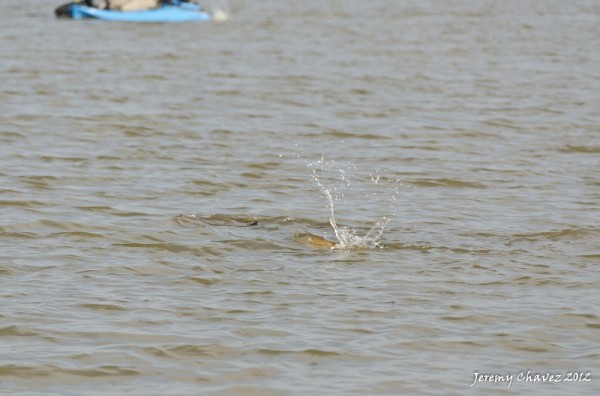 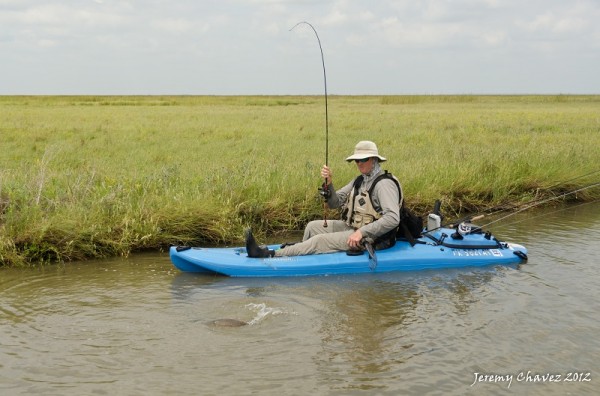 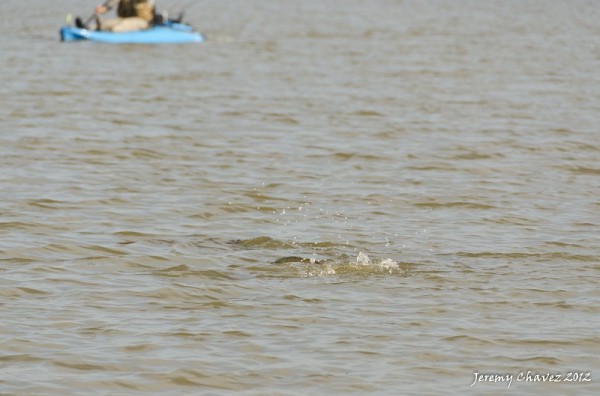 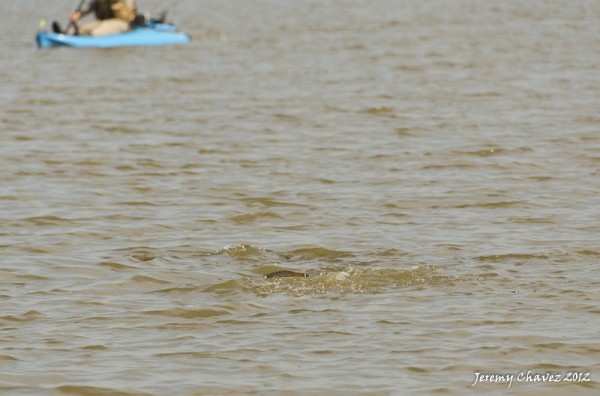 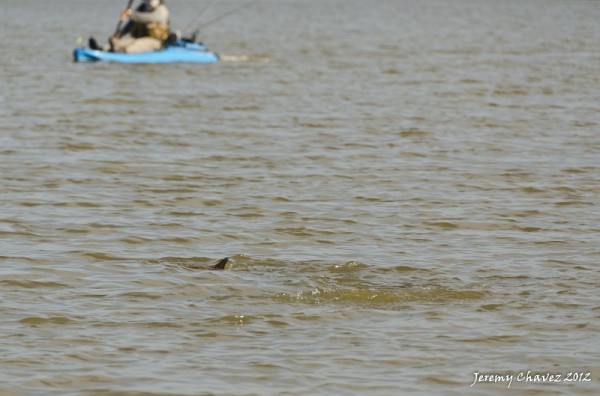 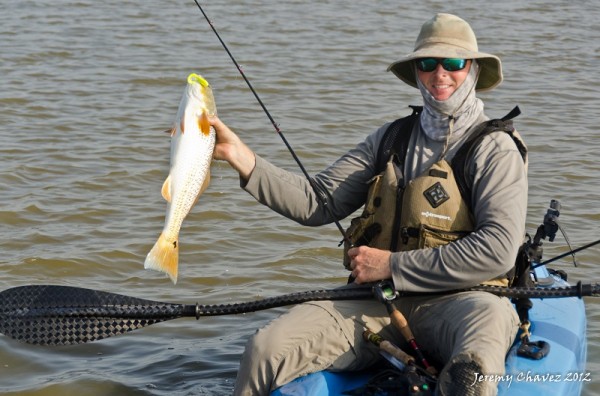 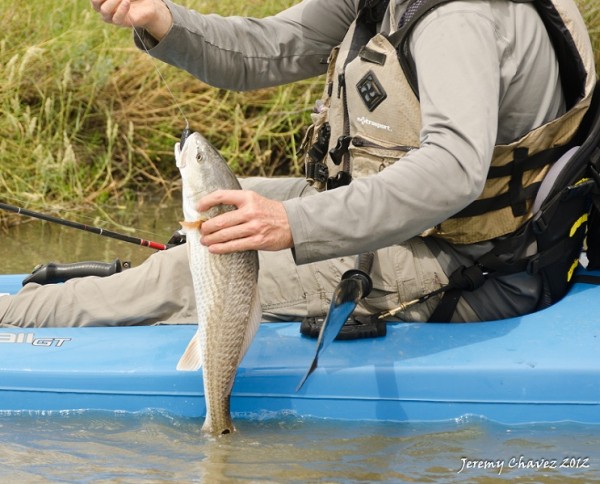