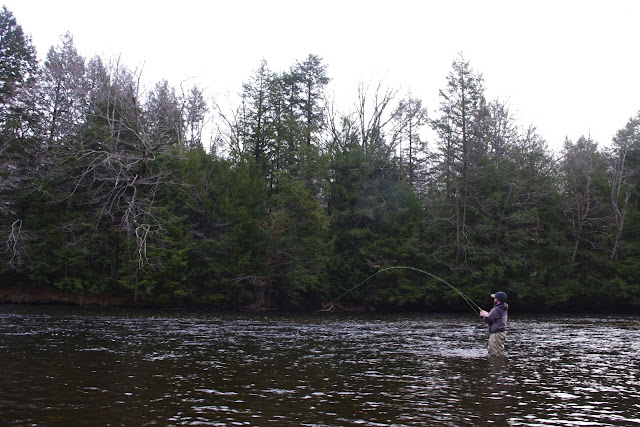 A long, hard, and cold week had me looking for an emergency escape hatch around every corner. Not finding one, I sent Adam a text with a semi-desperate plea for him to stop thinking about carp, and instead think about accompanying me on a trip north for some steelhead. It had been two months since our last hellish trip. With no switch rod, waders full of holes, and zero preparation, I finally pulled the trigger and decided to go. A few freezing days with wet feet would be well worth my first steelhead of the fall.  A suicide run and six hours of driving later, I found myself on my favorite stretch of the Salmon River swinging flies for anything willing to oblige me. I finally found my escape. 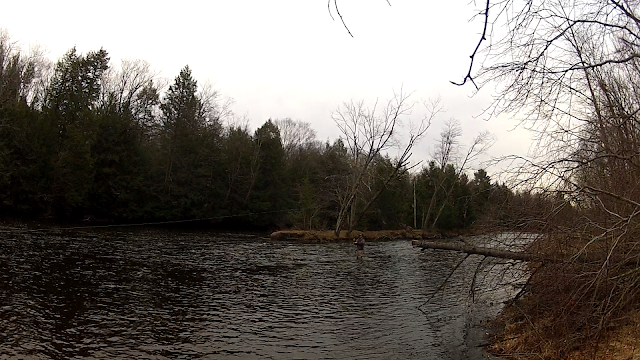 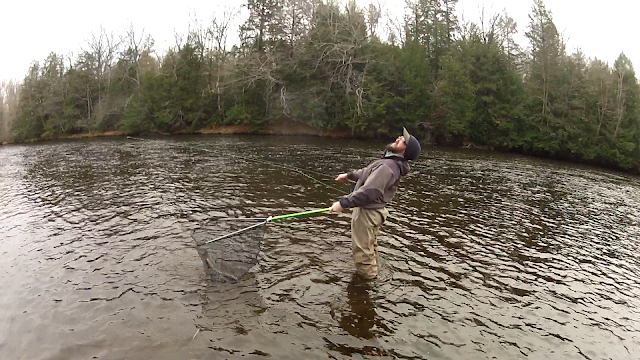 Adam struck first hardcore nymphing the head of the run with a single hander. The fish blitzed downstream approaching the backing knot before turning back. When Adam slid the net under the fish, he arched back and let out a roar of approval. A rare display of emotion from a certified “carpologist,” who claims he’d rather fish for carp, than slay a tarpon. I don’t think he means it. I think he just likes having a bend in his rod. A short time later, he had another fish on the line. This time, he even cracked a smile. He was actually enjoying himself. 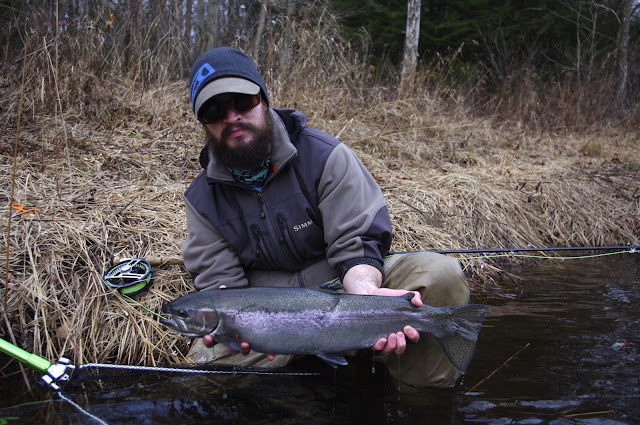 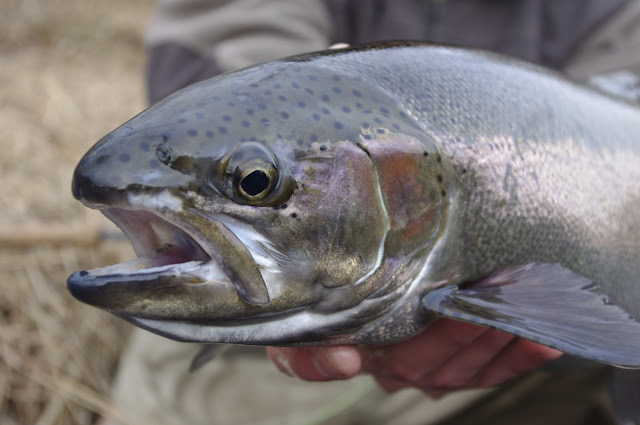 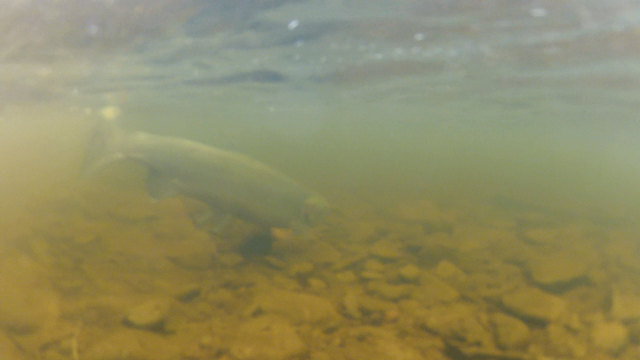 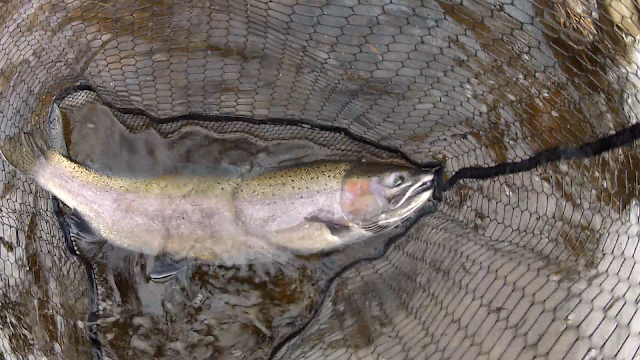 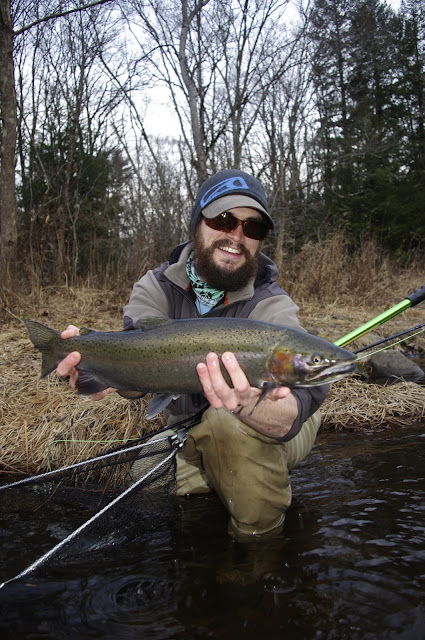 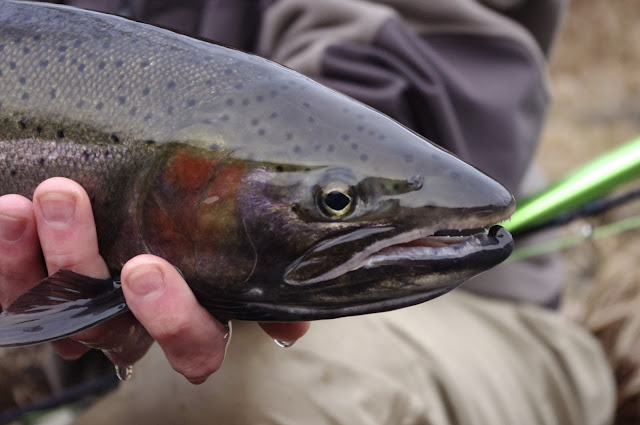 I was using my Loop Yellow Line 8124 armed with a Rio Skagit Short and a 2.5/7.5 T11 MOW tip. I experimented with a few different flies before settling on something I tied a few nights before, a miniaturized version of Pat Cohen’s Squitruder. I heard he had a few good hookups on it, so I set down and tied two smaller versions with basically the same materials. It looks awesome in the water and I highly recommend checking them out. After making my way through the run without a tug, I added a bead in the loop knot. On the first cast, as my fly made its way into the slack water, I had my big pull. The chromer jumped twice before succumbing to the net. I was pleased to say the least. 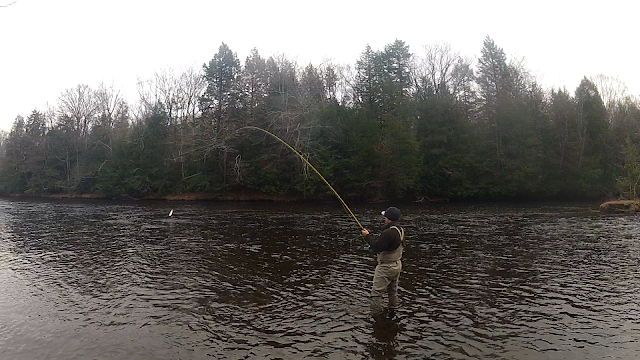 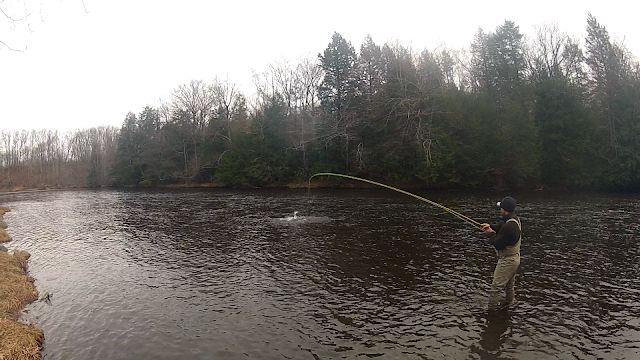 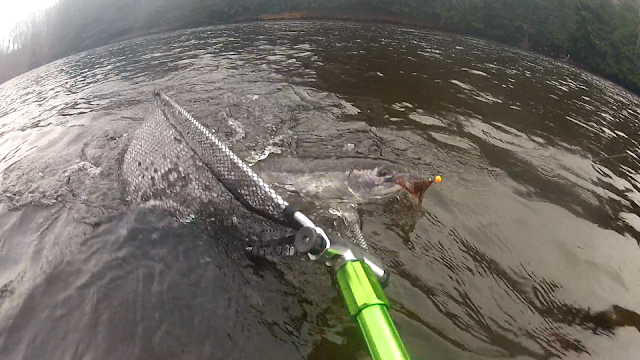 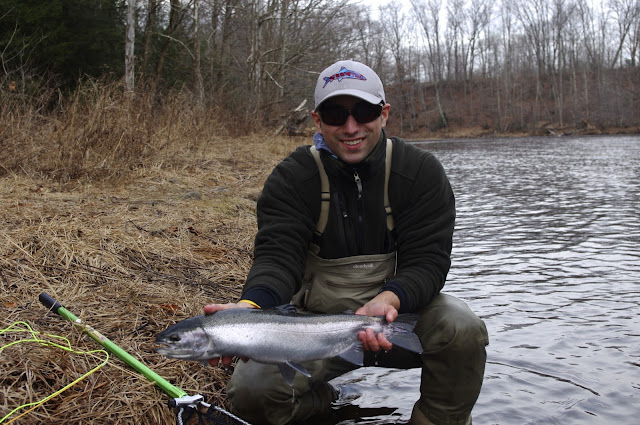 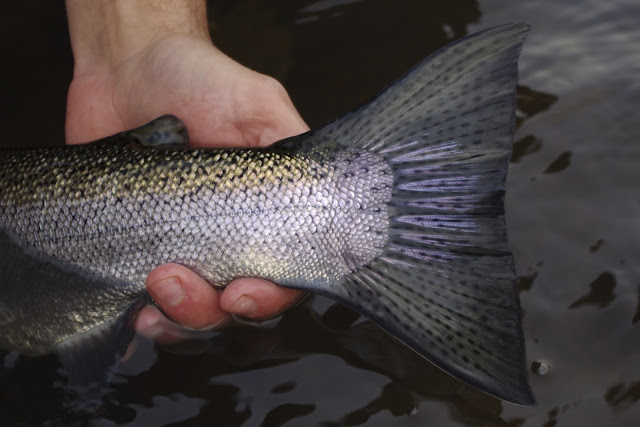 From there on out, Adam and I took turns swinging flies. Neither of us really enjoyed destroying our shoulders nymphing single handed, so the swinging became the preferred method for the rest of the afternoon. When it was my turn, I worked my way down to the tailout where I had a good bump but nothing on the end of the line. I re-casted and put a nice belly in the line to speed up the swing. In the exact same spot, a chromer hammered the fly. It ran and cartwheeled through the air and dislodged himself from the hook. I missed my second fish but I had my pull, and that was enough.

On another spot in the river, Adam hooked up with and landed a nice fish on an inside seam.  I repeated the feat a little farther out in the hole. However, mine failed to find the bottom of the net. I didn’t mind one bit. 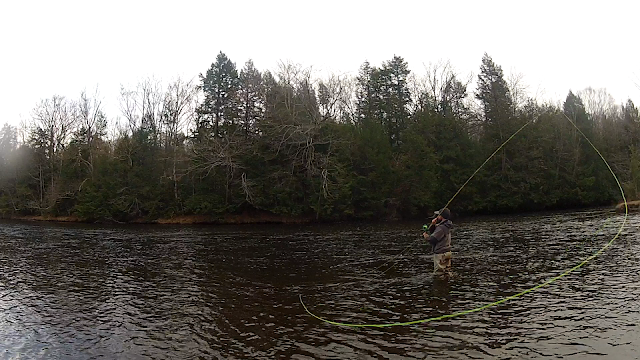 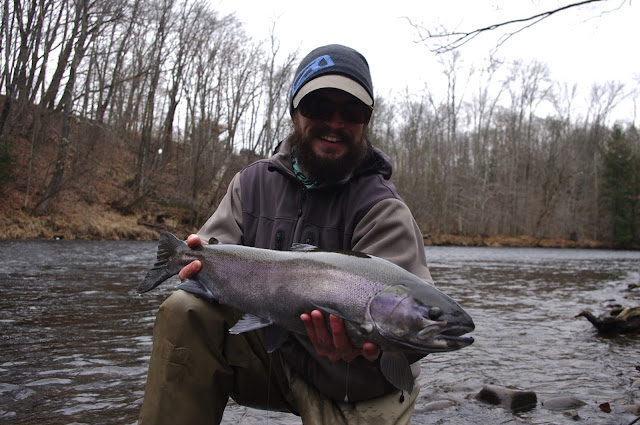 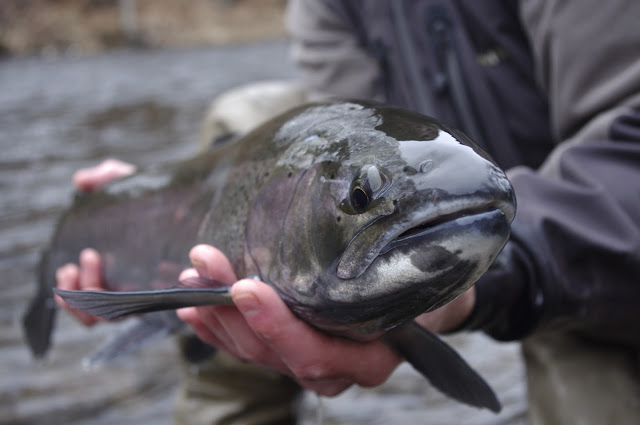 A two month hiatus from the tributaries really tested my resolve as an angler. During this time of year, there is no where else I’d rather be. I felt demoralized after that last trip and had spontaneous urges to go  all the time. However, I remembered that my switch rod was in pieces and my waders leaked. That brought me back down to earth quickly. My last urge couldn’t be stopped and as I wrung out my socks on the back of the truck in below freezing weather, I realized I should have been fishing during those two months. I let excuses get in the way and that is not going to happen again.

My feet were lifeless and my legs felt like stumps as I got in the truck. That night at Walmart I bought some extra tall trash bags and rubber bands. I had high aspirations of delaying frost bite in the coming days.