Sometime around the end of September the season here in Florida begins to change and I personally put on a whole new game face. Casting platforms, fly rods, flies and micros take a backseat to tree stands, bows, guns and camo. The usual late night tarpon runs turn into early morning trips to the woods as tarpon season turns into hunting season…

I got a late start on my hunting season this year due to work and despite missing just about all of bow season I was still fortunate enough to have one of my best seasons yet! Finally finished my last job of the year and with a straight through drive from Joliet, Illinois I wasted no time getting back home to get ready for some much-needed time in the woods. My girlfriend and I were in the middle of moving into a new house when I got back so I had to fight my desire to haul ass to the woods and take care of that. With a majority of the  moving done I loaded up my truck and headed for Middleburg to spend 5 days hunting with my good friend Andrew Perez and his family.

Arriving in Middleburg Friday night I was full of anticipation. Our quota for our usual hunt didn’t start till Monday so we set out to hunt some other WMA’s on Saturday and Sunday. Other than a whole lot of scouting and a bunch of 4 wheel drive in my new truck due to a monsoon of rain they had, there wasn’t much to write home about. 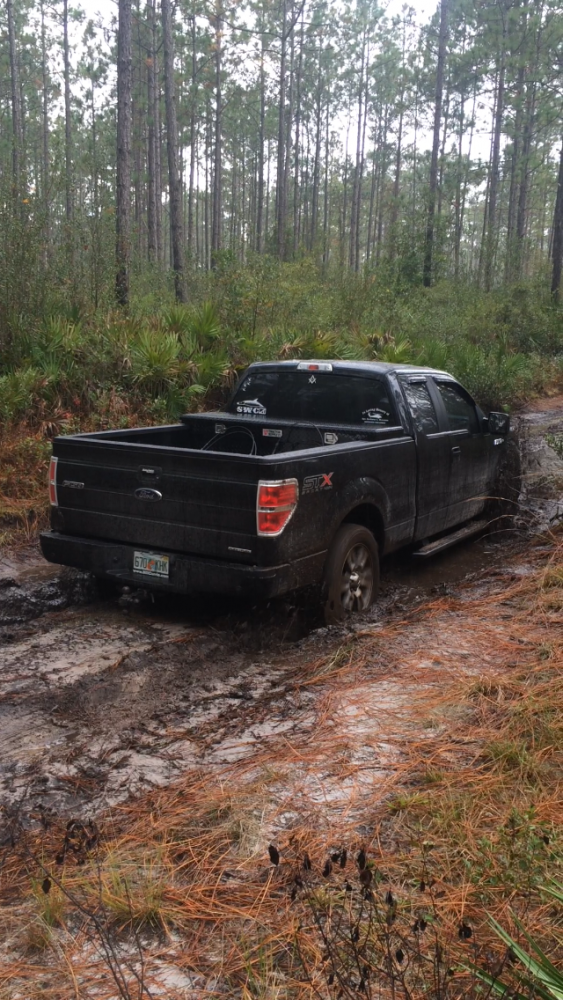 Finally Monday came, the day we’ve been waiting for… and the weather went straight to crap! It was warm and super windy with winds blowing 20-25mph and gusting up to 30, there was no way the deer were going to get up and move with it blowing like that. The first day came to an end and no one saw a thing. Tuesday came and the wind had settled down quite a bit so now there was hope. Sat in my climber Tuesday morning and saw several does and some turkey but not that buck, where we hunt bucks have to be 3 points on one side. Just after lunch time the rain began to pour down so we bailed from the stands and opted to do some scouting from the truck. We drove around checking out some old spots and watching roads from the truck. With it pouring rain still around 4pm my friend and I checked out one last spot that I took a liking to. For about 45 minutes in the heavy rain I scouted around in full camo and a my golf umbrella (must have been a sight)… Finally I found what I was looking for and marked a tree that looked good for the morning, marking a bright eye trail from my tree I made my way back to the truck.

Wednesday morning came and the rain was still pouring down and today was my last day to hunt before having to head home for Thanksgiving. After a mess getting in the gate I finally got to where I park my truck, the rain was still coming down and after the past 4 days I was pretty discouraged. Not wanting to climb the tree in the heavy rain, I sat in my truck in hopes that maybe something would cross the road. At about 7:10am the rain had let up to a drizzle and I decided to get my ass out to the tree. By 7:30 I was in the tree and settled down (only 2 and a half hours later than usual). The sun was already up and I had just about written the day off as a loss. The tree I had scouted the night before looked even better once I got in it and I had to admit it still held promise.

Around 8:15am Andy sent me a text saying they were seeing deer move and Kayla just shot a turkey. I texted him back at about 8:30 saying sweet and that I haven’t seen a damn thing but I was going to sit it out anyway. 8:40am and I see deer moving off in the distance, I look through my scope and see it’s a buck and confirm that its a shooter! The buck stops giving me a solid broadside shot at about 160 yards, I steady my breathing and squeeze one off! I look out of the scope and see about 5 other deer jumping in all directions and that buck was now turned around and walking back out the same way he came in. I look back in the scope and see he’s just standing there so I send another round down range and he takes 2 leaps and disappears out of sight. 8:45am I text Andy saying I just shot a buck, pretty sure I hit him twice…

I climb down out of my stand and head over to where I feel that I first shot him. Looking all around I see no blood, no hair, nothing. Andy calls me and asks what I see and I told him “not a damn thing” and that ill text him when I do. I looked back at the tree I was in and noticed that the tiny oak that I was shooting directly over was off-line from where I was. Keeping my eyes on that tiny oak I adjusted and walked till I was lined up with my tree, looked down and there was blood everywhere. Not 15 yards from where I was standing laid that buck, my 1st racked buck at that!!!

When Andy called me I told him it was a nice 6  possibly an 8 as far as I could tell through the scope, little did I know what I was about to walk up on… There he lay, the biggest buck I’ve seen in person with 2 shots 3″ apart in his shoulder. 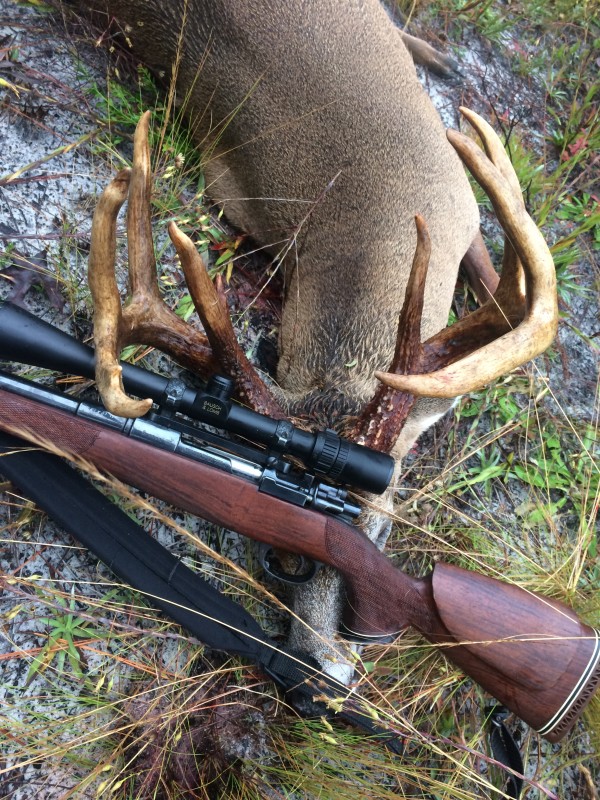 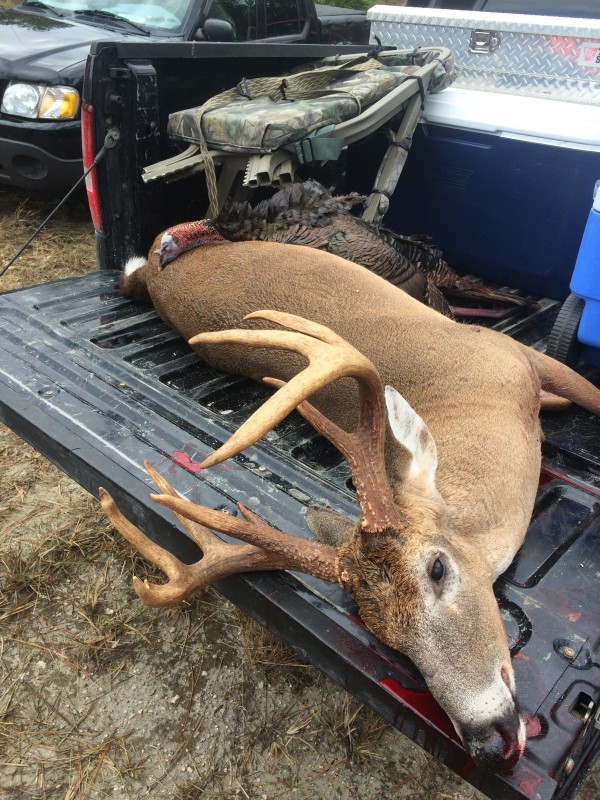 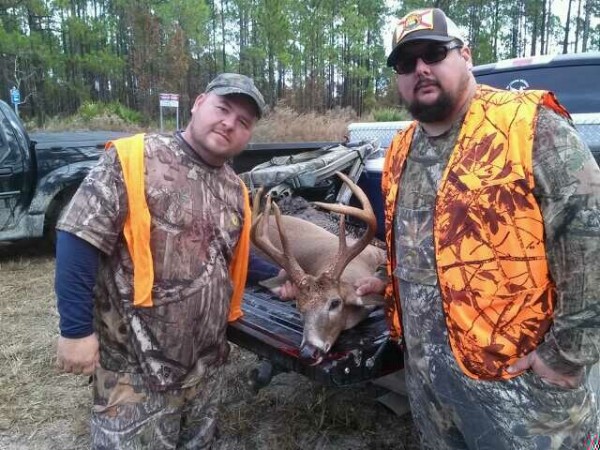 He was a 10pt and weighed 161lbs and measured 127 5/8″ (120 3/8″ officially) in the Florida Buck Registry. Last I checked he was the 4th biggest buck taken this year in Florida and the biggest on public land.

Good times and good memories that will last forever is what it’s all about, whether you’re in the woods or on the water.