Several of my trout fishing buddies have often told me about a special place in the desert of Nevada called Pyramid. I have heard stories of big foot, red-headed giants, water babies, a 50foot sea lady and cutthroat trout that grow to epic proportions. Oh yeah, it’s on an Indian reservation and it’s salty. When Jay Johnson and Jackson Killion invited my buddy Branden Jones and I out, we had no hesitation. This sounds like the kind of place I dig.


Meredith dropped Branden and I off at the airport in Tampa and told us to have fun but don’t go to jail on an Indian reservation. You would think she would know me better than that after 13 years. We got through security and stopped at the bar to quench our terrible thirst and toast to vacation. Then I realized that I had lost my folder already. We finished our beer and went back to security to see if I had left it there. The main security dude said we came through the middle line and he didn’t notice anything. I didn’t realize we stuck out that much. He called down to the check-in counter and they brought it up to me. 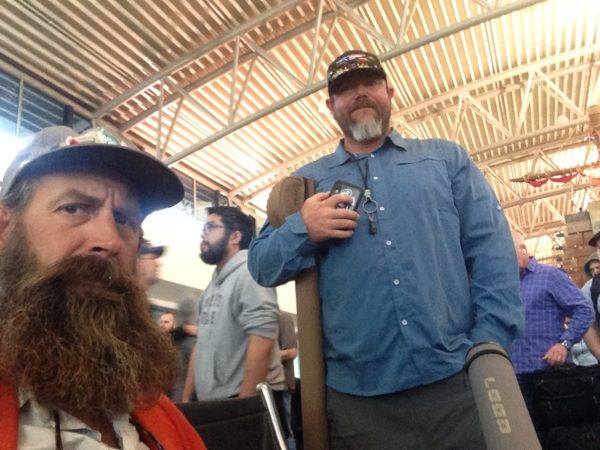 After a 4.75 hour flight, we landed in Phoenix and hustled to our next flight. We arrived in Reno and checked into our hotel room at midnight. We quickly caught an Uber and met most of the crew at the Chapel bar. By the time we got back to the room, Branden and I had been awake for almost 24 hours. A couple hours of sleep and we loaded in the Pig Farm Ink 4 wheel drive short bus. 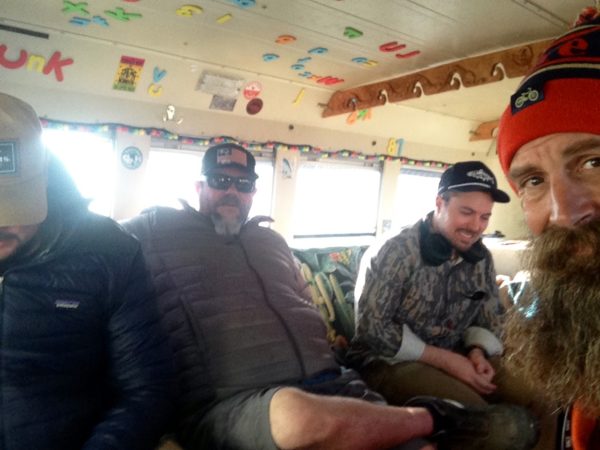 We hit a grocery and headed into the desert. About 45 minutes later we came over a ridge and got our first glimpse of the 35 mile long 10 mile wide salty lake. Freaking outstanding! The first stop was Crosby’s, which just happened to be the place my buddy, Derek Rust, told me to have a beer for him. This place is the epicenter of Pyramid Fly Co. It’s a convenient store, breakfast and lunch spot, fishing license dealer and bar with pool table. We grabbed some beverages and met the crew at the beach. Quickly we assembled our rods and surveyed the shore. Several people had teased me about my ability to deal with the cold after living in Florida the last 20 years. Those chuckles turned into fits of belly laughs as I pulled my waders over my offshore cold weather survival suit. In the long run, I handle heckling much better when I’m not shivering my ass off.


After a few hours of casting, the guy next to me asked me to net his 16-pound cutthroat. What in the world!! The sunset and we went up to Crosby’s for some beverages and to talk smack about the fish we were going to catch the next few days. 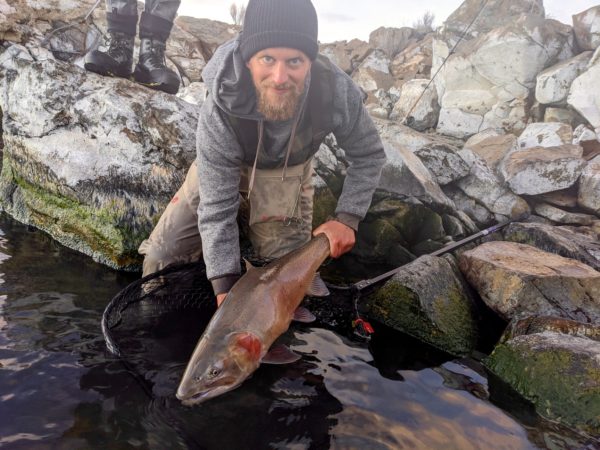 The next morning we woke just after dawn (slightly later than we planned). Branden got a suckerfish but I cast all day without a bite. The only thing that kept me going was the occasional yell from someone else in the crew as they hooked a cutthroat that would be a record in most other states. That night we had a Pig Farm Ink tying and karaoke event at Crosby’s. Jay, Nicky, and Nick Torres impressed the entire bar with their karaoke prowess. 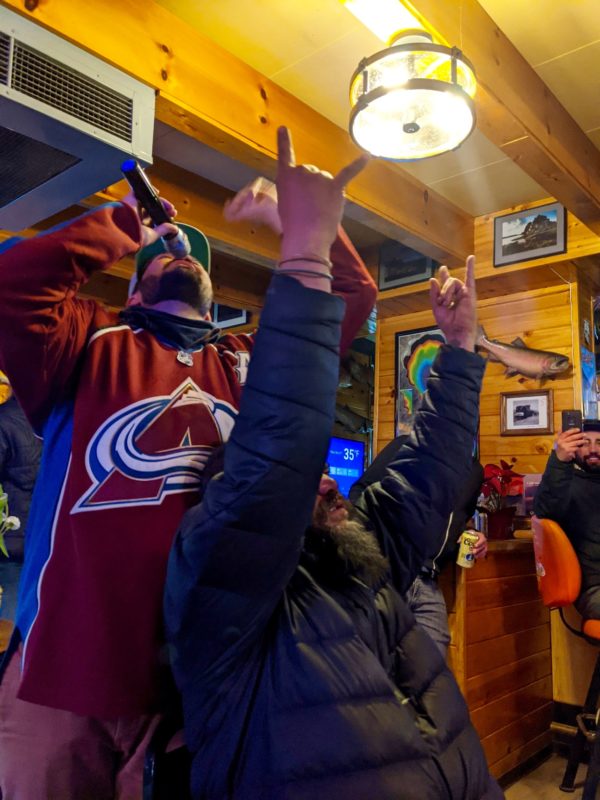 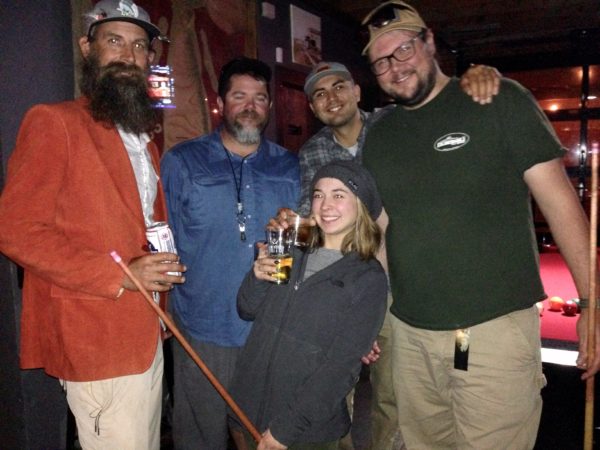 The next day was a similar deal with me casting my ass off with no results. Meanwhile, people on both sides of me hooked and landed fish. Finally, I got a bite. I pointed my rod at the fish and strip set his face off. The leader popped at last and I heard the guide, Casey, say “what the F was that”. The leader exploded and came flying back at me. Right as the sunset, I got another bite and instinctually set the hook the same way and got a straightened hook back. This time Morgan saw it and waded out to give me a gentle verbal lashing. We retired to Crosby’s with one last day ahead of us.


We got up pre-dawn because Casey had told us to meet early and he would put us on a “hot stand”. The fishery here is different than anything I have done before. We waded a little over waist-deep in the cold water and then climbed on to a ladder with a seat mounted on it. 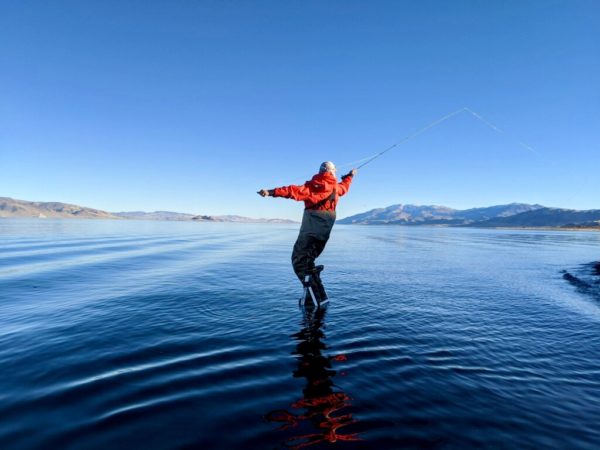 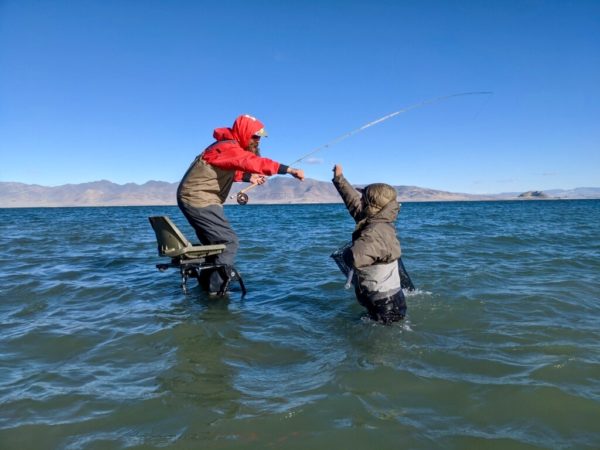 On my way to the stand, on my last day: I misstepped, lost my footing and landed down in the water in my waders. That’s it! I’ll be back next year to catch my first cutthroat on a fly. Drew drove me back to camp to dry off and to try to get my body temp back up.


I laid down on the couch in my sleeping bag when it hit me: If I am going to lie down and quit, I’m at least lying down where the fish party is. Drew drove me and my sleeping bag back down to the beach. 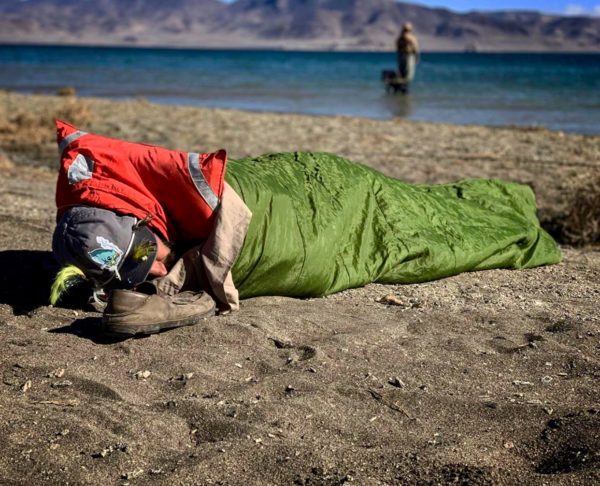 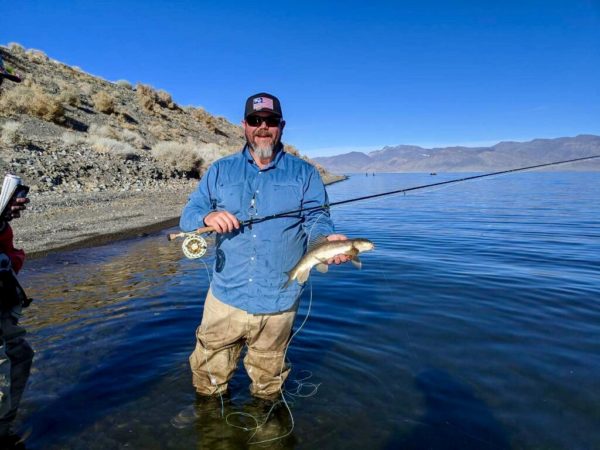 Two or three hours and several cameos in photographs later, I woke up to Branden landing a good fish. Morgan, Casey, and Jimmy walked over to tell me to put my big boy drawers on and get back on that ladder. Morgan handed me some dry waders and a single hand rod with a streamer fly. A few casts in and I went tight. Jimmy was right on time with the net to land my first cutthroat on fly! 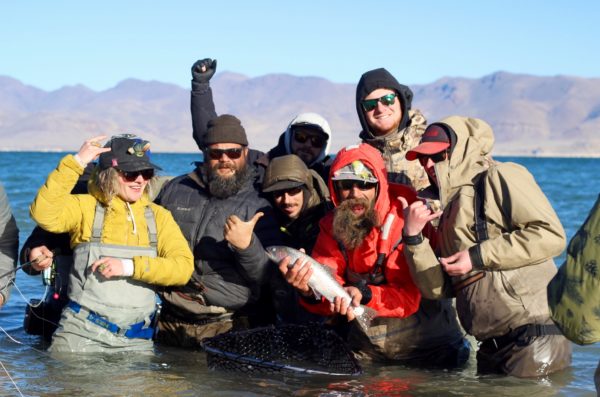 My first fish was nice and I was hooked and looking for a big one. A few more casts and I was tight again as fish rolled all around us. This time a larger fish. Jimmy on the spot again with the net. 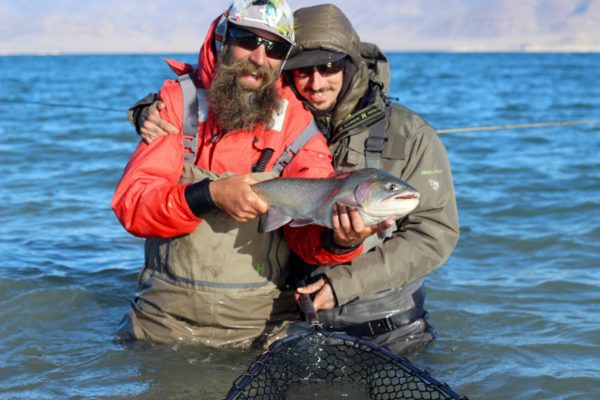 An obligatory swig off the bottle and my trip was a complete success. Crosby’s was right on time that night. We reminisced about the week with old friends that we got to hang with again and new friends we are looking forward to showing our Florida fishery to. We all realized just a little bit more how truly blessed we are. 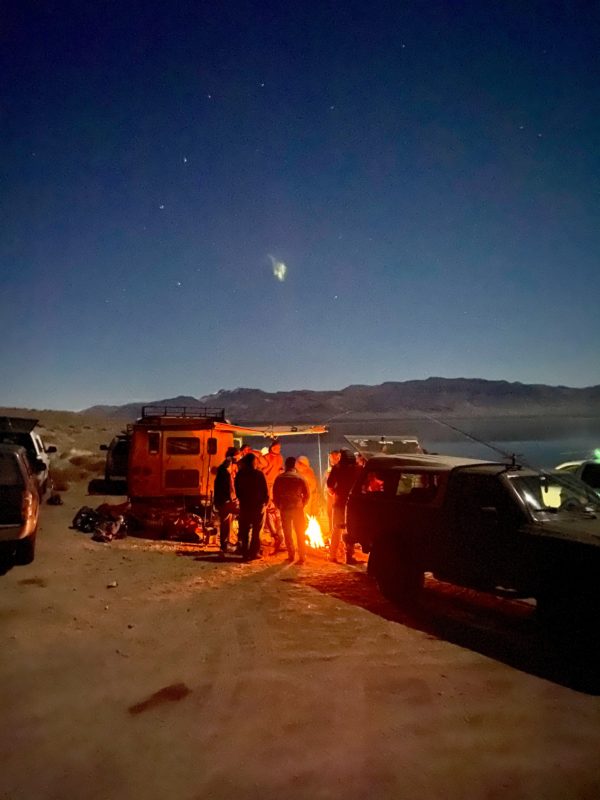