Started off the day at the Fly Fishing Show in Winston-Salem, NC, and ended up on the Watauga.

I was awakened early Saturday morning with anticipation of the day to come. My father and I were finally going to be able to attend the Fly Fishing Show. We arrived in Winston-Salem at 9:00 am and got in just as the doors were opening. We got our tickets and entered the show room. After walking through around 5 rows of vendors, and buying a few fly tying materials it was only 10:00 am. Then arose the question from my father, “Was that it?” and then the next question, “How far is it to the Watauga from here?” and I responded and said, “I don’t know, let’s go.”. So we did.

We arrived in the parking lot around 12:30, and we made the most of the afternoon. We both slid into our waders and boots, and rigged our rods. My dad tied on a size 8 Woolly Bugger with a silver Ice dubbing instead of Chenille. I attached a 12 foot 5X leader to my fly line with a loop to loop connection. To the end of that I tied on a size 16 Copper John with a little size 18 pink egg dropper. There was already people in the spots that we usually fish, so we moved on down the stream where we had never fished before. What we didn’t know was that the water, for about a 1/2 mile section below there is absolutely terrible. Despite that fact, we still decided to fish it. The one decent pool we came across produced 2 suckers, they both ate the egg. It is 2:00 before we encounter any worth wile water to fish. My dad was the first to it and he took first blood. A nice little rainbow trout, probably around 10 inches. I start fishing again after taking pictures, and not even 5 minutes later he is running back up the river with another solid fish! This time a 12 inch brook trout ate his fly.

We move down the river some and I finally hook a fish; another brook trout. This fish was about the same size as my fathers, but my fish had a small kype (what most people call a “Hook Jaw”). I release this fish, and what do you know, my dad is hooked up again! This time its a little brown trout. We continue to fish down the stream until we run into bait fisherman, and  both of us decide to start heading back since we had wondered quite a ways from the car.

As we walk along the river, we notice that our spots are open, so I hop in and change up my fly selection. I switch to a size 16 bead head brassie that has brown and gold wire for the body, an olive spectrablend dubbed thorax, and an orange hot spot just behind the bead (one of my own hand tied flies.). For my dropper I tie on some 6X tippet and my trusty size 20 Copper John/Pheasant Tail hybrid. I begin to fish upstream through the run. Within 5 minutes I have hooked and landed a respectable sized brown trout on my Brassie. Soon following that I add 2 more fish to the count on the size 20 CJ/PT hybrid. I move downstream to another good run. I hook and land a fish, and as I am releasing it, I notice something that looks somewhat like a gold bar moving left and right picking off nymphs in the slow current. It’s a Palomino Trout; this is the first one I have ever come across. I get some amazing drifts right past this fish, and after what was at least 30 minutes I start to lose faith in what I had on. It is nearing dark and I’m getting a little desperate. I tie on an Articulated Peanut Envy (Kelly Galloup Creation) and strip it across the run, right in front of this fish, and it doesn’t move an inch! I do the many more times only to have a decent size bow rise up and hit my fly like a ton of bricks.

In the end of the day I was unable to catch the Palomino, but I’m sure I will have another shot at him. Below are some photos from the Watauga, and a few from the next day at Twelve Mile Creek! 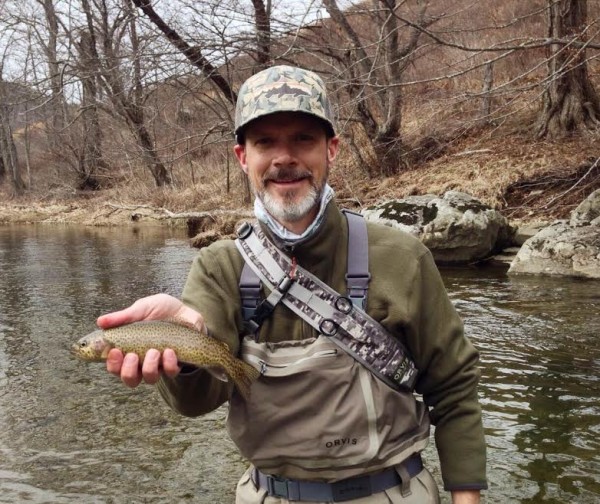 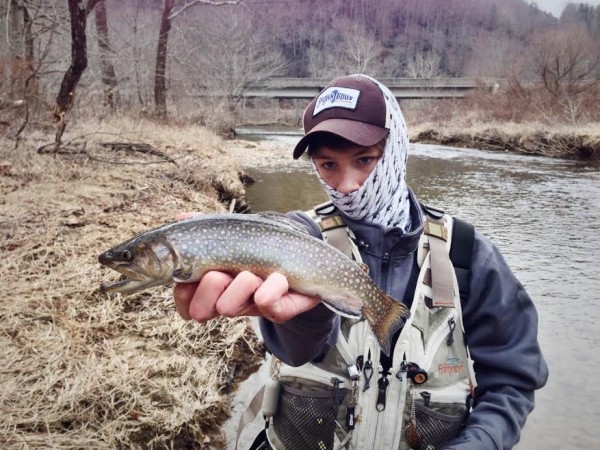 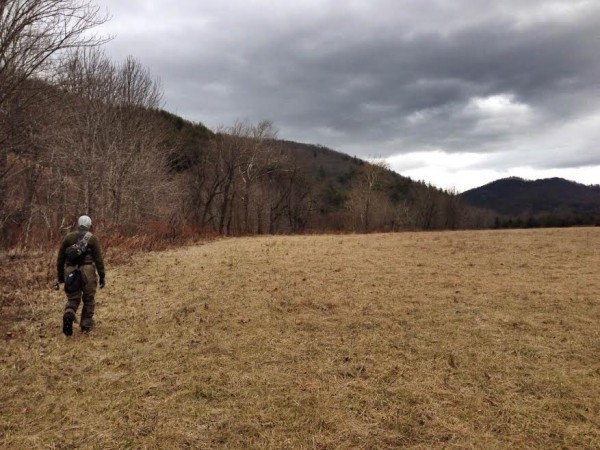 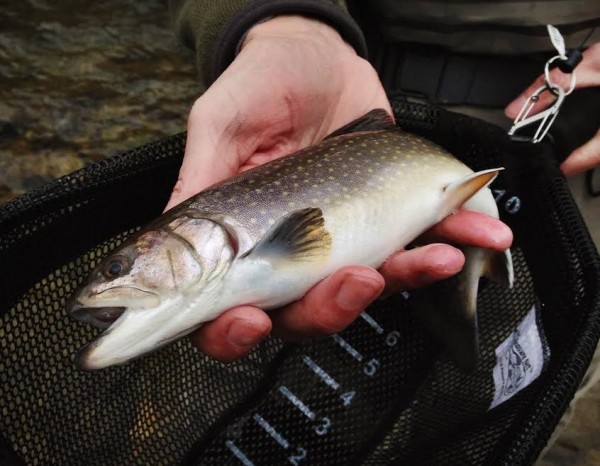 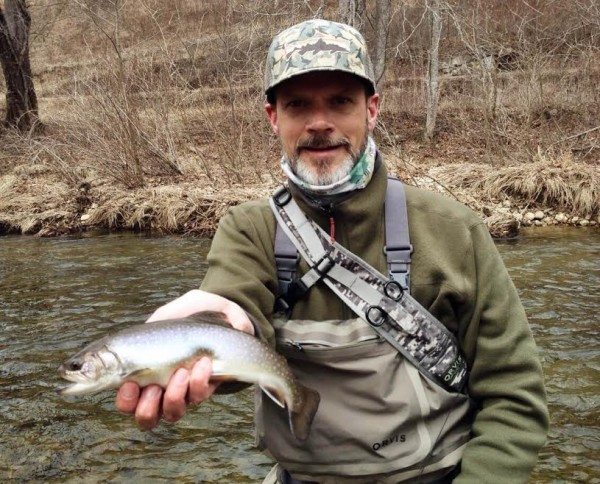 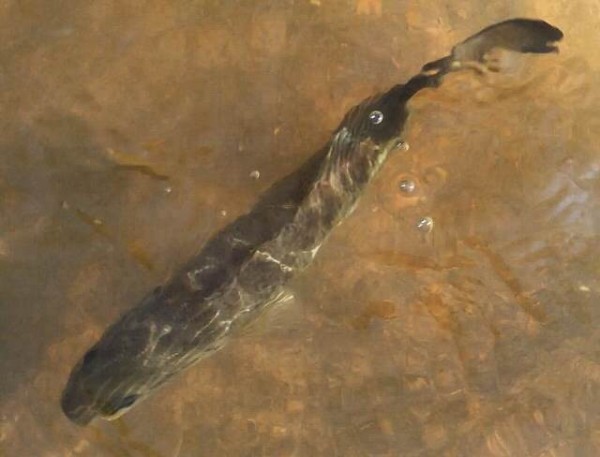 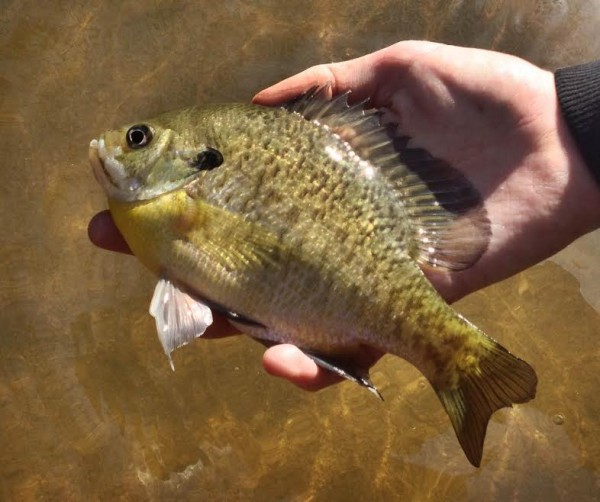 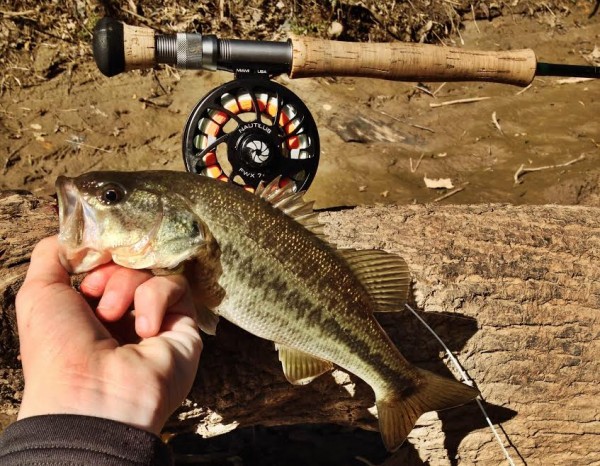 Nice bass on a Crawdad pattern!