Palomino’s on the Raven Fork 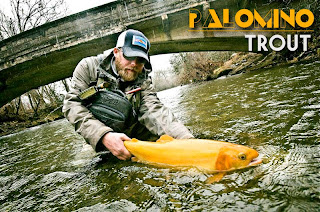 The other day I went up to the Raven Fork in Cherokee, NC with Louis Cahill. We always try to choose the nastiest days to hit the river up there to avoid the crowds, but despite the heavy rain, there was still quite a bit of angler traffic. Below are some photos of some palomino trout we landed that day.
Palomino Trout – Photo By: Louis Cahill
Generally we go out there and whale on the regular trout finding the flourescent palomino’s to be harder to catch. This day however, we ended up with more Sunkist in the net. We caught them nymphing, which is how this giant 8 pounder was landed above, but we really had better success throwing streamers.

Male Palomino Trout – Photo By: Louis Cahill
A slow swung streamer in front of the palomino’s face followed by a quick retrieve seemed to trigger a aggressive eat consistently throughout the day. The trout out at the Raven Fork aren’t the prettiest fish to swim in a trout stream, but they do offer anglers trout way above average in size, thanks to the Cherokee theory of “big fish attract more fishermen management approach”. If you have not checked this stream out yet, you should for sure. It’s a beautiful stream with no silt and fabulous round river rock along the bottom. I wish all of our streams looked like this. It’s like traveling back in time before all the development around all of our trout streams in the Southeast.
History of Palomino Rainbow Trout “Golden Trout”
The golden rainbow trout originated from a single rainbow trout that was spawned in the fall of 1954 in West Virginia. This trout’s body color was a chimera of golden and normally pigmented tissue. When this fish was crossed with a normally pigmented rainbow trout, the offspring (what we have come to refer to as palomino rainbow trout) were lighter in color.
Golden rainbow trout and palomino rainbow trout are not sterile hybrids, they are simply color variations of rainbow trout (Oncorhynchus mykiss) and should not be confused with the golden trout (Oncorhynchus aguabonita) native to a few drainages in California. It took selective breeding for several generations to result in the development of true breeding golden rainbow trout. Typically, these fish are more of a brilliant golden color than the palomino rainbow trout, which has a color phase intermediate between the golden and normally pigmented rainbow trout.

The time I have fished and observed palomino trout, I’ve come to the conclusion that something is a little off about them. They always seem to sit high up in the current when compared to your normal rainbow trout. That would mean they’re burning much more energy then they really need too. It also makes them much more vulnerable to predators like blue heron and very visible to anglers casting flies to them. That’s not very smart on their part. I don’t know if they prefer to sip midges and emergers, or if they just lack the instinct to find good trout habitat. Guess it really doesn’t matter as long as we’re catching them right Go out and get you one of these. It’s kinda cool to look at one of these guys up close.