January and february in Indiana is cold as a witches titty. The weather is very unpredictable. Some years we get no snow, and some years we get puked on. Lake effect snow and ice has been piling up this year shutting down roads and rivers but also giving me a chance to tie and regroup for the next day when the conditions are right. I look for weather systems that get the fish eager to eat. When we get a good south blow of warm air the creeks melt just enough to get the water moving, and murk it up just enough to unspook the fish.  By warm air I mean anything above 20 degrees. We had a great sunday funday a few weeks ago and since then have had a couple warm days to get out and get at some Pheeeeeesh!

A few weeks ago my buddies Michael Pugh and Matthew Smith came up from Lafayette Indiana in search of some chrome refreshment. i told them i would meet them at the spot around 6 am. I ended up having a long night so i made it to them around 10. Matthew had already spanked 3 fish and michael was kinda bummed about the big goose egg he was getting while watching Matthew do work. Strictly Swinging the tug is the drug and these guys drove a few hrs to get here so i thought leaving them to fish was the best idea. I cracked a Peoples Mound builder to sooth my hangover and watched them work the area for a few more hours. The bite was over and Matthew tired from wrangling steelies decided it was time to head back home. 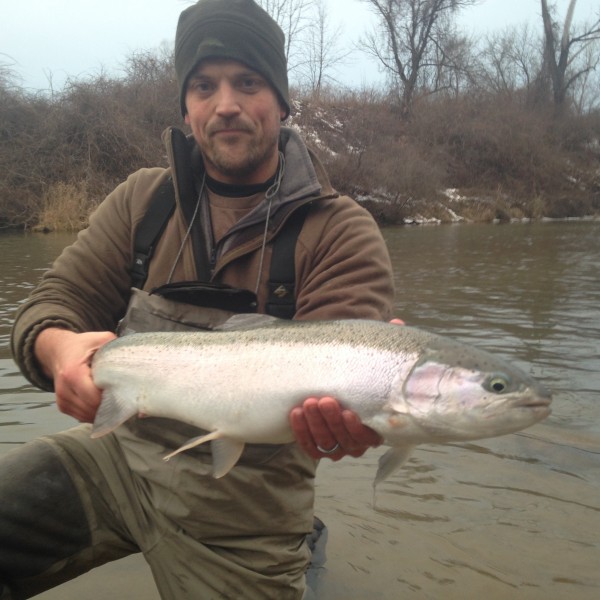 I even found a nice shed in the river while i sipped on a beer and watched the homies fish.  I am going to have David Van Wyk at http://www.bloodrootblades.com/ Make me a Kiritsuke/Gyoto Hybrid Chef’s Master sword with this as the handle, but thats for a different post 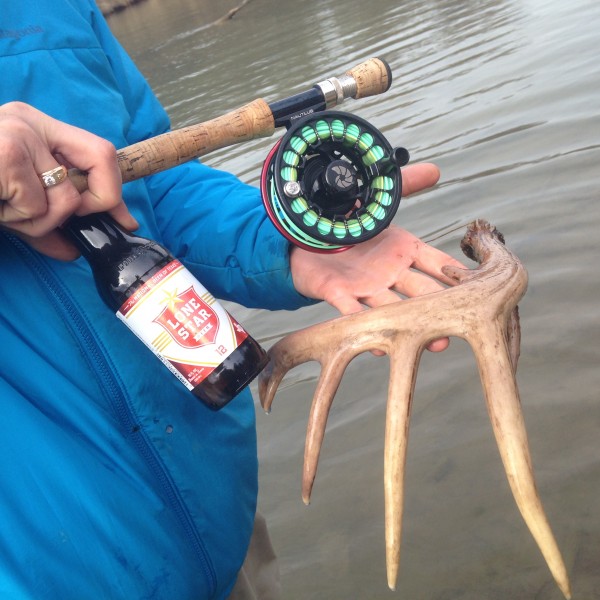 Michael on the other hand had a different game plan. He wanted a fish in his hands, Specifically a brown.  So we moved upstream to chase some fish that had moved up with the melt we had on a sunny 29 degree day. We worked countless bends and holes missing large browns around every corner. Michael eventually redeemed himself with  beautiful residential brown trout he caught while stripping a streamer out of a nice cut. 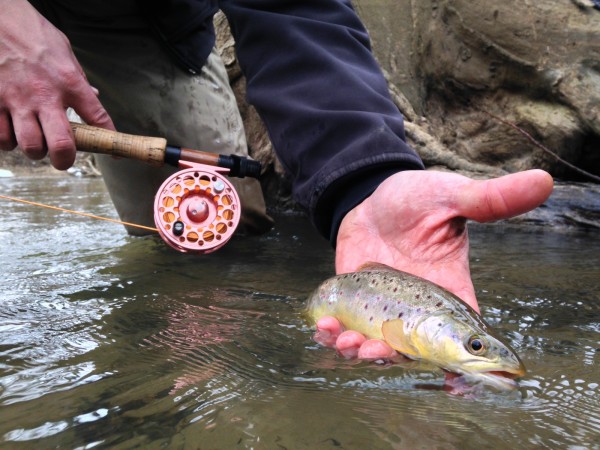 Here is a hole that was holding steelhead under a logjam. i jumped down in and vertically jigged one up out. The crazy battle ended with me pulling the fish back out of the jam and michael narrowly squeaking in a net job. Pretty awesome space for such a crazy fight. This fish literally ran insane circles around me and through my legs. I really am unsure how I got it done. 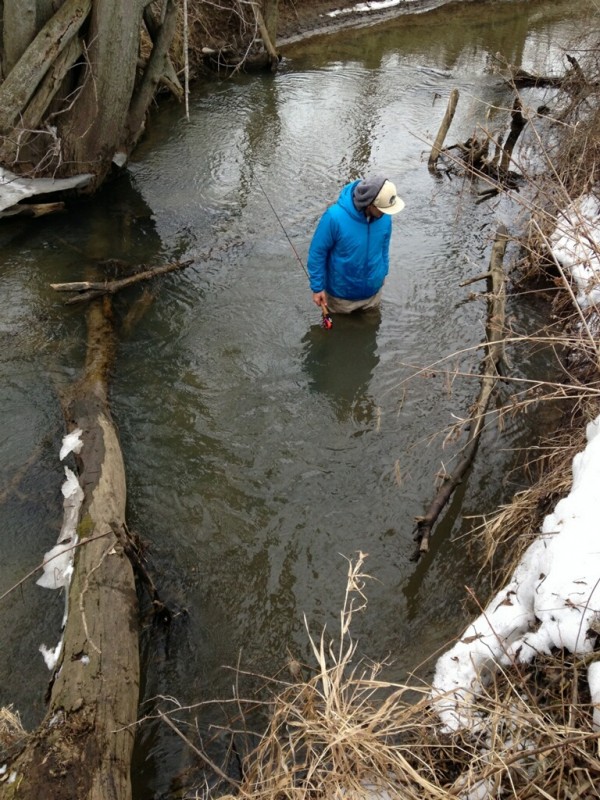 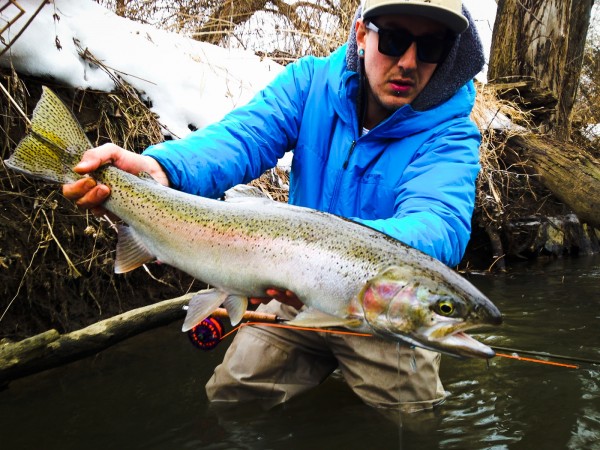 We walked some more creek and came upon a hole I knew would have a large brown in it. I have lost huge fish at my feet there before so I was super stoked michael was there to net if I needed him. I had been getting takes on my phoenix minnow pattern all day and michael had tied some up in olive and orange that where sick as hell so I tied one on and made a few casts. right off the bat I had a follow from about a 17 inch fish, then I had a good strike but a miss. I got my fly all the way up to the side of the eddy and let it sink. as I stripped out i had a huge rip and the weight of a large fish loaded up my 5 wt. At first i assumed massive steelie and was a little let down, but as the fight progressed and no acrobatics were had I started thinking otherwise. i yelled to michael I think I have a large brown and in the excitement michael grabbed the net took one step and slipped. Trying to catch himself he tripped and dove into the creek head first. Immediately he sprang up to tell me he was ok. Funny Shit. Granted im fighting the largest spring creek brown trout of my life and michael just dove in the water 5 feet from the fish. I am almost in tears laughing when michael gets to my side. I assure him its a huge brown and we get the first look at him. “Holy shit, it is a brown!” I screamed, and the beast shot upstream into the pool below the run I had hooked him in. There is a huge log in that hole and sure enough he wrapped me around a branch and shot back down stream. I slammed my rod down into the hole hoping not to break my rod tip on the branch to free my line. A little fandangling and I was free. I ran back down the creek to catch up to this guy. Sure enough he turned back upstream and did a few tiring laps. finally on one of his ways back downstream I told michael it was time and I was gonna raise him up. as soon as I did michael stuck him with a pro net job and we exchanged high fives and some hell yeahs! this hole was the last on our hike and had a great 2 mile walk back to the car super jazzed about such a great brown. The fish Measured 22 1/2 inches. I have been fishing for Large browns all over the great lakes and this wasnt the biggest I have caught but definitely the most gratifying coming out of my home water. 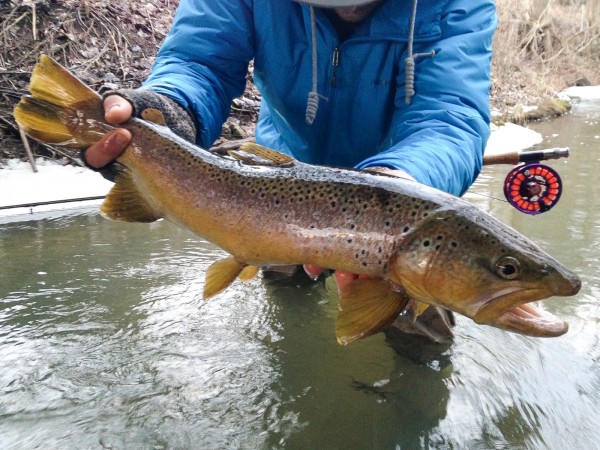 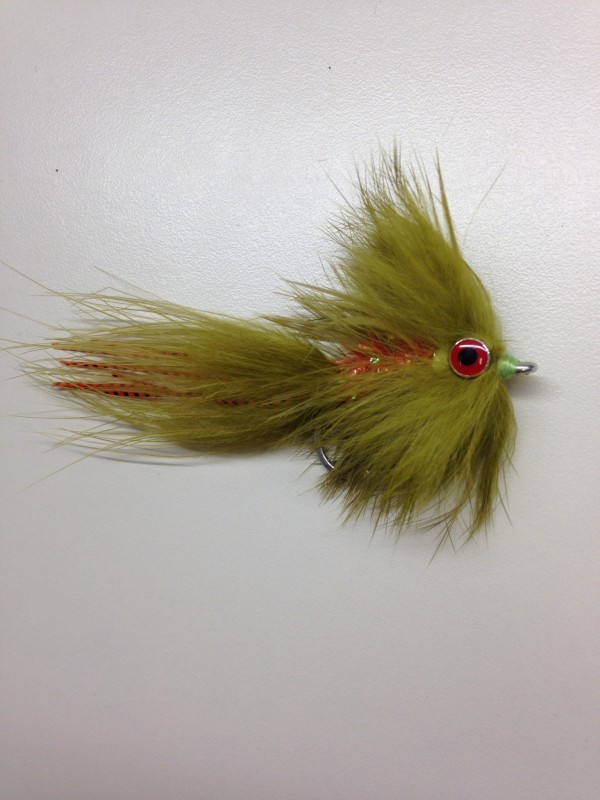 The following week the creek was fully encased in ice, and a slight warm up got the water levels to rise and open some runs up to fishing. My sous chef and I decided to go out and fish some new land I had acquired permission to fish. just happens one of my old servers lives on a private run of  a spring creek. Score! So we went to fish that land. I scoped it out the day before. The water was up maybe 2 inches and was a little murky that day. I had a few follows and a few spits from large browns so I was super excited to go back and catch the fish that had evaded me. Right out of the car I jumped into a spot and hooked up with a flying submarine. Small creek fishing in Indiana is a blast. These huge lake run Rainbow Trout get up into these spring feeders and are crazy hot outa the gate. I was stripping a white phoenix minnow and up outs the darkness came a chrome giant and it inhaled my fly.some intense moments followed by aired out triple flips bent my 5 wt. in half. With the fish tired out I jumped 10 feet down to the icy creek and tailed her, CPR and she was released back to the wild. Tom has a Nokia phone with like a 40 plus mega pixel camera so he snapped a pretty dope pic of the fish. the rest of the creek was very unproductive. in one day the creek had cleared up and the fish were on full spook.  No browns anywhere which is the craziest thing. some days they are there and like a light switch the next day they disappear. It goes to show how finicky these trout can be. 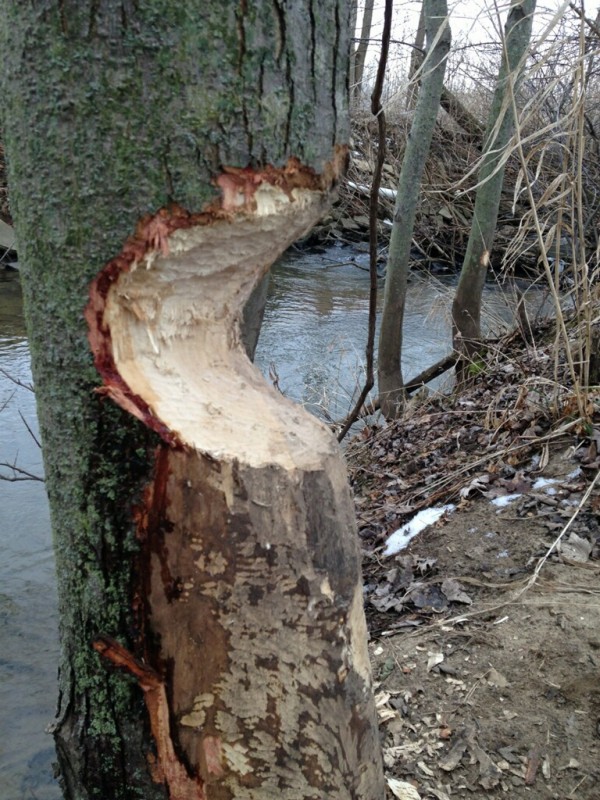 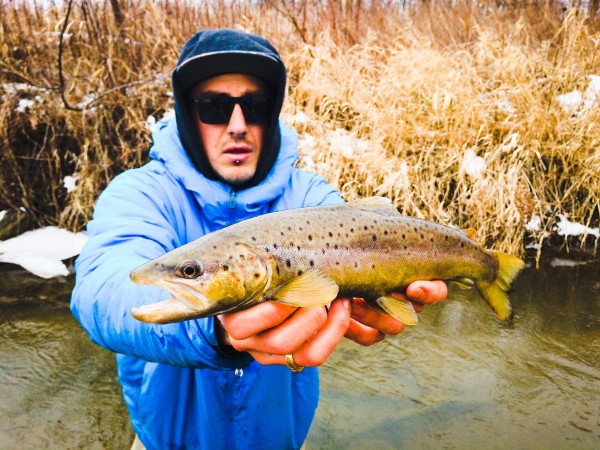 Every week we’ve had 1 or 2 warmer days that cooperate with fishing. My homie Tony Hart who also works at the bistro and has been my fishing buddy since childhood wanted to get on some of these big browns I kept telling him about. We have gone before and he frequents the spots ive shown him but had only got a few 16 inchers. so we worked about a 2 mile section. out of a tube running under a road first stop i pulled out a 19 inch brown. a good sign and i think it got Tony’s adrenaline pumping for the hike. we walked the beat of water and had some great chances at nice fish blind casting into holes and runs.  one bend i think tony had 6 takes on one fly and when he showed me what he was using I immediately knew why. Small hook gaps equal spit flies when fishing streamers for these big browns. As these guys get bigger their mouth gets tougher and they grow ever smarter in the art of SPIT. I gave him a few flies with a wide gap and we moved on. Nothing was really happening until we got to the last hole of our day.  I told him where I thought the fish was hiding and he made a perfect cast next to a boulder the fish was under. immediately he hooked up and I grabbed the net. A quick battle out of the wood and I slipped the net under his 20 inch brown. Upon further inspection of the gill plate we verified it was in fact the same fish I had caught earlier in the week. Another reason to only display catch and release practices in the small spring creeks. 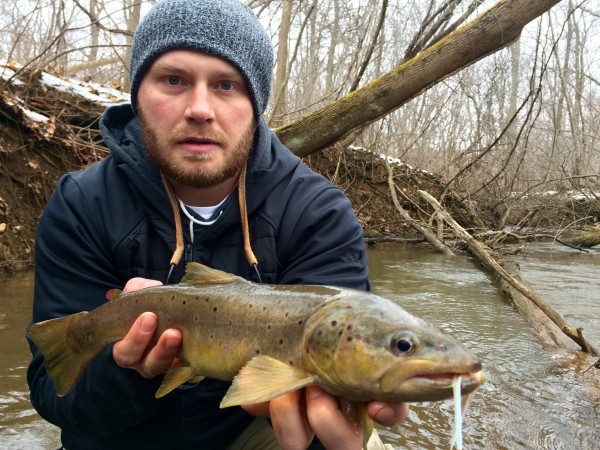 These fish are like our pets. We love them and display the utmost respect for them. a 20 inch fish in our system takes many years to grown to that size. These large fish are the brood stock for our entire river system.   I am currently trying to work with the right people to get some regulations changed in my area to protect these beautiful resources before it’s too late. The wrong people can in fact ruin a small fishery like this one. Dont let that person be you.  I believe the best way to success in this is education.  This hidden gem will stay hidden but also the meat hunters depleting the area still go unseen.  I hope to get this area turned into a catch and release artificial lure only area.  I hope Indiana DNR sees and reads this. I am under the impression the state doesn’t believe these reproducing populations exist.  Anyone also serious about this feel free to email me Scot_hinkel@hotmail.com Let’s Make a change!