It’s Been several weeks since our trip and memories seem to flow through my dreams like the tides we found ourselves in the hours before we set off on our second leg. The truck was loaded and the wind was calming my unsteady stomach. Minutes later we found ourselves parked outside of the Hells Bay canoe trail. I’ve never seen a trail like this and I doubt I will until I’m 360 miles south of the place I call home. There was a nice canopy of mangroves and other mixed scrubs. The sign had made this venture sound too easy to be true until I read “old timers describe this place as; hell to get into and hell to get out of”. I like challenges and I seemed to find comfort in the unknown of this place. We quickly unloaded everything and set off into the relentless twist, turns, and series of switch backs that made the road to Mordor seem like a joke. 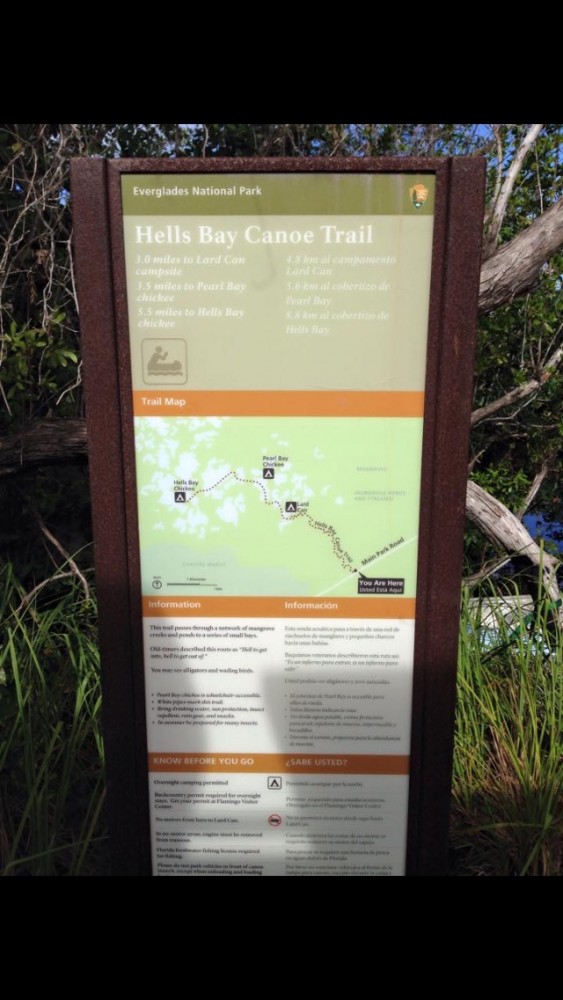 The water was clear and chilly, with the occasional company of small bass here and there darting in and out of the mangrove roots that had seemed to have planted themselves in all the worst places. Armed with only paddles and the ever longing want for the slightest breeze we had found serenity. It was calm, peaceful and even quieter than the first time you let the “f” bomb drop in front of your parents. I had wondered what my partner was thinking but I already knew cause his hat was whipping around his head almost as if he had passed gas. unfortunately he hadn’t, A battle ensued we both had left our day-to-day troubles behind us in that truck we had parked back some 30 min. ago. 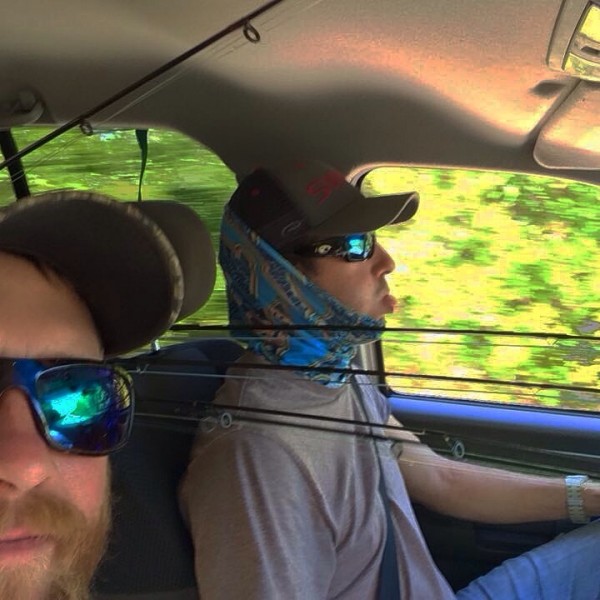 No complaints of work, No thoughts of the bills that never cease to pour into our mailboxes, Nothing from the world we had left behind. The horse flies wanted a war… and  war they had. I seem to have recalled a sign in the rangers office that said a $5000.00 fine would be presented to anyone found disturbing nature but these guys had it coming. After about $45k in “fines” later we had realized there were markers and at first they seemed to lead the way with the numbers counting upwards and sometimes not counting at all. Eventually we heard the sound of another person, sure enough coming around the bend was a kayak with a generous gentleman inside.  With his partner trialing slightly behind him he had asked our destination and replied that we had about another two and a half hours left till we reached our destination. At this point I had asked my buddy if that guy was just crazy or was this much bigger task than we had imagined.

Had we underestimated this trail entirely ? at this point it was about 2:20 pm and we almost began to worry that we would be navigating in the dark again we picked up the pace with what seemed like a race on Mario kart eventually turn left became Sharp right and before long we found some more people kayaking they passed with a couple of kind words and we continued. At last we had made it out of what id like to call the trail of death (lets just say the bass were happy with all the horse flies we left behind). We had made our way into a large opening where we noticed some signs that read “lard can” we paused to reflect on our journey thus far and to eat some snacks. Feeding some of the small Bass under the docks crumbs of our snack bars I had felt somewhat disappointed. Where were these monster Snook ? where were the tarpon and other trophy’s of the Everglades ? I continued on in a somewhat somber state of mind. How was it I was surrounded by all this beauty and in such a negative state of mind ? I had let my biggest enemy take the upper hand (myself) I stepped back and thought about this amazing trip I was on and remembered it’s about the small things in life I choose to carry with me. 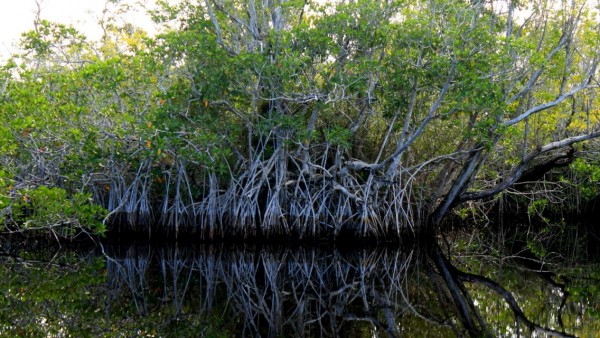 It’s not the hero shot that makes a person who they are, it’s the little gems inside of each of us that makes us who we are in the end and what we appreciate. If you go in search of personal best’s every time your out your more than likely to be disappointed and negative more often than not. This place is huge and we haven’t even scuffed the surface. 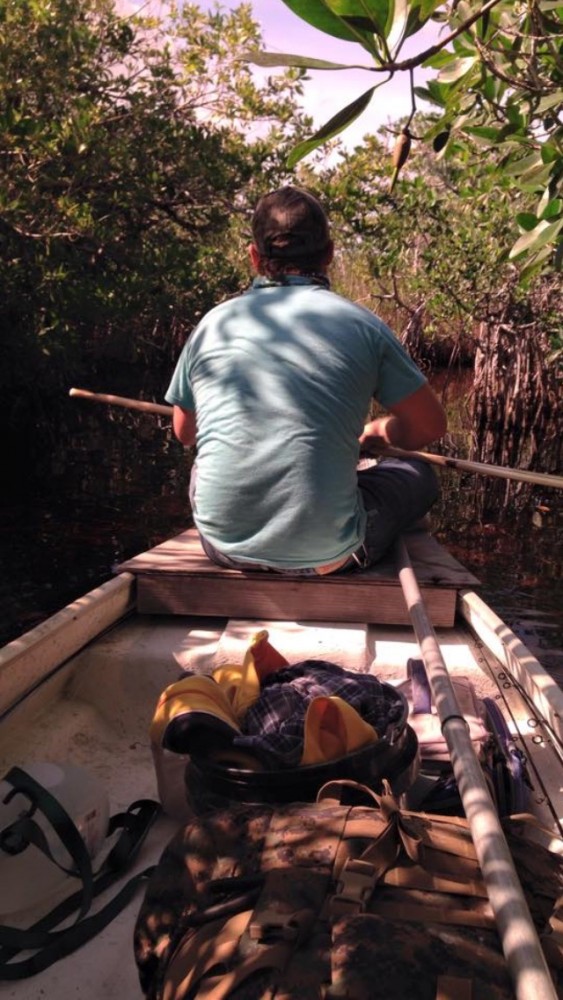 With our chickee in sight we switched to our cheerful and grateful laughter that we were both in search for the past five minutes. When we approached we were greeted by three adult males and two females whom all of which were extremely nice people we chatted for a few and set to preparing our camp. The wind had died off and left us with an absolutely gorgeous sunset. 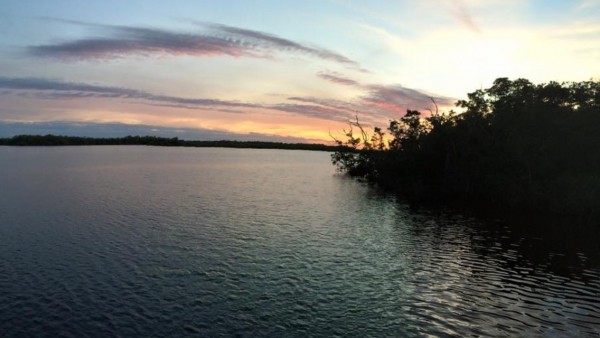 I prepared our last supper for the glades and as the aroma of grilled Caribbean Jerk pork chops, chili and hot and spicy peanuts filled the evening air we watched the stars and satellite’s put on encore. Shortly after 10pm some clouds moved in and tucked me into my sleeping bag. Morning came early and with the sound of Jacks crashing the nearby Baitfish we set off to wet a line minutes later James came tight and fought a jack from the mangroves near-by. With the release he was on and moving to his next meal. We searched for a while with me on the bow but nothing. a couple of sharks spooked off in the deeper water and an one otter later we broke camp and headed back to the truck. James’s Grandmother had been waiting for his presence for her birthday party and we knew Monday was just a couple of hours out. I’ll leave you with this, I’m not old when compared to the elders that once made these trips long before the luxury of technology. However I cant help but think without their wisdom and sacrifice these places might have never engraved themselves within my childhood memories and leave me wanting more. Always remember the little things and embrace all things good or bad cause in these moments we find what makes us who we are. 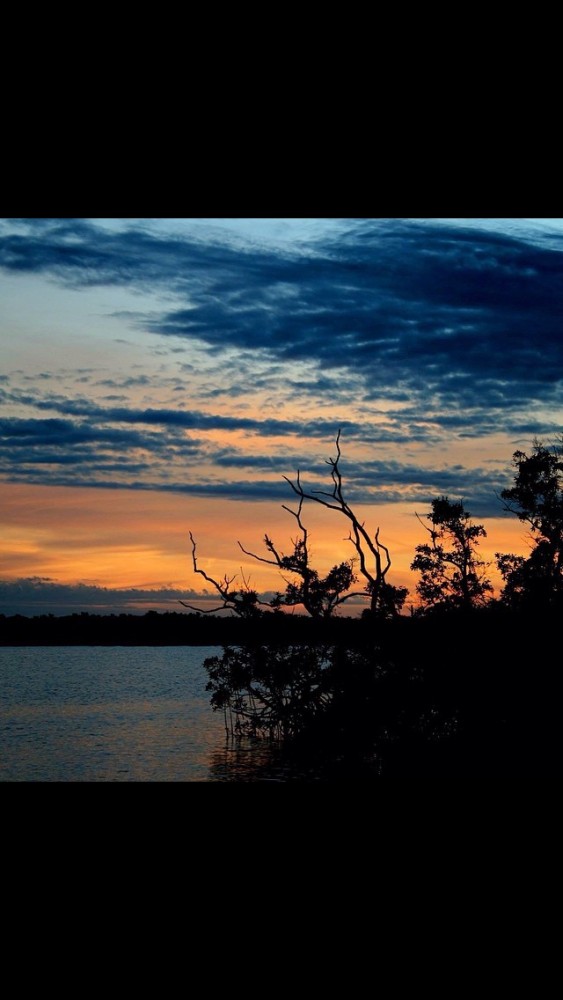 “The most difficult thing is the decision to act. The rest is merely tenacity. The fears are paper tigers. You can do anything you decide to do. You can act to change and control your life and the procedure. the process is its own reward.” -Amelia Earhart

“Adventure is worthwhile in itself.” – Amelia Earhart 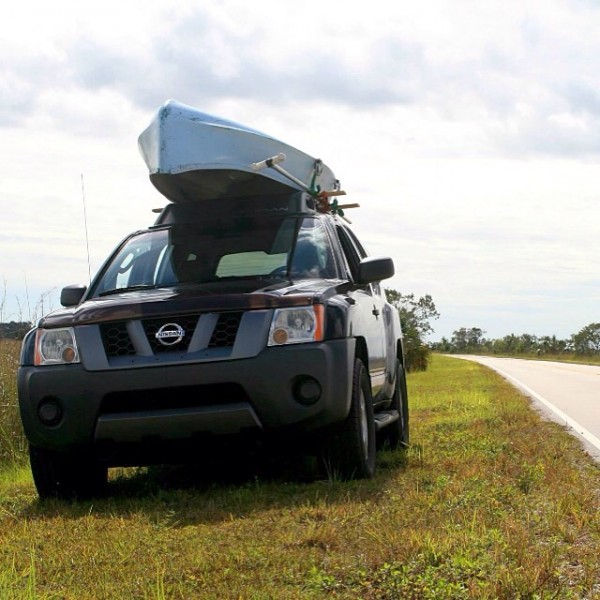