Labor Day Weekend in the Keys!

Let me start by saying that I haven’t fished once this past month. I finally had a break from work and Djing this weekend. The weather was was looking great there was no way I was gonna pass up this opportunity. Couple of weeks before I got a call from Jose Chavez to go fish in the keys during this weekend. I had plans to fish one day in the keys and come back to Miami and fish offshore the next day. My friend Jason a.k.a PK, told me he was staying with his Family in the Keys in their RV park. I ask him if he wanted to fish with us because his parents weren’t getting there until late saturday. 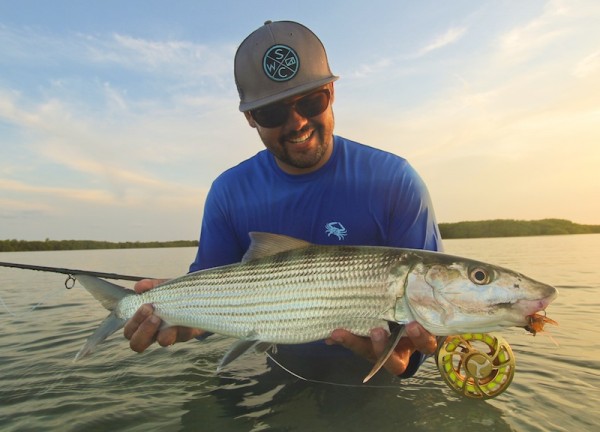 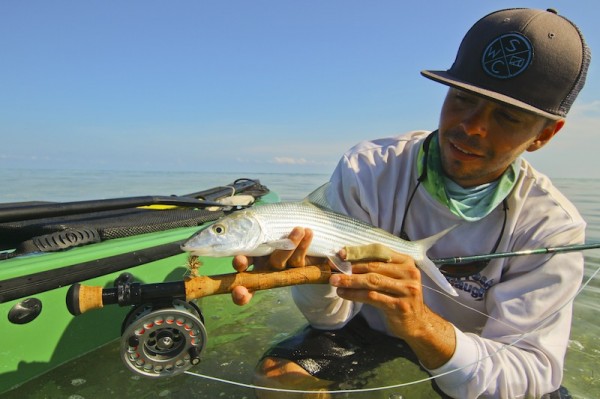 It was Friday night and I had to Dj at the Flat in Miami Beach. I figured I get all my stuff ready and drive down to the keys after Im done Djing.

After I got done, I picked up a case of energy drinks and made the solo drive to the keys. I hadn’t sleep since wednesday night and didn’t plan on sleeping until late saturday night. It was early saturday morning, I pulled up to the side of the road to do some fishing. It was flat calm so I gave it an hour but nothing. Around 10 am we decided it was time to go pick up Jose Chavez and his buddies to fish again. On the way I finally saw a deer on the side of the road. 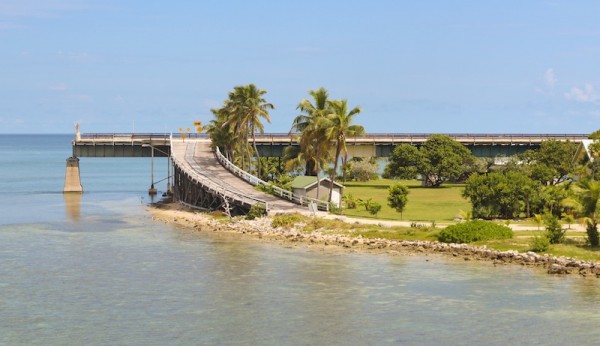 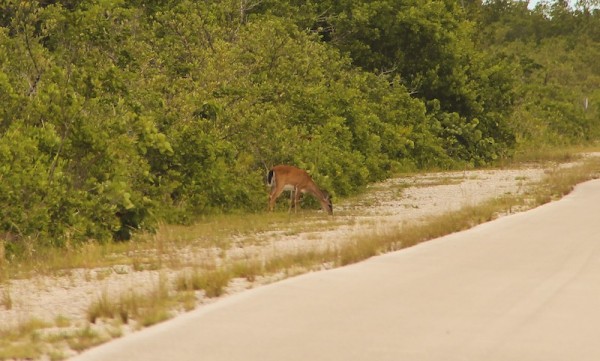 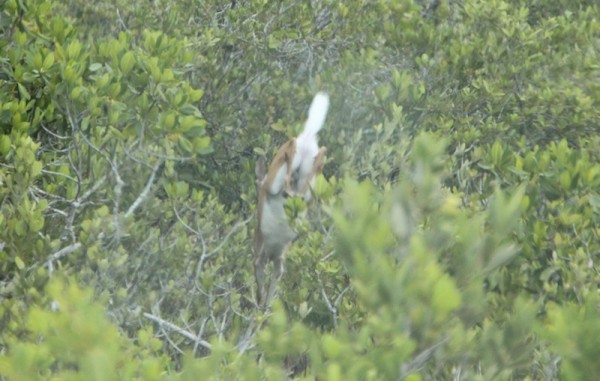 We drove down to pick up Jose and his buddies Ivan and Nick. Ivan was gonna join us on the kayak and Nick went fishing on the boat and was suppose to meet us later on in the day. Once we got on the water the weather started to look bad immediately. Pk had split up from the group and was behind that island after releasing a redfish that was in a school of 50 fish. He was too far and didn’t hear him so we didn’t get a pic. A huge storm was forming and rain was coming down. Pk and Nick stayed behind that island, moments later this water spout started to form. I start yelling at the top of my lungs because I didn’t see them trying to escape this spout. It got worse and worse. Pk and Nick told us they didn’t have a clue that the water spout was only 100 feet away from them. The quickly headed to where we were at. 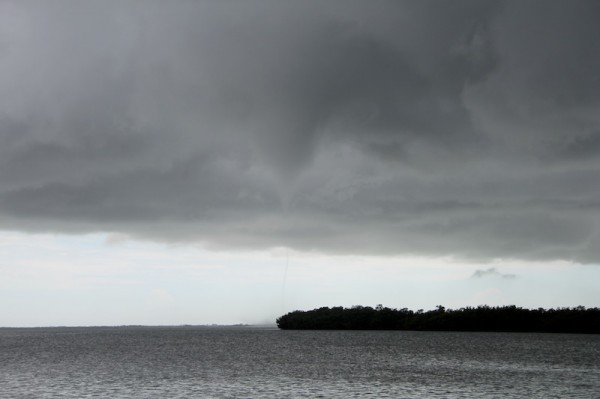 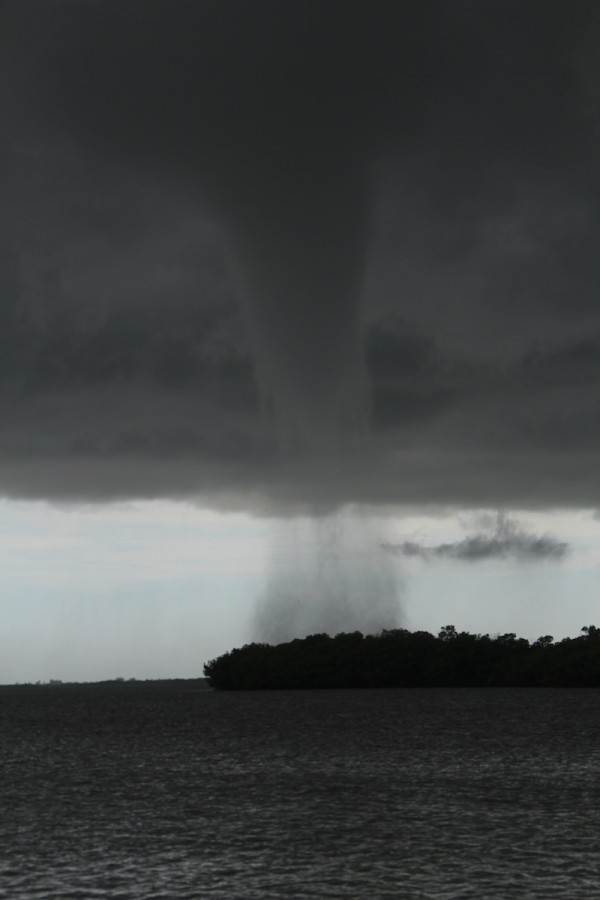 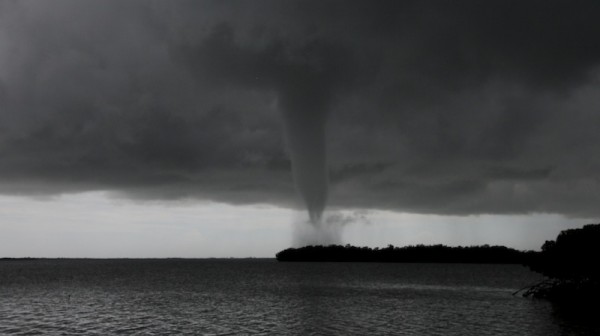 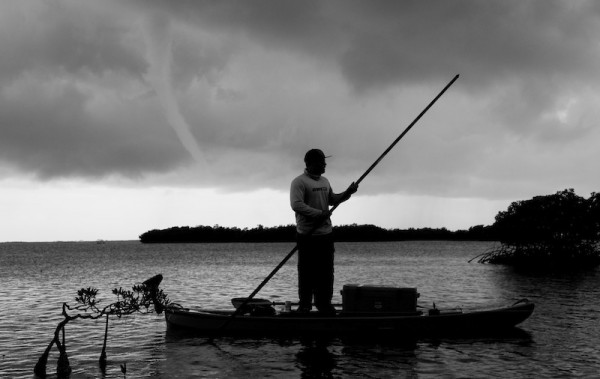 WHY NOT????? Nothing better than drinking beer underneath the mangroves, while waiting for the storms to pass. 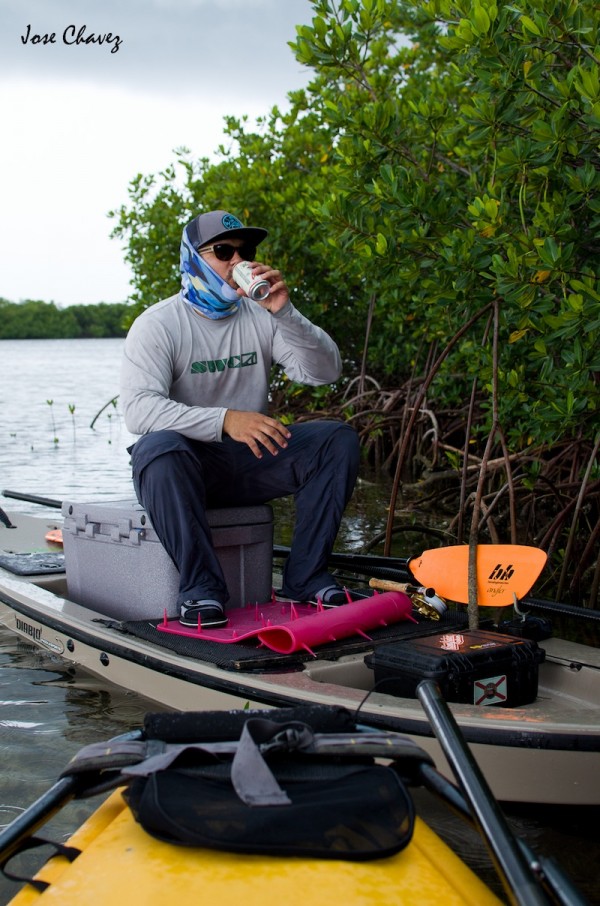 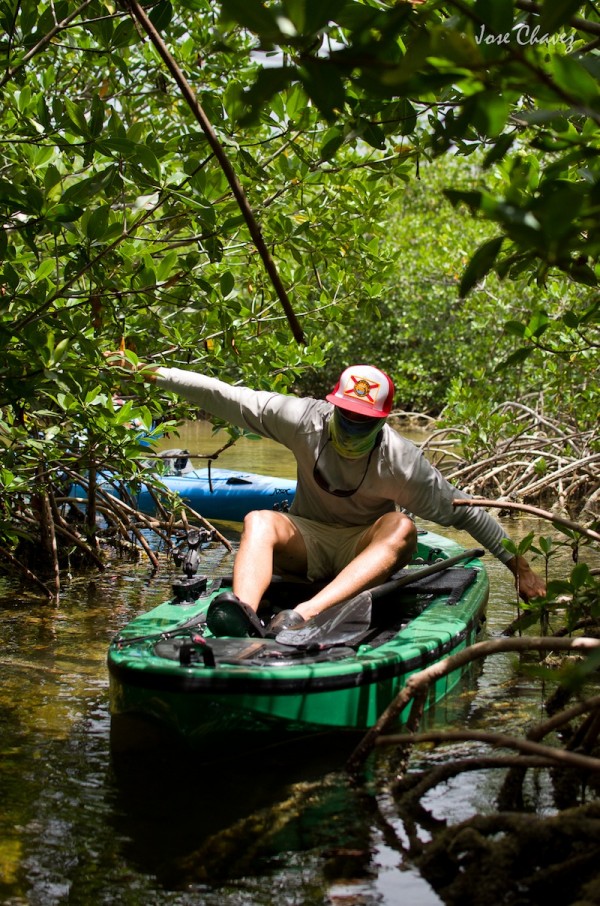 Finally storm passed us we looked for fish the entire afternoon but nothing. Jose spooked one bone and so did I. Everything else was cudas and sharks. Here are some random pics thru out the day. We Looked thru some promising looking areas but luck wasn’t on our side. 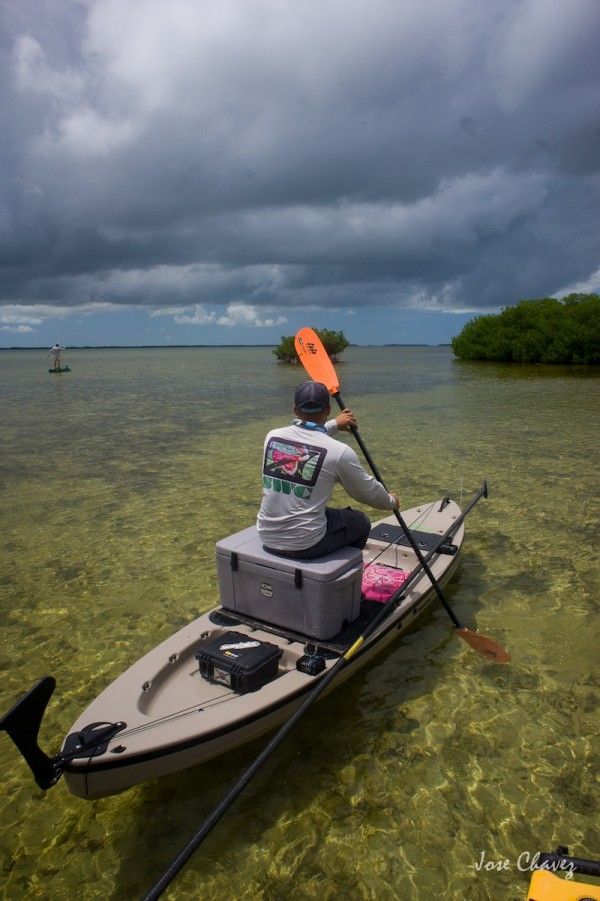 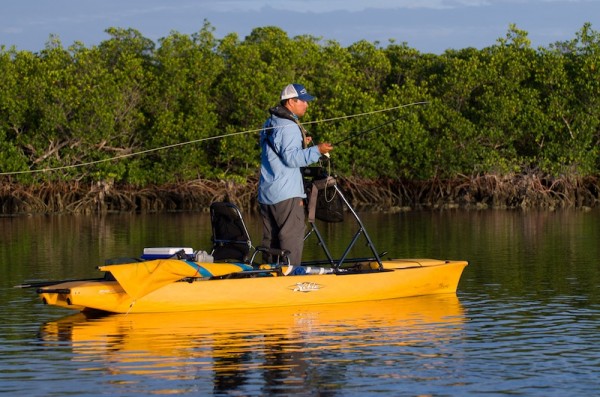 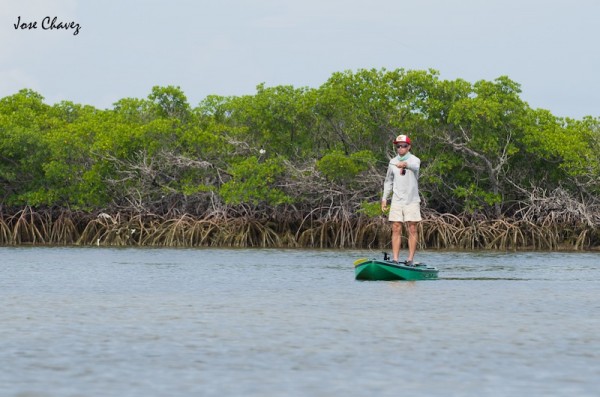 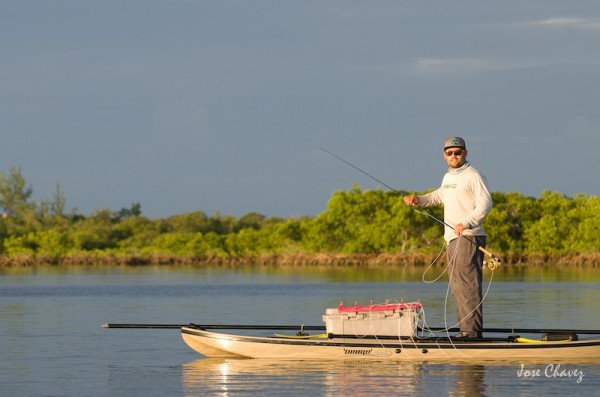 We fished into the late afternoon with luck except that one redfish PK had caught. One our way back we found hundreds of lobsters, even thought they were all small, Jose caught one that was in size. 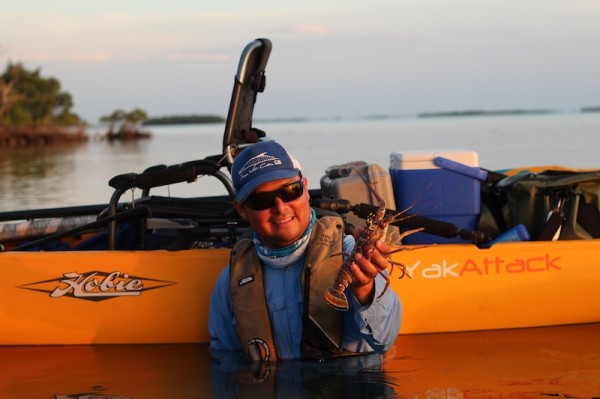 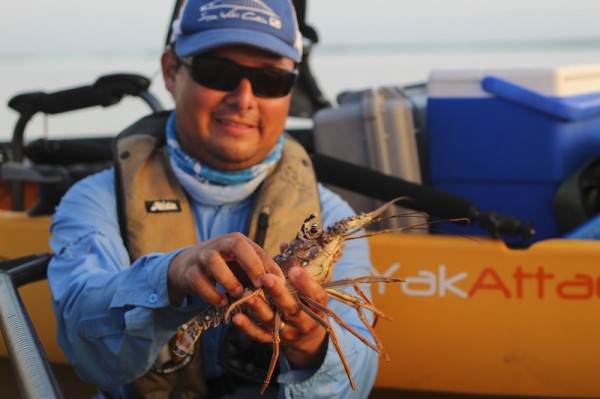 One redfish, One lobster, that’s what they day consisted of. I needed some sleep so it was time to get out of the water. We dropped off Jose and Ivan, and drove back to the RV park to meet up with PK’s parents. We got back to some great cooking by PK’s mom, Liz. She is such a great cook. Every time I am around, all the meals she prepares are mouth watering. Im not sure if I was more excited to get some rest or just pigging out. I ate, I showered, I finally got some sleep since Wednesday!!!!

We got up super late on day 2. We didn’t even feel like fishing. Liz made some badass breakfast we got so full, we knew it was time to relax. Pk’s Dad, Jesus, told us to go to the sandbar and chill for a couple of hours. Everyone got their stuff and off we went!! Some of their relatives came over and joined the party!! 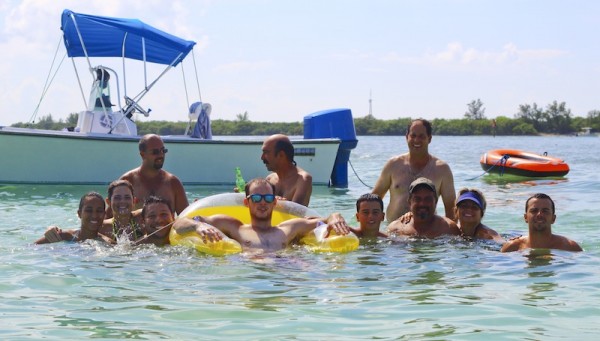 After soaking in the sun for a while PK told me we should go and give fishing a try. Jesus dropped us off on the boat so we can go and load up the kayaks and see if maybe we can catch something in the afternoon. He went to buy some lobsters for tonight’s dinner. Around 2 pm we finally got on the water.

We searched a lot of water and nothing to be found. We had seen some sharks, rays, and the occasional cuda that would fool you for a bonefish. so we poled and poled and nothing. As I was paddling, I saw Pk in the distance, I prayed to God that very second so that Pk could at least get a shot at a bonefish. 3 Minutes go by and all I hear was PK screaming at the top of his lungs, saying he hooked up to a bonefish, my prayers were answered. I quickly took out the camera and paddled to were he was. Pk is still a rookie fly fishing but he is great at it. I’ve had the chance to witness Pk’s first Tarpon, Redfish, Snook, and now, first Bonefish on Fly!!!!!!!!!!!

I think I was more excited for him, I was screaming and hugging PK once he released his bonefish. It was such an awesome moment. At this point, things were looking up, we had high hopes. We did more searching and struck gold as I landed this beautiful bone. He was tailing put the fly exactly in the zone. This bone did not hesitate to eat the fly. High fives all around!!!!!!!

We figured it was time to head back. We had a long ass paddle back. As we started making our way back I can see another tail in the skinny. I followed it for a bit until I had a chance to cast. Once again my cast was on point and was rewarded with the night time tailing Redfish. This redfish hit the cooler. Jesus wanted to eat some redfish because he has never tried it before. 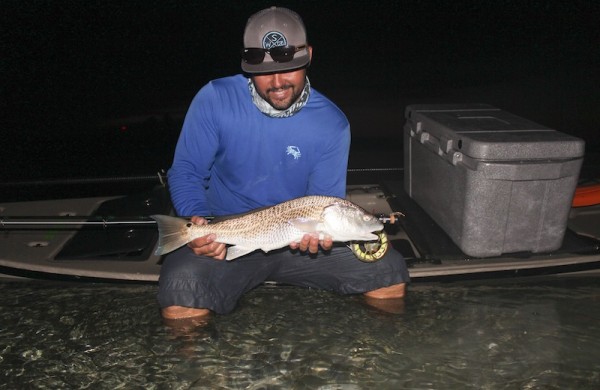 Back at the Rv, Liz had a phenomenal meal prepared for the family. She made Lobster Bisque, Lobster Paella, Steak, Chicken and bunch of other stuff. Lets just say eating dinner felt better than catching that bonefish. All the relatives came over and had a great time. We ate like monsters and drank like monsters that night!!!! 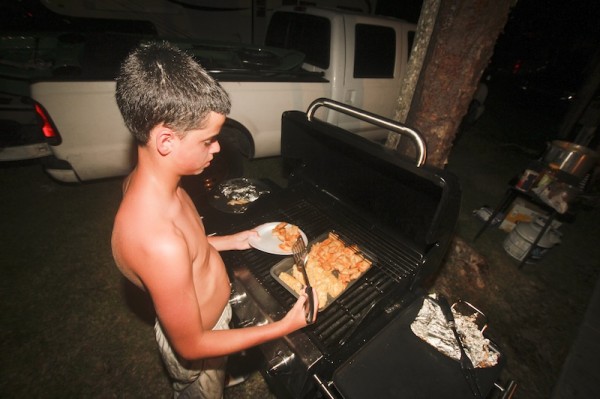 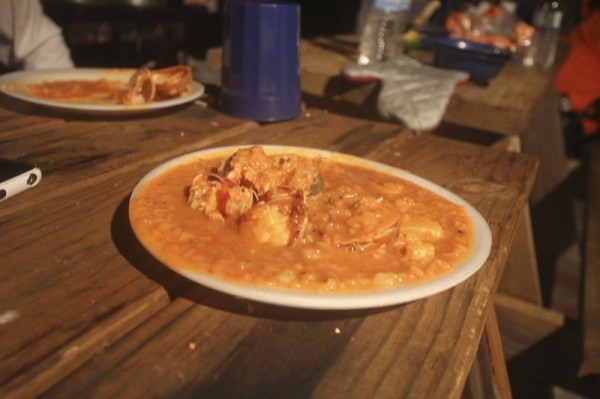 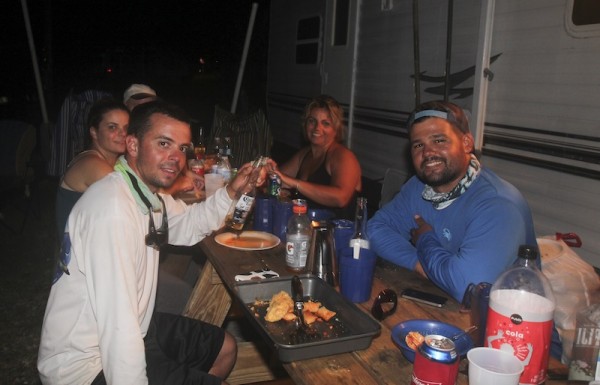 The plan today was to hit offshore in Jesus boat. Iv’e been wanting to catch a Mahi on the long rod for quite sometime. As usual we got up super late, the weather didn’t look so good, so we stayed chilling in the Rv. After breakfast I decided to take out the vise and tie some flies and see if the weather would clear up. 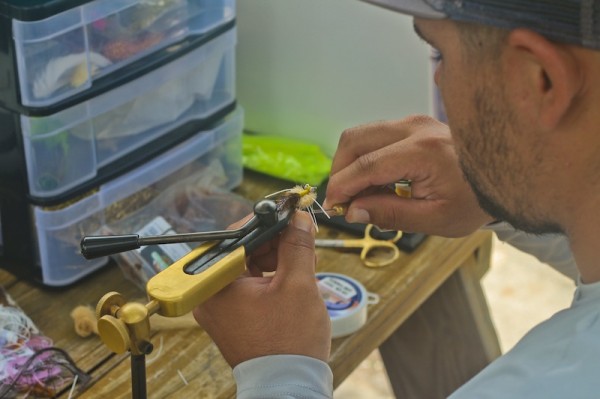 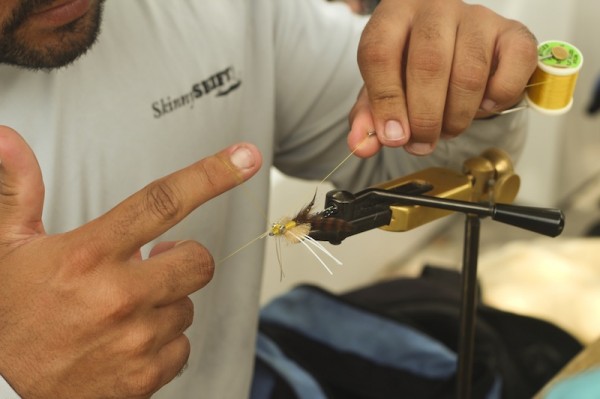 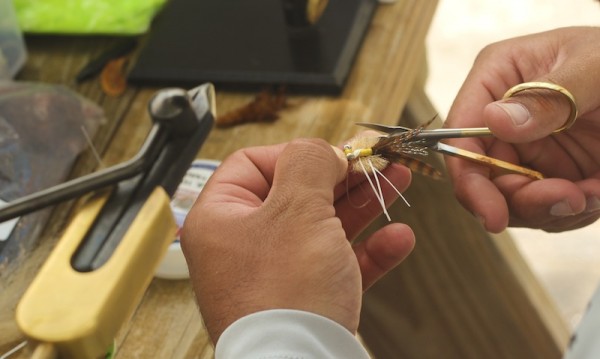 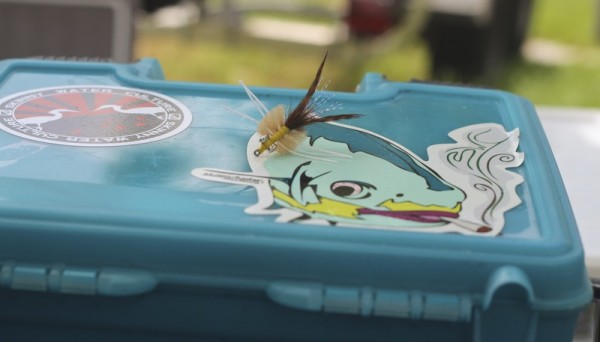 The winds finally calmed down, we loaded up the Diablos and hit the water. Today we thought we wait for a good tide and just chill. We were mostly inside the water through out the day. We were just taking random pics and having fun on the water. If we ran into fish, it would be a bonus. 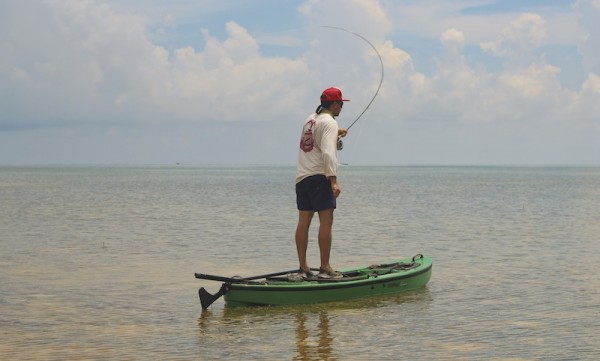 Pk was paddling over a flat and stumbled across this beautiful Starfish. It was the biggest iv’e ever seen in person!! 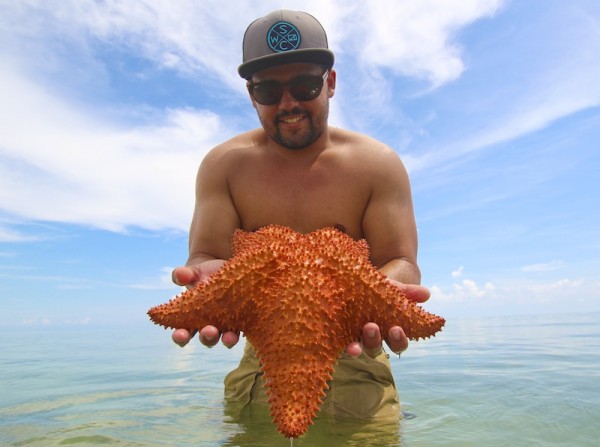 Once the tide got right, the wind didn’t. We couldn’t see anything and the wind was horrible towards the end of the afternoon. We only had one chance at a school of bones but they spooked. No fish were caught today but it was an awesome time. We decided to head home. 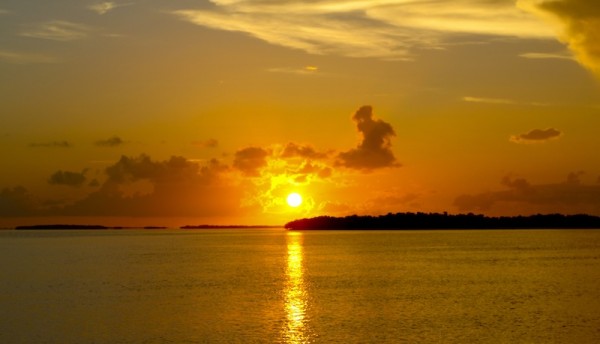 I wanna thank PK and his family for opening their home to me. It always a blast when I get the chance to stay with them. I had a great weekend and I can’t wait to go down to the keys again.