Knowing What To Look For 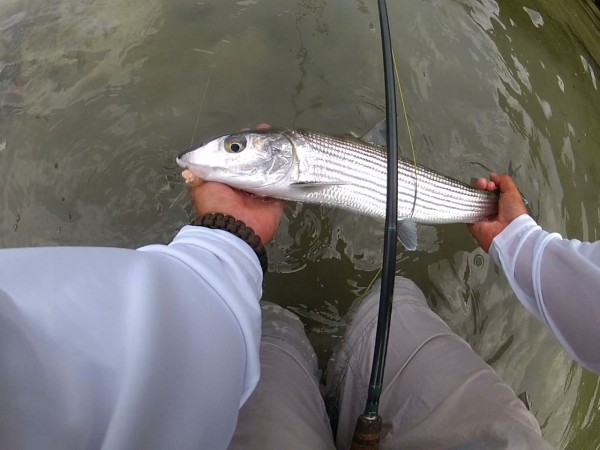 By the third day I had fallen into a routine. Adjusting to “island” time, I found myself sleeping in late, sitting and enjoying the view on the porch, and maybe fishing for an hour or two before picking up my brother from school. With bonefishing being as difficult as it is on the island, I learned over the past few years where the limited amount of fish are and when they are there. Before, I would fish all day with nary a bonefish spotted and only a few small snappers and jacks to even mention. Now, I was taking my time, picking my spots, and enjoying the rest of the time with a book, a view, and a drink.

So it was, that I headed to a small turtle grass flat on falling high tide. This particular section of water is only two hundred yards long and is fairly narrow. Fish tend to come onto the flat from the deeper water nearby. Some days there is a school of six-ten small fish but most of the time you are fishing to singles or pairs. One particular single, that kicked my ass on day two, is close to double digits but is incredibly wary and often sees me before I see him. On day three, I headed back for some revenge.

I walked the flat twice, securing bonefish number two on the second trip. The flat is ideal to walk since the sun and wind are at your back. The difficulty is in seeing the fish. On day two, I spent most of my time looking for a darker shape along the turtle grass bottom because that was what they looked like last year. With partly cloudy skies, high winds, and cresting waves it was very difficult to see a lone fish approaching from a far. When I finally saw the big guy he was a lighter color, which surprised me. Often you need to know what to look for before you actually see it. With that image in my mind I headed out on day three with cloud cover and the aforementioned winds and waves. I spotted a bonefish along the mangrove glide over a three foot patch of sandy bottom. A long cast landed a few feet away and I immediately tied into a different fish. The invisible one over the turtle grass bottom. I didn’t complain because with bonefish, more than any other species, you often catch the one you can’t see, even if you know what you are looking at.