Took a trip down South over the weekend with two buddies, Doug Schallmoser and Spencer Goodwin. It was a tough two days of fishing with 12 hour days back to back. We must have covered 30 miles on the kayaks. Had some good shots at a few bones on day 1 including one I had eat but didn’t get the hook in. We saw a few permit but none seemed interested. Day 2 went a little better although the fish were still really spread out.

Seen two huge perms on this little 100yd stretch…I had a great shot but didn’t get it done. Its amazing how a 30lb fish can vanish in 2ft of crystal clear water. Truly an amazing specimen!

Doug Schallmoser nailed this 32.5″ He caught it out of a group of 4 tailing in a foot of water.

On the way back in Spencer Goodwin spotted a nice fish tailing in 3ft of water. He wasn’t rigged after an encounter with a pesky cuda so he called me over to take the shot…I gladly accepted! 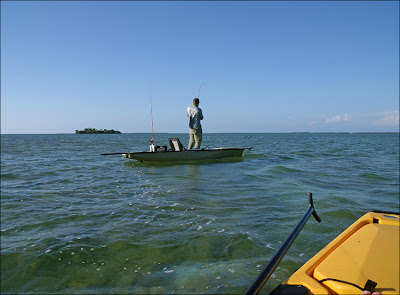 About 15 minutes into the fight a huge 9-10ft shark appeared out of no where to try and eat my permit! Luckily my permit escaped. I put the mustard to him despite the 10lb braid on my ci4 3000. The fish was 28lbs and my biggest to date.