After three days on my brother’s home island we embarked for the last time to another island, a little ways northeast, that is home to robust flats and large bonefish. I picked Matt up from school on a Friday afternoon, rescuing him from cleaning up his classroom, and we embarked on the afternoon ferry for a weekend of fishing. On Sunday, he would go back to work and leave me deserted on the island for the remainder of the week. Being the good brother that I am, I decided to fish for bonefish rather them help him pack to move to another country.

We arrived just in time to fish for tailing bones as the sun set. We each had a chance but being a little rusty, we spooked both the fish in mere inches of water. 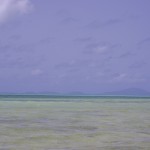 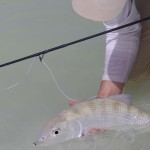 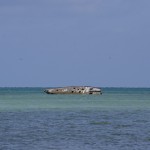 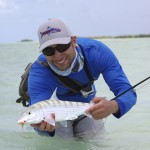 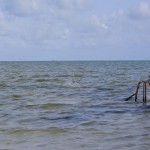 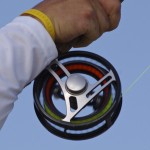 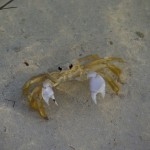 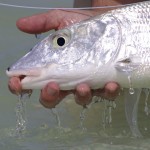 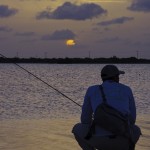 In the morning, we headed east, as far as an on foot angler can go on the island. There, one can access the flat and walk all the way back to the ferry dock. Knowing how grueling that can be, we just decided to walk a small section of it.

Matt took the outside lane in water 1-3 ft. deep. Here the bottom is mainly sand intermixed with a mottled bottom. I took the inside, mainly a mottled muddy bottom interspersed with mangroves large and small. Matt hooked up on the first fish of the trip as a small school of four bonefish meandered his way to his outside. He was all smiles.

A short while later, I hooked up on a fish coming off of the mangrove shoreline. He took the fly immediately and I survived two backing runs in and around the mangroves. As I was recovering my fly line the second time, he popped off over a purely sandy bottom leaving me a little perplexed.

Down the flat a ways, I spotted a large permit circling and tailing in a slightly deeper section of water. Wading a flat, your visibility window shrinks dramatically and I didn’t spot him until I was almost on top of him. I was faced with a decision: keep my bonefish fly on or quickly tie on a crab pattern. I chose to keep my current fly and not risk him spooking. With my heart in my throat, I laid my fly out and began popping it back with long strips. The permit was on the fly and following all the way to my rod tip before spotting my silhouette, casually turning, and leaving the flat to my utter dismay.

After a long time with nothing to see, we decided to re-walk the entire flat. I was able to exact revenge and catch the smallest bonefish of the trip while Matt had a shot at another large permit.

We took a midday siesta, heading to a local bar and getting some cold drinks into our system. Then we hit up the beaches looking for tailing fish in skinny water.

For the rest of the evening we only had a few shots at some extremely wary fish. One particular fish was a brute, not very long, but tall and round. He was actively feeding with half his body out of the water where the small waves crested onto the beach. I waited for him to come off the sand to present my fly. He pounced and took off to the horizon line. Once again, I survived two deep backing runs before he rubbed me off on the bottom, something that ended up being a re-occuring theme of the trip.