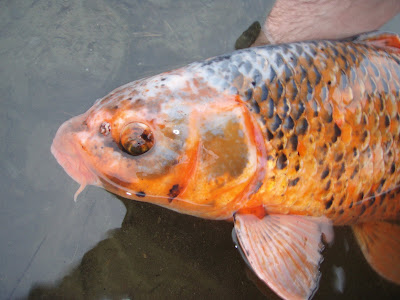 Last year we set a goal to catch at least one carp per month, January through December. This came about spur of the moment after Mark landed his first of the year in January. Neither of us got it done. I failed in January and had to wait eleven long months to try again…
JANUARY: 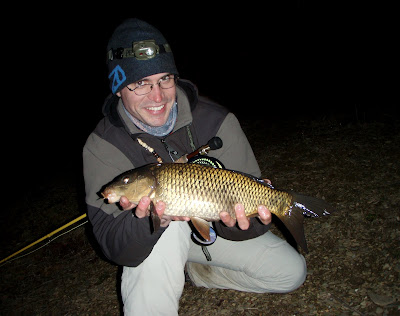 Eagle Claw Featherlight 5/6…FTW!
Since I did well throughout December I was lulled into a false sense of security regarding January. Midway through January I all but threw in the towel and was prepping myself for yet another failure. I fished for three weeks without seeing a single glimpse of gold. With one week remaining I decided to put in some overtime and continue my pursuit into the night. I abandoned my favorite haunts and returned home to the birthplace of my addiction. I arrived to discover that 9/10ths of the tiny retention pond was covered in ice. Taking a few casts, I slowly worked the edge of the ice treating it like an undercut bank. I connected on the third cast and brought my first of 2012 to hand. 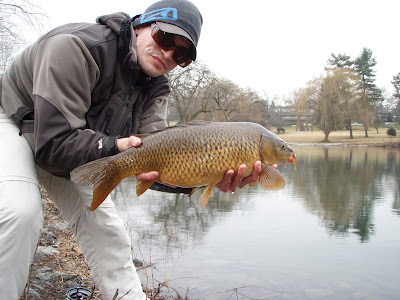 The next morning I headed to my favorite spot to see if I had any shit luck left over from the night before. The morning started out fast and furious, landing two fish in a matter of minutes. What a relief it was after three weeks without seeing a single fish. I spent the next five hours not seeing a thing until a familiar sight caught my eye. It was the orange koi. This fish has provided us with excellent casting practice over the past three years, rejecting each and every fly thrown his way. It’s become routine for me to make a cast to him and feel completely confident that he’ll refuse the fly, without question.
So as usual I make my cast and watch him follow my fly all the way to the bottom before veering away as usual. Now normally I would continue my search elsewhere, but after not seeing much of anything else I figured I would amuse him one more time. I switched flies and looked up to see if he was still there, but instead of forty feet away he was fifteen. I made my cast and waited for the usual to commence, but it didn’t… 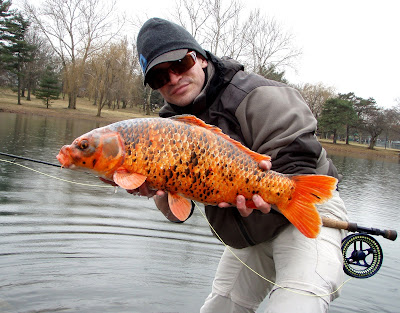 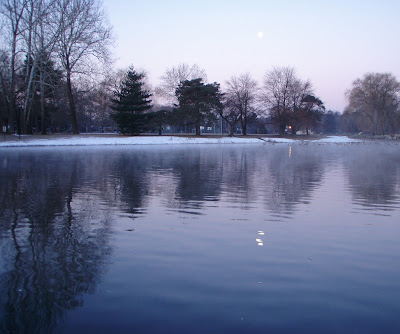 It was a chilly start to February but temperatures steadily rose into the mid 30’s by the second week. I was seeing carp in good numbers but getting my fly to them was a different story. They were concentrated far out in the middle of the lake in its deepest section. They were slowly moving around but showing no signs of feeding. I needed to be persuasive… 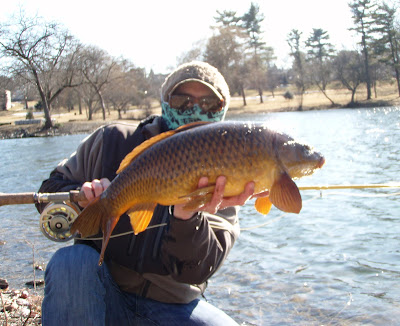 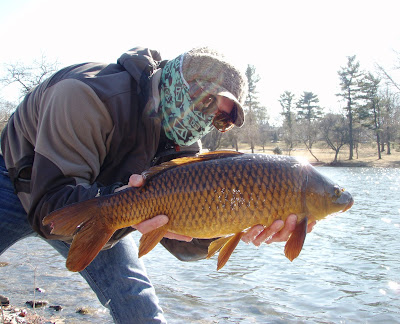 Same Fish…
I sealed the deal for the month of February by overcoming some serious adversity. Conditions that day were so horrendous I ended up driving back home to get some heavy artillery. Winds were sustained at 30 mph which made long distance casting a joke. At home I grabbed a new arsenal of rods and lines and headed back to employ some unorthodox methodology.
That afternoon, the technique “Skagit Carpin” was born. I rigged up my Eagle Claw Featherlight (which is really a 7/8) that I since modified into a double handed bookstick. I chose to build a custom tip by looping my Beulah 425 grain Tonic Switch Head to a 10’ (tapered) floating tip from RIO’s Scandi Short VersiTip opposed to a floating MOW tip to soften the landing. I couldn’t have been more pleased with the results. I was able to get my fly to the fish with ease. I opted for a fly I call quick-sight jumbo spawn. It’s a #4-6 (SL45 Bonefish hook) basic egg yarn sucker spawn with a bright yellow bead in the center giving it excellent visibility. If it doesn’t scare the fish shitless I like using it at distances of 50+ feet because it stands out like a sore thumb. It makes the question of when to set the hook a lot easier. I only caught one fish that day, but a one fish day is a good day. I caught another fish the next day under completely opposite conditions reverting back to normal tactics. 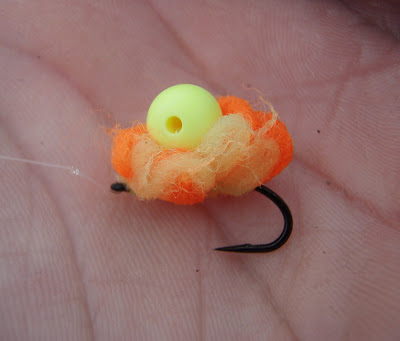 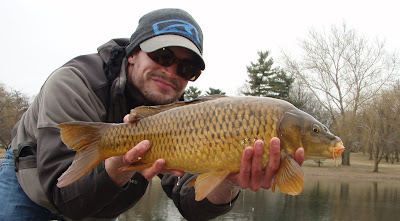