For the past month or so, a few friends and I have been trash talking back and forth. As the time came closer, the more and more trash was spoken. It was all about the second annual Don’s Bait and Tackle Backcountry Blow Out tournament. Last year, my buddy Alex Hernandez and I managed to take home the prize of “Grand Champion Team”. For having the most points (inches) by slam, for both anglers. This year, our goal was simple. Repeat.

We decided to prefish the Thursday before the tournament. Leaving Friday for the Captains Meeting. But on Thursday, we didn’t see many redfish. Not like we had been seeing for the past three months. But the few that we did see, were pigs. We also went in search of snook. It was really the first time we specifically targeted snook since last years tournament. We poked around in a few places and did pretty good. Then we were off to find trout. Yet another species we hadn’t targeted in a year. We weren’t seeing anything at the first few spots. I decided to run to a spot that used to hold large schools of big trout back in early 2010. And sure enough, we were greeted by large schools of trout at and over 20″.
We were feeling good about our findings, but the redfish was now starting to make us worry. Friday night came, and we were off to the Captains Meeting. Hung out with friends, talked smack while drinking some beers. But all that I had in my mind was another Jorge Martinez painting to hang on my wall, next to last year’s award. We got back to Alex’s house where we had my Copperhead waiting for us. We rigged up the rods and set everything where we wanted it. Then, we hitched the skiff to the truck and left it in the driveway; ready to roll. We woke up at 4 am and jumped into the routine. Fuel up, get ice, etc. Made it to Don’s for check in at what we thought was early. But more than half the teams had already checked in before us.
We’re back on the road on our way to Flamingo. We finally got to the ramp and were greeted by darkness and strong winds. We decided to head out, anyway. We just took it easy, keeping an eye out in the dark to make sure we stayed on course. Our game plan was simple. Go catch our snook at lines in, then move on to trout. That way we can invest the remainder of the day looking for those big redfish that had eluded us two days before. But in the back of my mind, I wanted to get the big reds out of the way first. The tide was just right, but it would involve poling for hours across a flat. I knew it should pay off, because all we wanted were the Flamingo giants. Finally, I convinced Alex to allow me to break away from our game plan, and go with my gut feeling. And boy, did it pay off.
I poled and poled, and poled some more. With nothing in sight, but a few wading birds. Catching a glimpse of something at the surface in our peripheral vision.  But it was just bait and other nonsense. We finally spot a couple tails pop up, and I pole on over to them. But by the time we got into range, they never showed themselves again. We had yet to make a cast for the day. Moral was a little low. When Alex looks behind us and spots this massive wake heading our way. I spun the skiff around toward it and waited. It was coming straight to us. Alex made his cast and it was on. We got this big beastly redfish in and layed it on the deck. It measured out at 34″ on the tape. Snapped the required tournament picture with the secret item and were on our way. High fives and loud shouting. For we knew we were officially on the board. And on the board with a biggun. We poled after a few schools of bigguns but I was unable to get another 30+ incher into the skiff. We kept poling along our way where I spotted a red out the corner of my eye. I made a cast at it from the poling platform and brought it in. Not a beast, but a overslot 28.5″ redfish. We decided that those two should be enough, and began the long hike off of the flat. Along the way, we were surrounded by countless amount of 25″ redfish. They were tailing and laid up all around the skiff. We couldn’t help but cast at them. We caught somewhere over ten of those while on our way out. We had to stop casting at them to not lose track of time.
We were finally off the flat, and on our way to get the trout. We ran up into the spot and I instantly hooked into a giant trout. It came off before I could get it into the skiff. We fished for another 20 to 30 minutes, there. We pulled out somewhere around ten. The biggest I caught was 23″. Alex wasn’t too far behind with a 20 incher. We were comfortable with those points, and decided to move on to get the snook.

We get to the spot and in less than half an hour, we put two into the Copperhead. I caught a beefy 33″ snook, and Alex wasn’t far behind with a 32″ snook. We now felt VERY comfortable. We felt that we had put some big points on the board. And we did all of this before lunch time. We were running back to the marina around noon with both slams recorded. We poked around a few more areas around the marina. We were looking for anything to get a kick out of. We finally decided to call it a day at about 1pm. We got the skiff back on the trailer and were on our way. We made a pit stop at the car wash to give the skiff a good wash down. We were at the weigh in just at lines out time. Then the waiting game began. I meant to take pictures throughout the award ceremony and raffle, but too many beers had faded my thoughts. I was a bit nervous.

Alex came in at 86″, and I wasn’t far behind with 84.5″. With these numbers, I knew we would do alright. I figured if someone topped that, then I wouldn’t feel bad for losing. Cause we at least put up a fight.
As Ashley began to announce the Awards, I knew we did pretty good. There was a tie for biggest snook at 35″, and a tie for biggest trout at 23″. I was beat out by time for the biggest trout award. But Alex came through winning the biggest redfish award with his 34″ slob. He went on to win the Top Angler award. And we repeated our Grand Champion Team award. 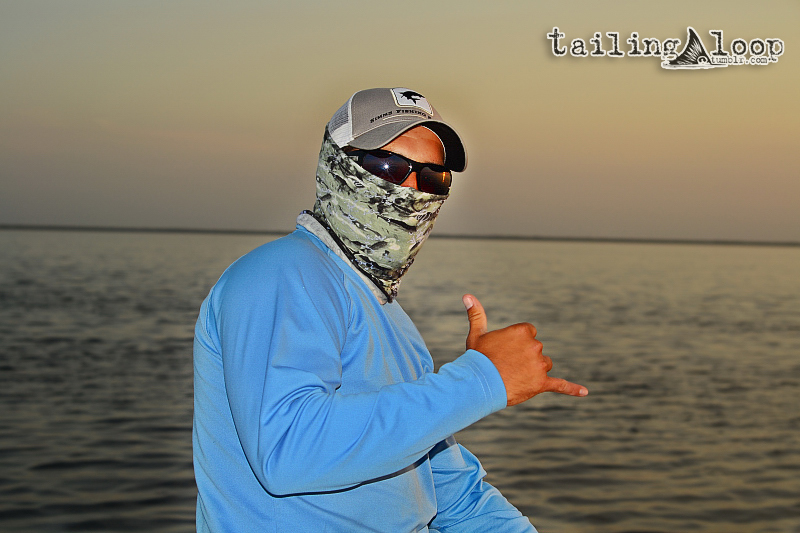 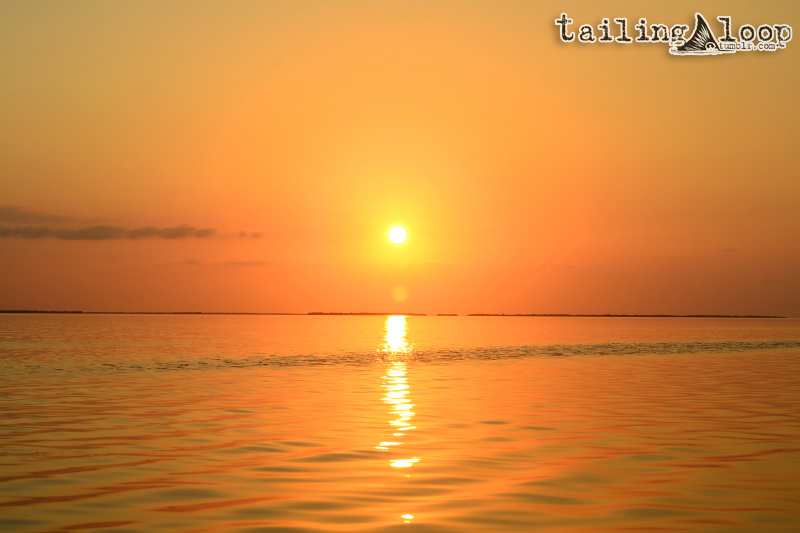 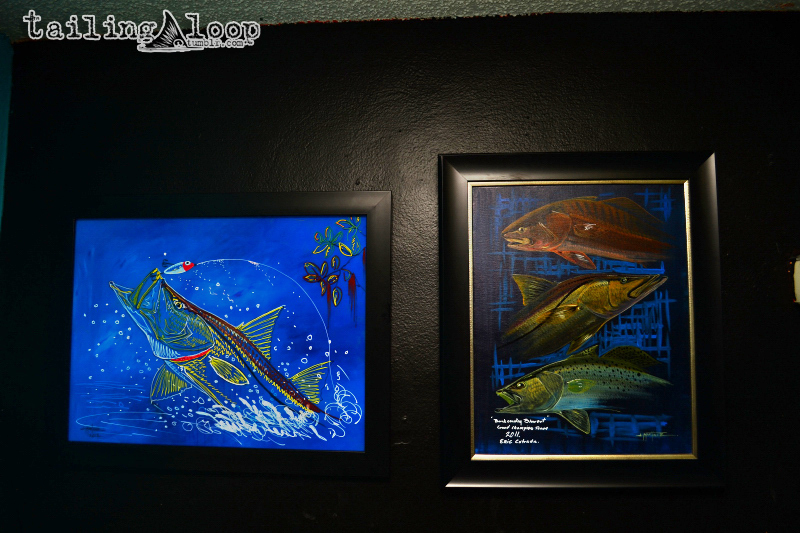 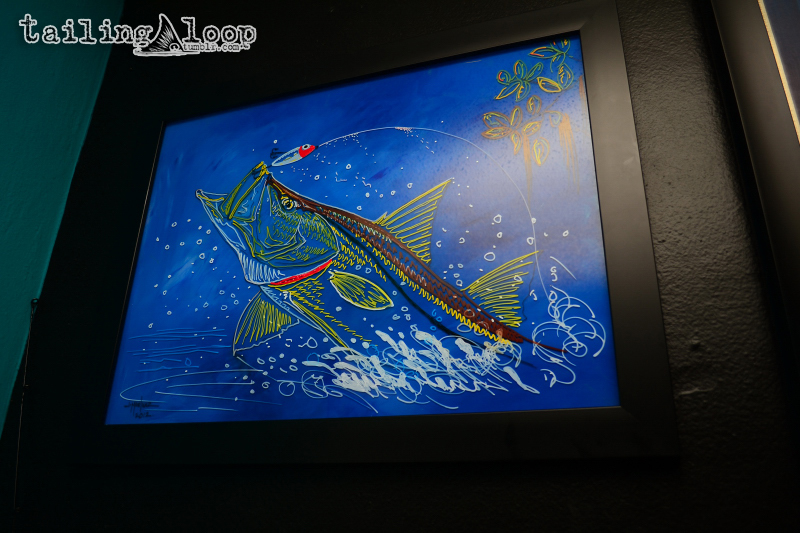 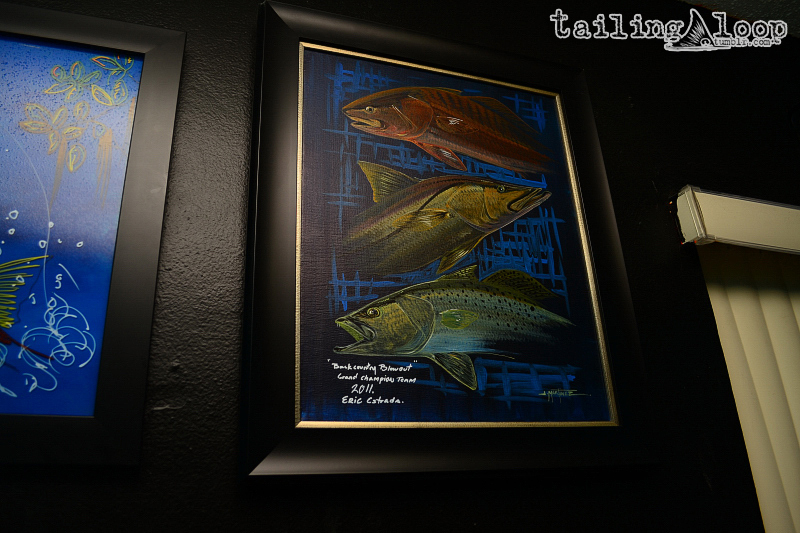 Alex Hernandez, artist Jorge Martinez, and myself holding the awards we took home.
I would like to thank Ashley for doing a great job setting this thing up and making sure everything went smoothly. Great tournament with great turnout over 40 teams for a great cause.
Sorry I didn’t get many pictures, we were on a mission to put up big numbers.
Now that the tournament has passed, I think it’s time to chase some silver species across Biscayne Bay. Bones Beware……

I’d also like to thank Bob of Strongarm Products for the sweet “hoodlum” shirts he provided us with. And even though I’m on his Pro Staff, he allowed me to redeem a gift certificate that I won in the tournament raffle. lol Rather than forcing me to resubmit it for raffle. $100 off is $100 dollars off! lol