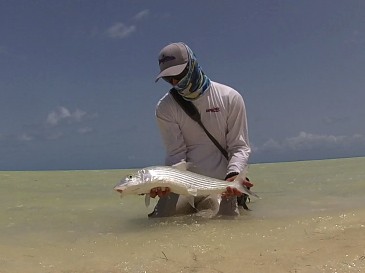 It is the latter half of the trip and I am all alone on the island sleeping in a hammock on the beach. The night before storms kept rolling through, leaving my gear and sleeping quarters soaked for most of the night. With only an hour or two of sleep, I embarked on a grueling hike filled with a lot of shots at big bonefish. Everything that could have went wrong did throughout the day. I had fish break me off and rub me off on the bottom. I spotted fish from a distance, blinked, then lost complete sight of them. I had small jacks swoop in at the last second and steal the fly from a pouncing bone. I also flat out missed a few casts thanks to a great crosswind. I had bones chase and refuse my offerings forcing me to contemplate and change fly selections multiple times. I even had one of the largest bones I have ever seen follow a fly to my rod tip as I basically laid down in the water. At the end of the day, after six miles of walking, chafing, and rubbed raw ankles, I had two large bones to my name including the heaviest of the trip. Despite the blown opportunities, it was a great day on the water.