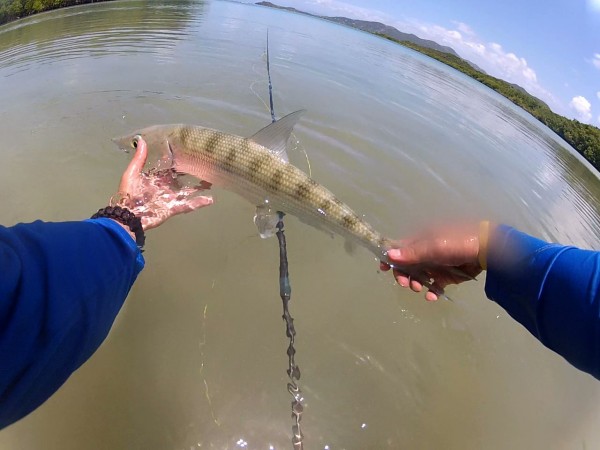 With my brother still teaching for most of  the trip, I was flying solo around the islands and hitting up some favorite spots for the last time. This meant that I would have little opportunity to get some proper images. Most of the images from the trip will be GoPro video stills (sorry everybody). Last year we explored a more remote flat hidden by a deep lagoon. However, a storm system and a thousand mosquito bites really put a damper on any chances at a bonefish. This year, I had sunny skies, a whole afternoon, and a falling tide. After a “secret” mangrove tunnel, I emerged into a large sandy cove. After a few minutes of searching, a small street gang of four bonefish emerged from a clump of mangroves and headed in my direction. After pulling my fly out of the lead fish’s (and largest) mouth, I settled for the second one in the group. Last year, it took 17 days for me to catch my first bonefish on this island (no joke). This was day one.

As is often the case here, I didn’t see another bonefish for the rest of my day. I picked off several willing bar jacks (blue runners) on the flats and a few more between the large boulders at the entrance of the lagoon. The highlight of the day was breaking off a huge snapper that took a mantis shrimp. Looking back on it, I probably didn’t stand a chance on my 6wt. anyway. Besides that, I lost a dozen flies on small barracudas blind casting in the lagoon. Lesson learned.