Fishing the Flats The Mac Dill Air Force Base

The flats around the Mac Dill air force base have been off limits to boating and fishing since the events of September 11th, 2001. Since then the flats have been no-mans land and every seasoned bay area angler would be keen on any opportunity to drop a line. I opened a message from one of the guys at Operation Home Shores saying that they were opening the gates so to speak and allowing the public to fish the flats for a day. I needed to know more. I was then filled in with all the details required In order to participate in a day of fishing around the base. 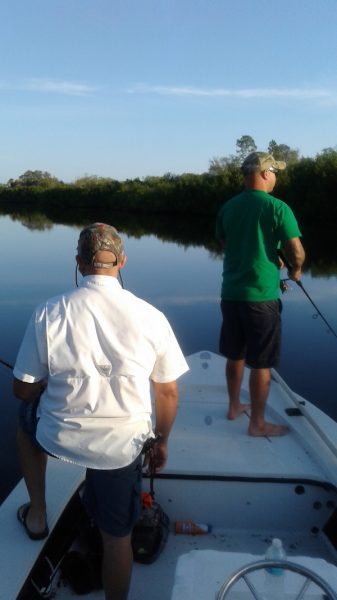 I needed a few things: 1. Notify them of my desire to participate in the event, 2. Who my passengers will be, and 3. A background check on each attendee. The first person to come to mind was a cousin of mine that also happens to be Combat Arms Trainer at Mac Dill and owner of RK Training Dynamics.

Our sons are the same age so we often spoke of making a fishing trip happen, and the time was finally upon us. I called him up and we discussed a third member and quickly agreed his father-in-law would join us as well.

It was the day before our Mac Dill flats excursion and I was out on the boat with my son. I reached for a chicken salad sandwich that had been in the cooler from the previous days trip.or maybe it was from the one before that… Complaining of his hunger I offered my son the questionable chicken salad and he wisely refused. Naturally, I ate it. Needless to say, later that evening I was hugging the toilet and taking the fetal position. I’d been looking forward to the next morning for over 2 weeks and I was not about to let some mystery sandwich take that away from me. I woke up that next morning at 5 a.m. barely alive but managed to get the skiff hooked up and started making my way to the base. 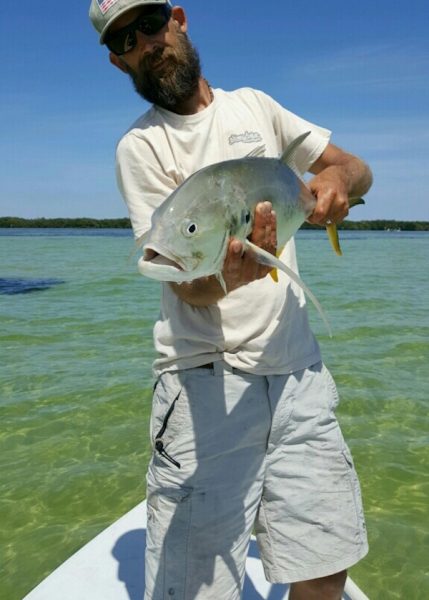 My intentions were to throw bait all day. But after a few casts with no bait and the smell of chum singeing my nostrils and heavily reminding me of the questionable chicken salad from the previous night. We decided to switch to artificial lures and take advantage of the remaining tide. We tucked into one of the backwater creeks and found rolling tarpon in the first bend.  For the next couple hours we unsuccessfully tried to get one to eat. The two anglers aboard weren’t overly impressed at the sight of tarpon without hooking into one, so I knew something had to happen. We pushed out of the shallows and jumped on plane to go find bait.  We hit three of the four tripod towers around Beer Can Island and with sparse baits around each, I was getting pretty discouraged to say the least.  We pulled up to the fourth tower and as one of the bay boats was pulling its net in.  They had enough baits in their net to overflow our small live well.  I quickly jumped up on the bow after this encouraging observation  and dropped my net a safe distance from the structure.  STILL NOTHING!  I brought a net that didn’t sink very fast because I planned on getting bait on the flat not in 20 feet of water. I gave it another shot and had Ryan pull the skiff around the tripod again. I threw the net into no mans land.  As it sank I could see the silver inside of it. FINALLY!  We loaded the well and hauled butt back to the place we had started.

Now it was on. My stomach pain dissipated as we got pretty consistent action fishing the golden flats all afternoon. There was a noticeable difference in the attitude of the fish near the base.  Although just a short distance from the rest of Tampa Bay, it was like these fish knew they had the protection of the United States Air Force.  At least on most days. But not on this day.

We wound up catching snook, redfish, jacks, ladyfish, and a couple catfish.  The tarpon continued to elude us.  If I get the opportunity to fish here again, we will be ready for the morning tarpon and the score will be different.  I enjoy every day that I get to be on the water and every opportunity to take someone out that doesn’t normally get that opportunity. All things considered, I’d have to say this trip was special.  Not only did I get to take a couple good friends fishing, but I got to fish a location that’s literally been under my nose, right in my area that never gets fished. 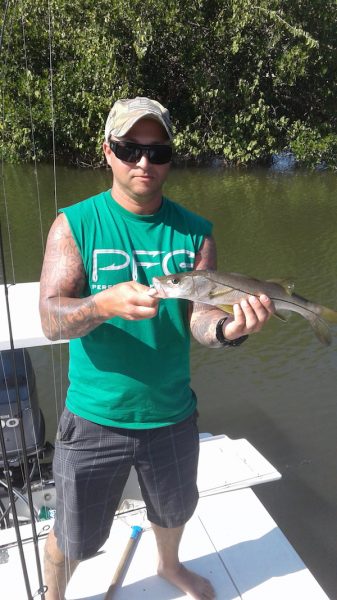 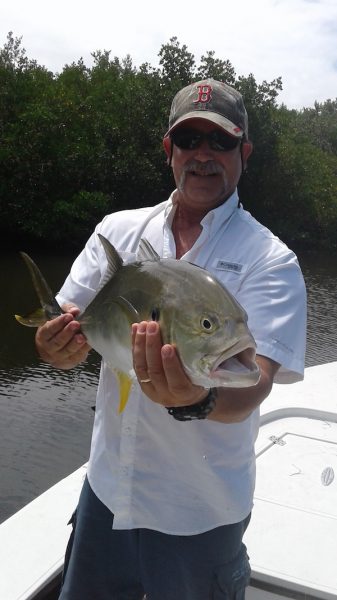 Ryan managed his first redfish about 21 inches and then beat that with a 26.5inch fish.  The day was then topped off with me getting taken to school by a big snook that ran me through the mangroves.  I couldn’t simply break it off so into the groves I went. After roughly 15 minutes of climbing over and under mangroves, I had her pulled right up to a big root with oysters on it. She was facing me about 6 feet away as I tried to get just a touch closer.  Right as I was approaching her, she shook her head and severed the leader just above the hook.  Ryan and Gary got quite the chuckle out of the escapade as we made our way back to the ramp. 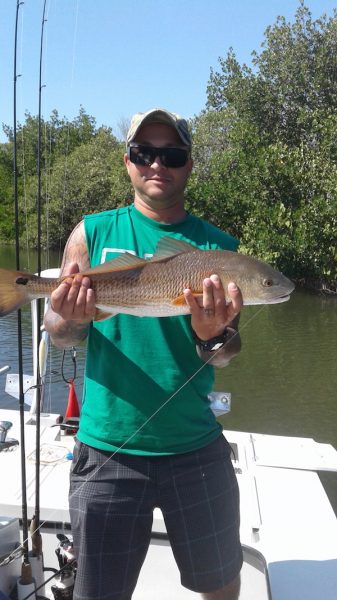