Six years ago I left south Florida, where my angling heart will forever lie, for New York City. I took a job with one of the preeminent seafood wholesalers in NYC, to run their twenty-five seat oyster bar and grill in Murray Hill, feeling at the time that if I was no longer able to launch odd and colorfully adorned, razor-sharp contortions of steel at gamefish in their natural habitat on a daily basis, that I could at least play mortician to any fish unlucky enough to have recently met their maker. So far it has worked out. More to the point, it affords me an opprtunity to spend time in the kitchen exercising many of the culinary tricks and treats that I’ve been able produce and accumulate over my 14 years spent sweating it out working every restaurant position you can think of on both sides of the food pass.  And THAT is why I’m here.  To offer a look at the “post-production” side of angling in addition to working with other delicacies whether they be animal, vegetable or mineral.  I also still manage to get myself good and skinny for a few days at a clip, seven or eight times a year to hunt fish and give myself more grey hairs, so of course there will be fishing reports too.  But enough about me, let’s get to the food porn! 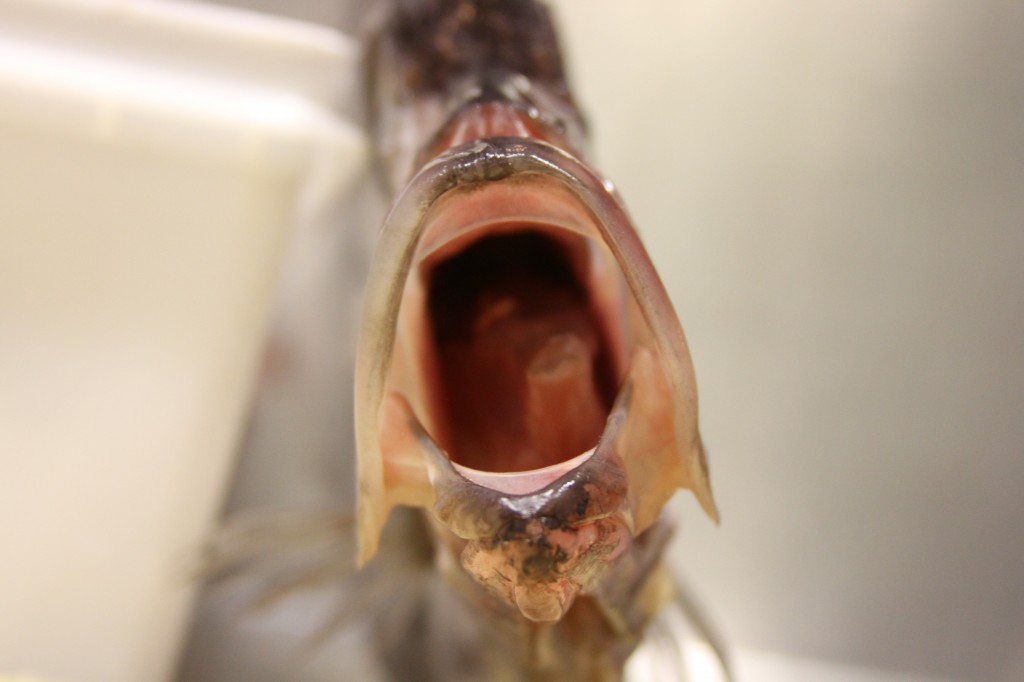 Despite Nemo bearing down on NYC  earlier this week we were able to get one more shot of some really pretty fish before the market went all haywire amidst the snowy apocalypse.  I arrived Wednesday to some pretty gnarly John Dory. 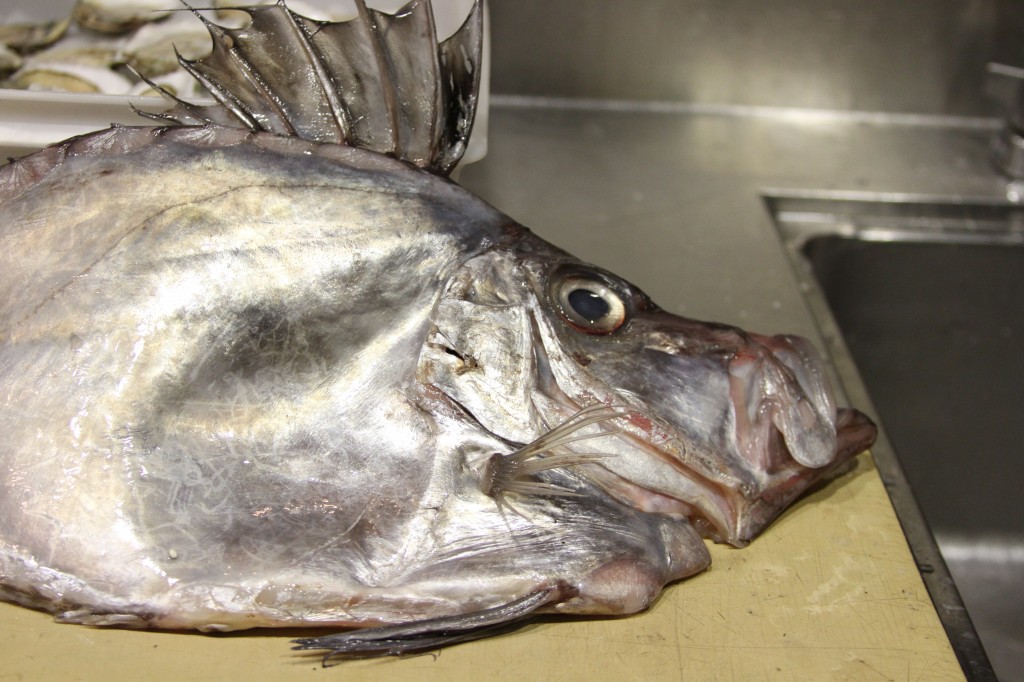 Zenopsis Conchifera or silvery John Dory, all punk-rock with the mohawk and hooked buckler scales that  put a poons to shame, occur in the western Atlantic from Canada’s Sable Island, south, to North Carolina, while occasionally popping up in European waters. They like to kick it on the edge of the continental shelf and down onto the continental slope, generally in depths of 100′ of water on down 2400′. Not many of these are caught on hook and line, and the majority of fish that come to market are bycatch resulting from deep water trawls.  So, sustainably speaking, silvery Dory is a pretty safe bet as far as I can ascertain.  The only real concern that pops up in the harvest of these fish is damage to the ocean floor by the trawling equipment. Unfortunately that damage can be difficult to determine given the depths at which the trawls are being fished. Silvery John Dory populations are in good shape since they’re difficult to target explicitly as they tend to be solitary or loosely schooled, so decimating huge amounts of them in one fell swoop (the way those idiots  in the 80’s used to do when raping schools of breeder redfish in the Gulf) isn’t a concern. And they get consumed once they do hit the market, so it’s a not a situation of these fish ending up in the trash once they’re out of the water. Just someones kitchen sink.

Their diet is mostly other small fish, though they will bang a squid if they can catch one. And I guarantee that one would eat a well placed slider.  They don’t get very big either.  Maybe 22″ and 4lbs on the high end. Diet and size end up translating into a fish with firm white flesh and a bright, meaty, medium-flavored profile. Maybe it was the thought of battling a snow storm, but when I saw the fish in my walk-in my mind went to one place….straight FIRE, son!  I love the grill for fish like this (pompano or a smaller african pompano would work in this application too) because they have just enough fat content to not desiccate or come apart over  an open flame,  and they have enough flavor to stand up to the smoke and char left behind. 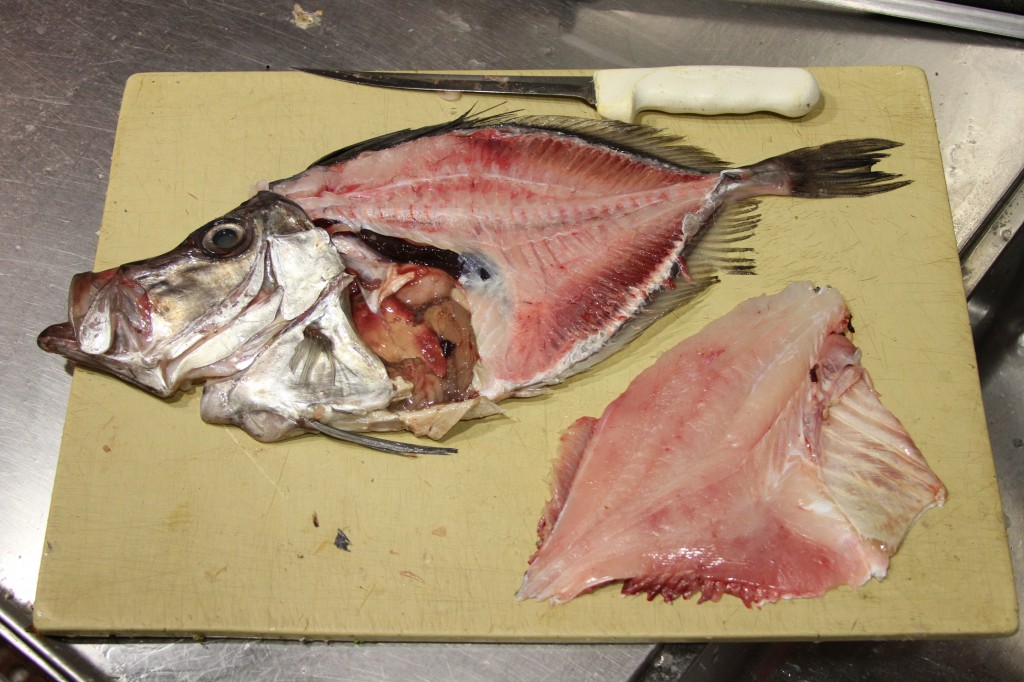 Once you get the fish cut, trim off the belly flap, as there isn’t much there worth keeping, and do so on the high side of the rib pin bones, so you don’t have to worry about them once you start eating, and trim the edges where the fin rays connected to the fish. And please, leave the skin on. It’s delicious, full of all those fishy oils and proteins that are so good for you, and it helps keep the fish together on the grill. The best way to compliment those flavors and this type of fish is to stay fresh and simple and herbaceous. 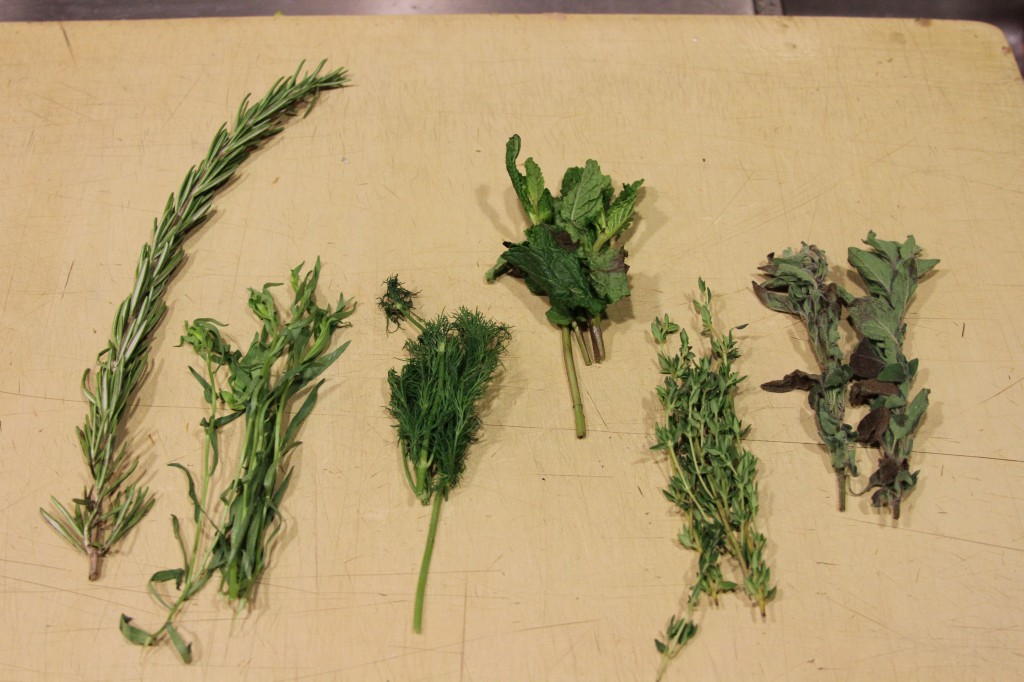 How does your garden grow?

Leave the kind-bud in the garden and go straight for these six: rosemary, taragon, dill, mint (I fucking love mint with all fish and anything grilled), thyme, and sage. What you get with these herbs is a great balance between deep, earthy notes and super fresh, green flavors.  Pick the leaves, discard the stems, combine all the herbs and give them a rough chop. You want them uniform in size but still identifiable. After that move the chopped herbs into a mixing bowl and add about 1/2 a cup of your favorite high-end olive oil.  Don’t cheat on olive oil with a something like canola or grapeseed.  It’s the base for your “sauce” so it’s worth using something nice with good flavor. 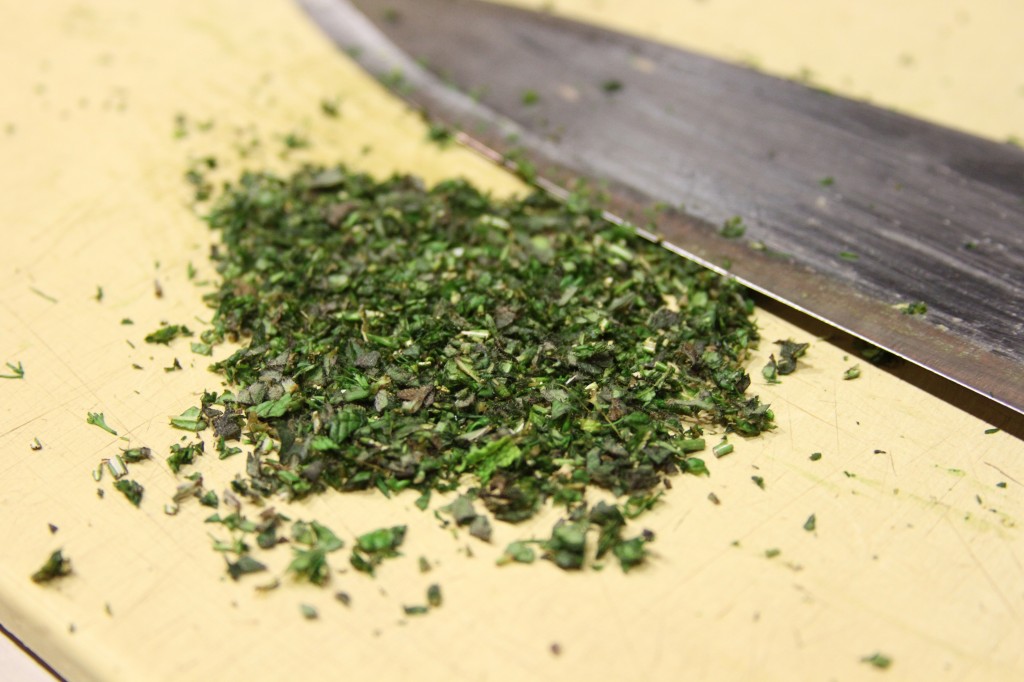 Once you’ve got the herbs and the oil together in the bowl bust out a whisk (an egg beater works well if you’re making this in bulk) and just beat the shit out of the oil until it starts to emulsify. Keep going until the texture of the oil starts to get less viscous and more creamy. Puffy. Aeration is key.  Once you get the emulsion nice and pillowy set it aside and switch back to the fish. 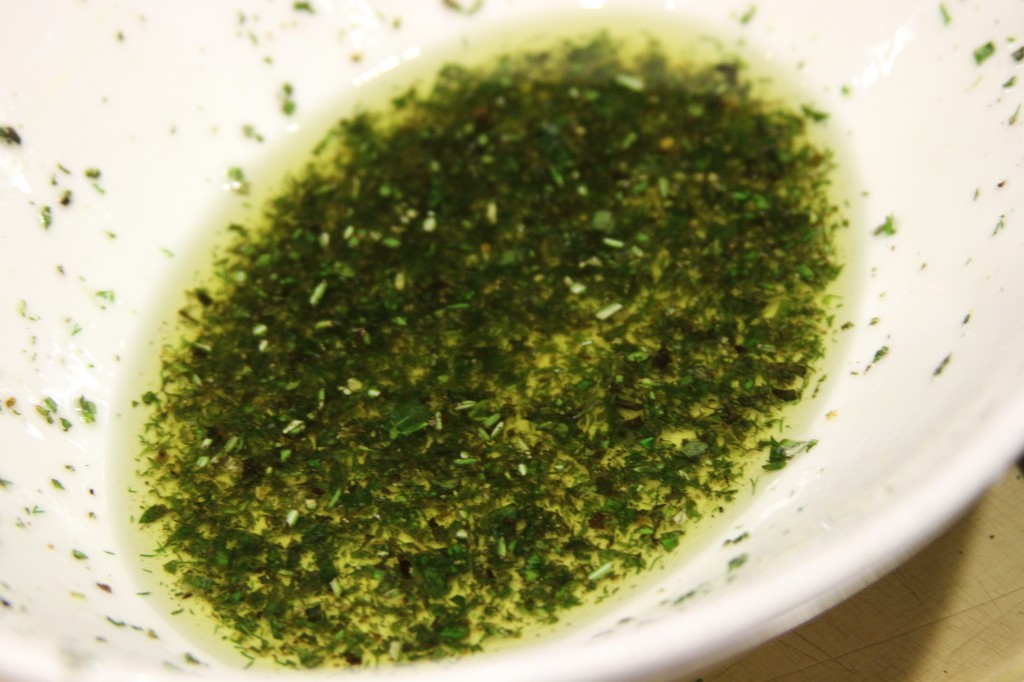 Season both sides of the fish with sea salt and cracked pepper.  I like to stay away from any other seasonings as they tend to interfere with the clean nature of this dish. Get that grill cranked up on high heat and get the fillets on. This is crunch time, like there’s-a-fish-at-930-moving-away-fast-and-you’ve-got-one-shot, crunch time. You have to be all over it.  Otherwise the fillets are gonna burn. Start the fillets skin side down and apply light pressure to the top of the fillet after initially laying it on the grill slats.  Always do this.  This keeps the fillets from curling up into nasty little balls of smoking flesh. Also, it’s gets the skin nice and crispy.  Basically you’re making fish bacon. Fish bacon, people. 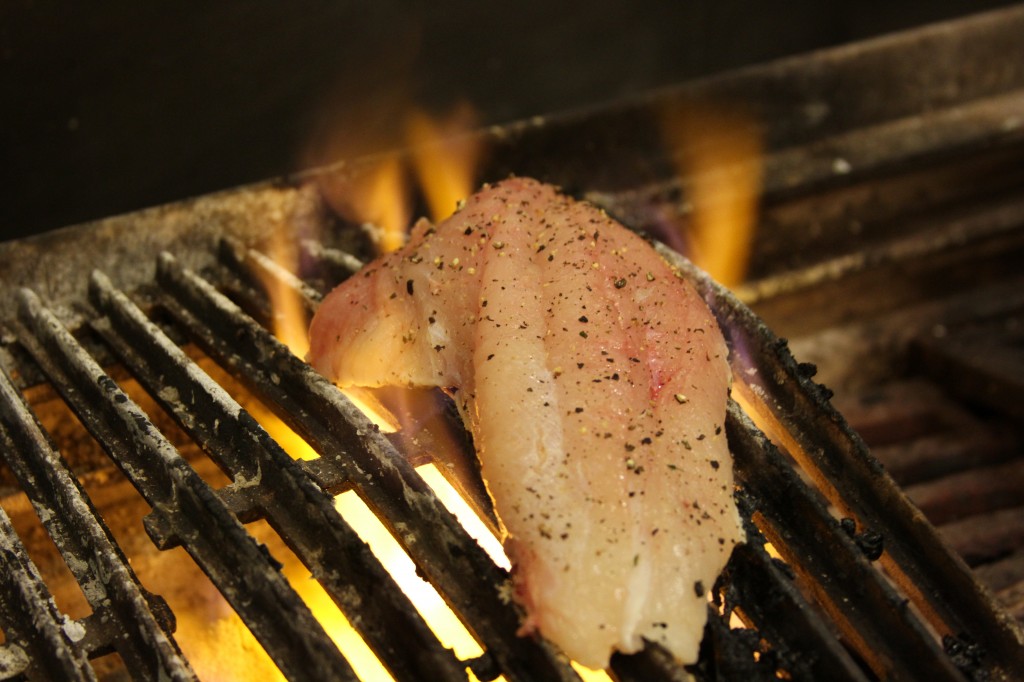 Once the fillet starts to turn white at the edges, and the opaque color has the translucent fresh flesh trapped to the middle third, then you know it’s time to flip that switch. 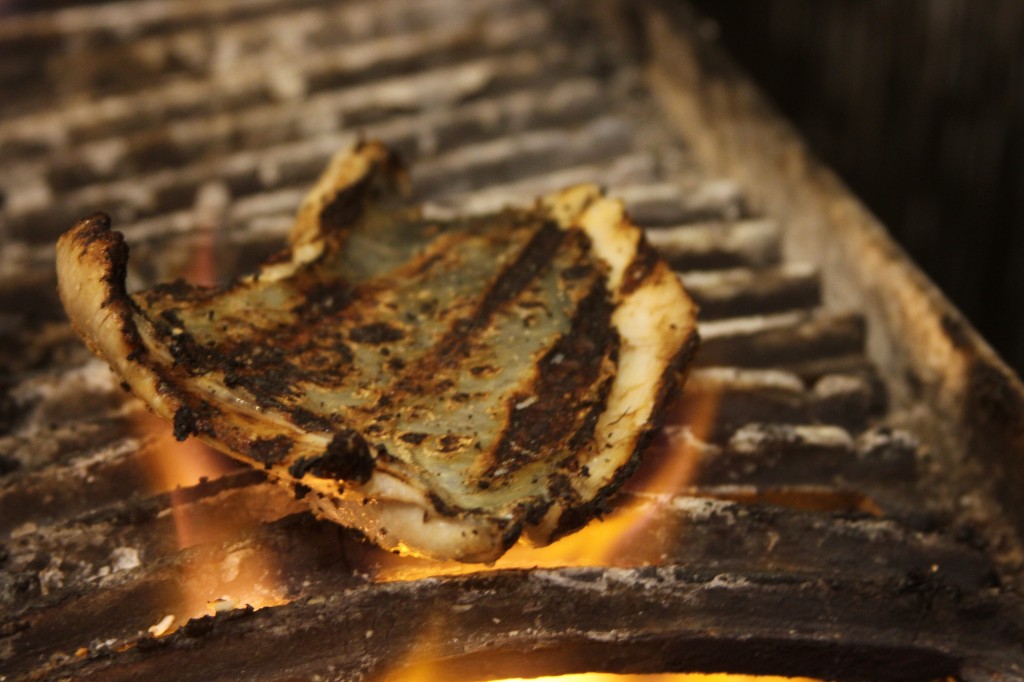 Another few minutes, three at most, and that daddy is done.  While the fish finishes, grab that herb emulsion again and whip it through once more.  As soon as the fish is done, pull it off the grill and go right onto your plate or serving platter and spoon the herb emulsion directly onto the fish.  The fish is still going to be cooking and it’s going to absorb some of the oil and that’s going to enhance the silky texture of the fish and add a little bit of richness as well.  At the same time the heat coming off the fish is going to steam the herbs in the emulsion and activate all the sexy aromatic qualities of each herb, equally drawing the flavors in while releasing those good, steamy feelings into the air. It is, in a word, dope. 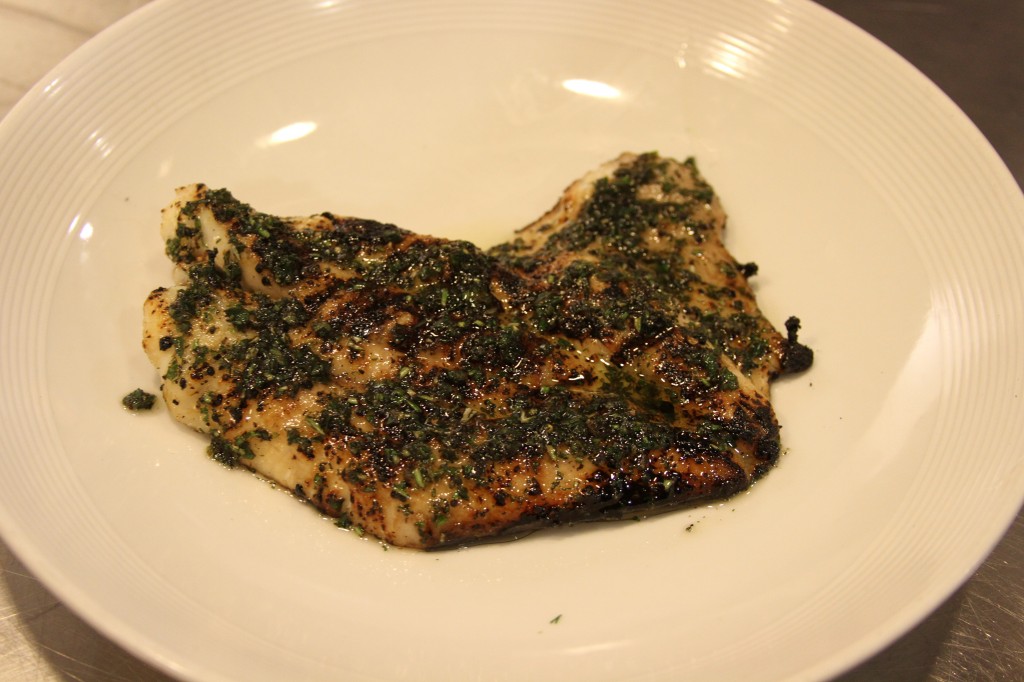 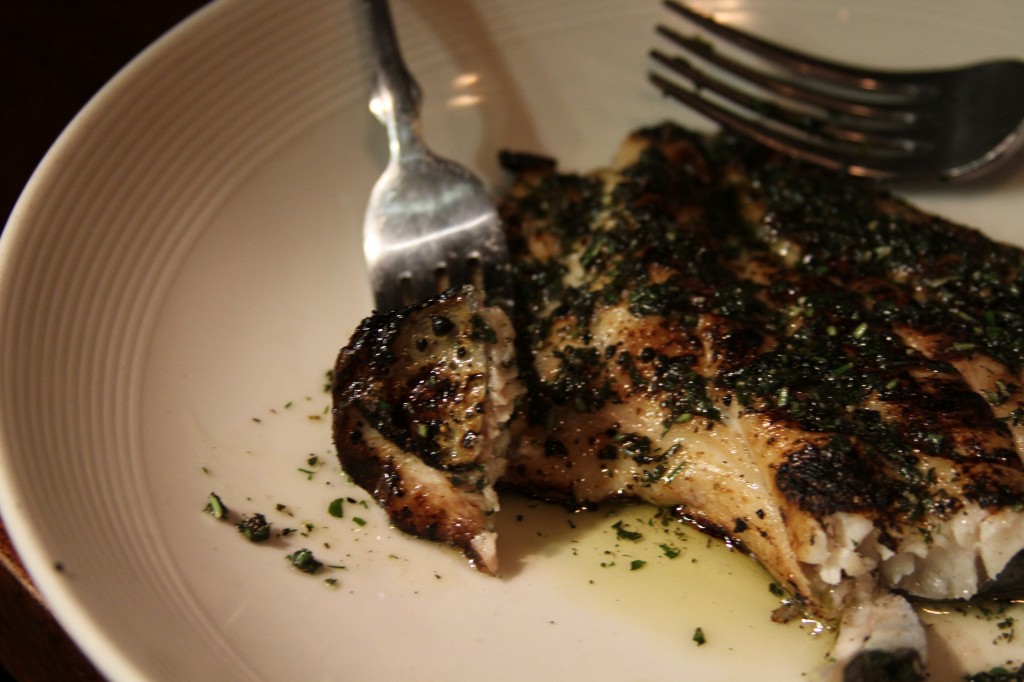 Since I’m a growing boy and getting some green stuff in the old diet is important, I also busted out a super quick grilled salad with an easy variation on a caesar dressing using grilled lemongrass .  First we gotta hammer out the dressing.  Lemongrass, lemon juice, whole grain mustard, parmesan, black vinegar and rice vinegar, olive oil and sesame oil, two egg yolks, garlic, and fresh mint (see, I told you I loved mint).  First thing to do is grill the lemongrass. 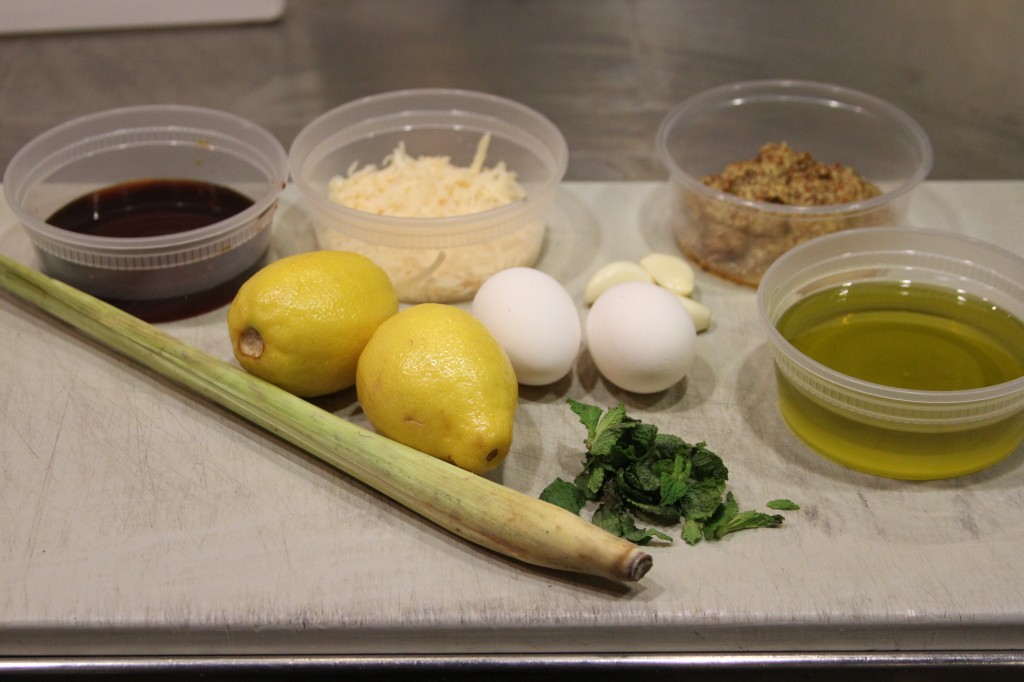 Lemongrass is tricky.  It’s tough and stringy and unpleasant if you don’t treat it right, but once you get on top of it, it will submit pretty easily. Take the whole stalk and bash it against the edge of a countertop a few times or until you can smell the lemony goodness. You can also smack it with the back of a heavy knife. Once the lemongrass is good and roughed up throw it down on the flame for about a minute on each side. 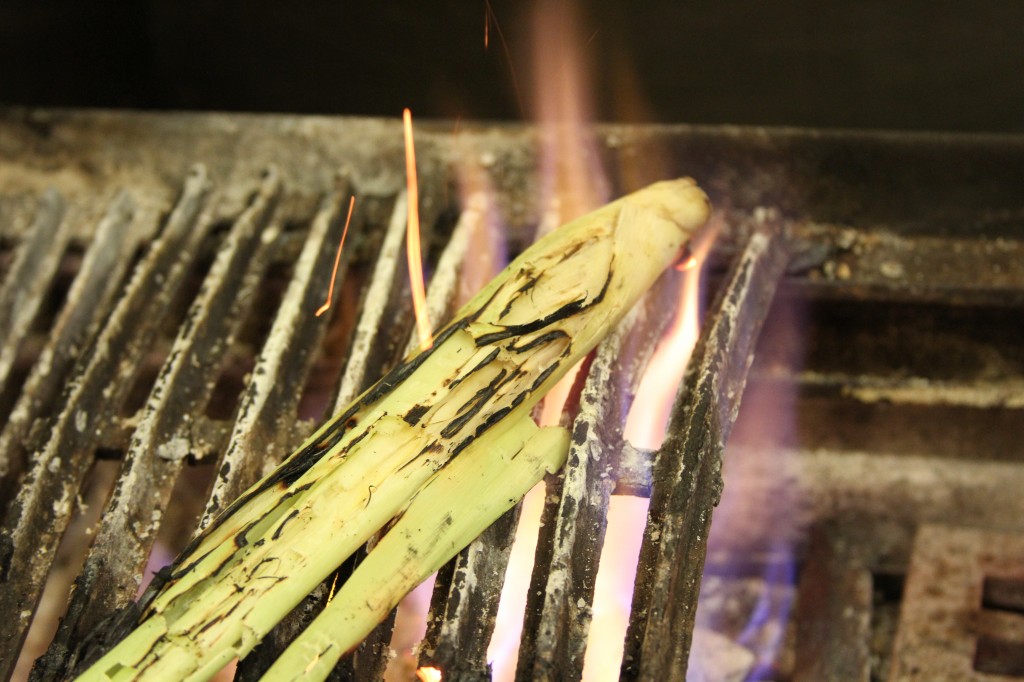 Look for a little char and sizzle then pull the lemongrass grass and transfer it back to the cutting board.  Once there do yourself a favor and get a pretty fine a chop on the lemongrass.  It will cut down on the amount of time it takes to blend the dressing. Drop the lemongrass into a blender once it’s chopped along with the yolks, two tablespoons mustard,  juice from one lemon, three cloves garlic, and three tablespoons-ish of the mixed vinegars. 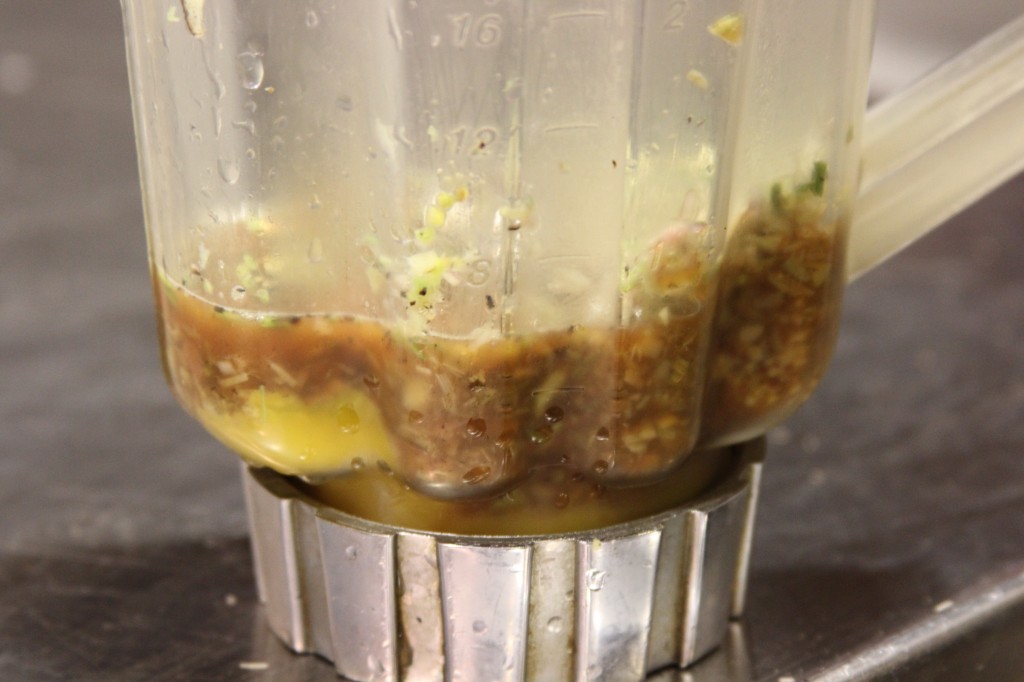 Everyone into the pool!

Once you’ve got that sweet little crucible all loaded up, let her rip and watch it blend.  Once everything is swirling at a nice even consistency drizzle the oil slowly into the mix and let the blender do its thing and get a nice emulsion going.  Once you achieve that nice creamy look start adding the cheese.  This part is purely up to you, but you can be fairly liberal with how much cheese you add. It will serve to thicken the dressing and hold it together when we “butter” the salad. The dressing is ready when it’s  tight enough to evenly coat and stick to a spoon. 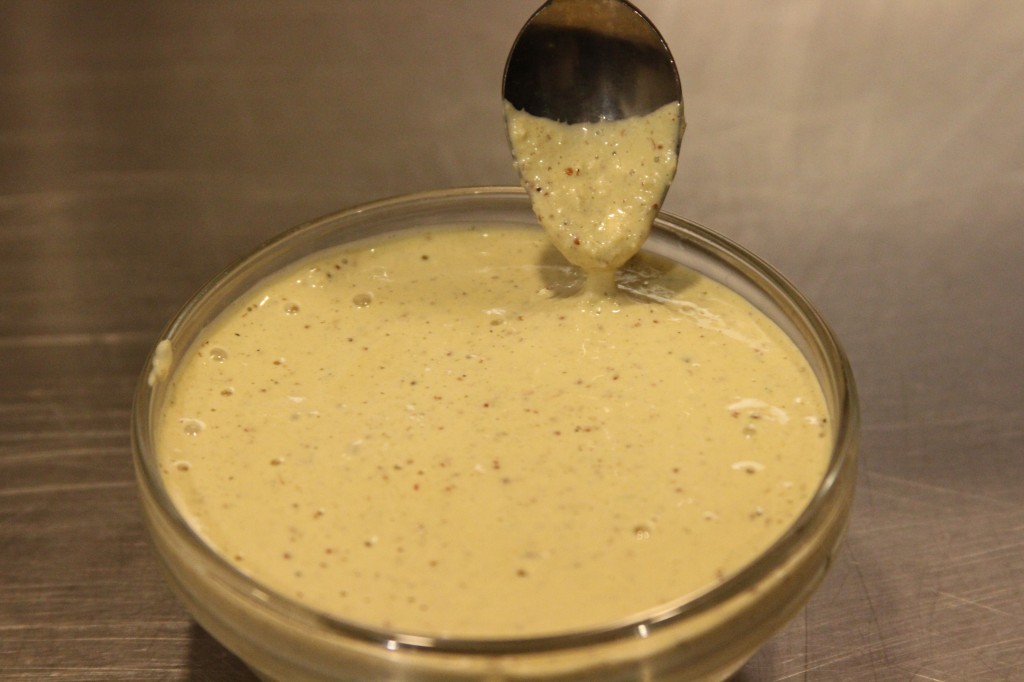 Produce time.  Take a whole head of romaine, split it lengthwise, and lay it heartside down on the flame. 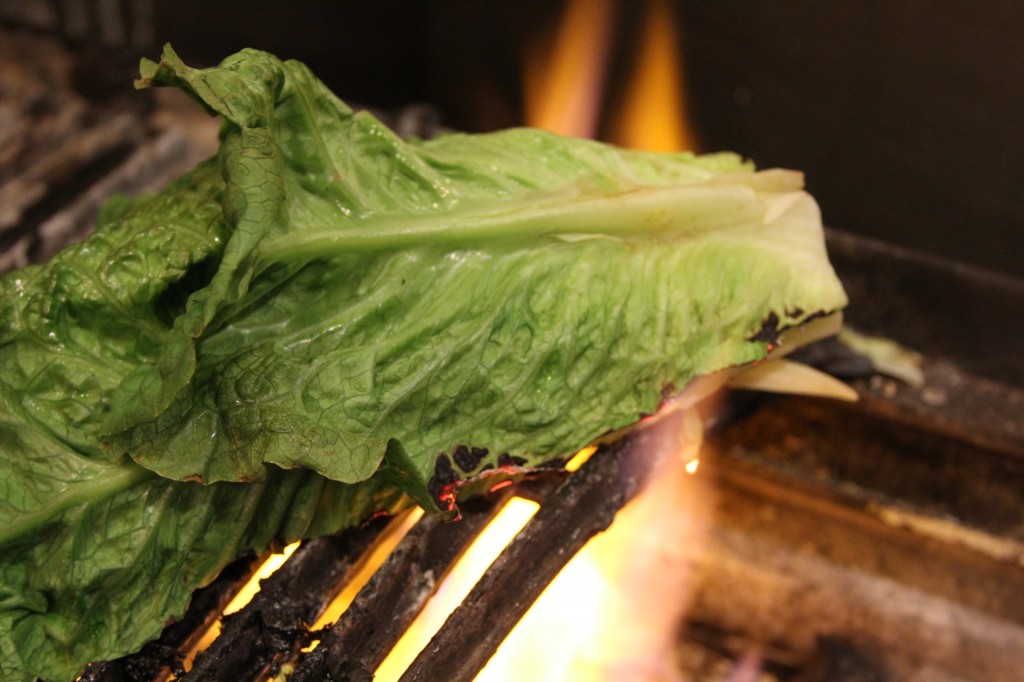 Let the lettuce hang tight there for a couple of minutes at most.  The heart will take a nice char, the outer leaves will wilt slightly, and the inside of the lettuce head will soften just so.  Textures will abound.  When it’s ready place that bad boy charside up. 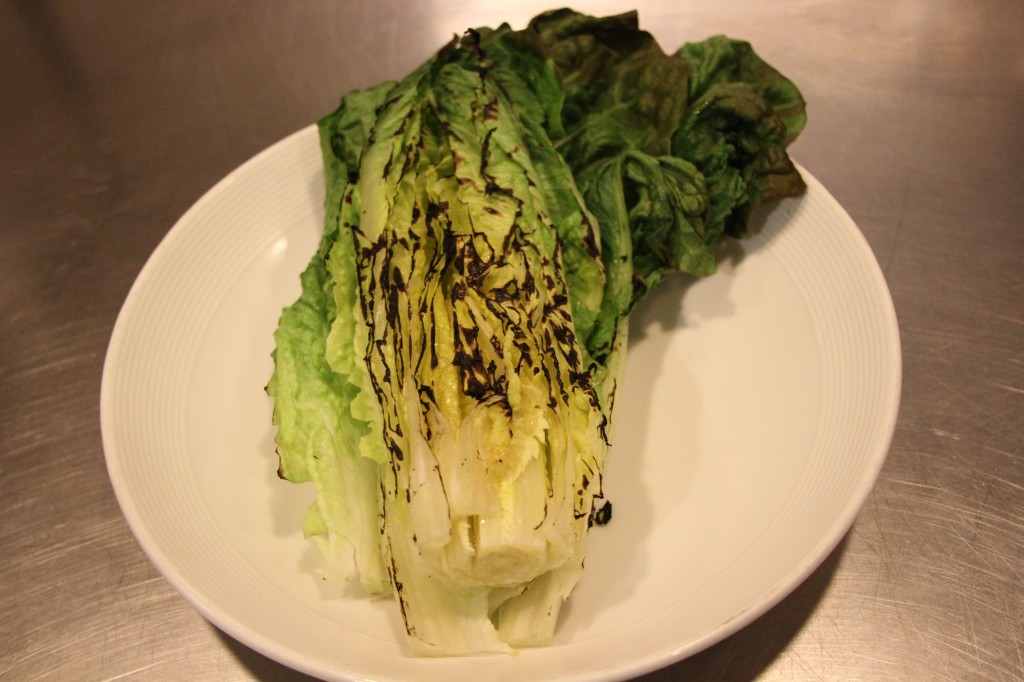 The move now is to take the lemongrass dressing and butter it all over the smoking, charred face of the lettuce.  The heat is gonna start to break the dressing down ever so slightly and cause the bottom layer to melt and drip down into all those tender crevices hidden inside the lettuce head.  Last thing to do before serving is to chop that fresh mint apply it right to the top of the dressing.  The magic is in the mint. I’m serious. Don’t forget the mint. Don’t do it!

What’s great about the aforementioned food is that it’s short on active cooking and prep time, the ingredient list is small, and it’s relatively easy to manage since the grill fire is doing most of the hard work.  But best of all it works if you’re dining solo, as a pair, or even if you’ve got the entire Burrito Pro Team coming over for dinner.