I made it down to Flamingo to complete my birthday week on the water. I was fishing with my buddy Mario. The objective was to pound the redfish with the long rod. Mario had only caught 2 maybe 3 reds on fly in the past, none over 14″. I told him about the madness that had been going on throughout the week. But he didn’t believe me. 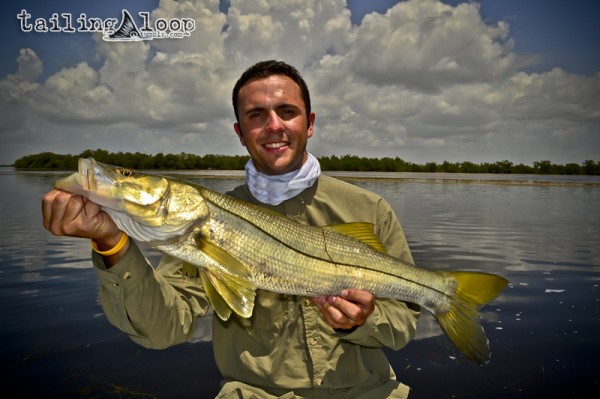 We start off getting some shots at giant schools of black drum. No takers. We pull up to a nice school of tailing reds. Instantly, I hooked up. But the fly came loose. I kept stripping and another one crushed the fly. But it popped me off shortly after. I retied another fly, and we moved on to another school. First cast, instant hook up. But the fish came loose. I recasted into the school with the same results. I was annoyed, and switched up with Mario. So I pulled him up to a school of tails, and we had the same results. So I looked at my fly box in disbelief that I had forgotten to tie up a batch of my magical pattern. But I did find one half ass version of the fly. It was my first attempt at creating the pattern. I said fuck it. Might as well throw it on there and see what happens.

I decide to grab the GoPro’s and start recording. I pole mario to a school of tails and he comes through with his first tailing redfish on fly. He had never seen schools tailing so thick. So we switched up.  Mario poled me up to a school of wakes that was pushing down our way. I put the cast right on the money and instantly hooked up. I noticed it wasn’t peeling line off the reel. Instead, it was just bull dogging. Sure enough, it was not a redfish. It was a black drum. My first one on fly. The wind was starting to calm down. Mario poles me over to some tails, and I nail a red in the boat. This was just a preview of what was to come. By that time, we had double digits in the skiff. But when the sun made it’s way above, the wind died down. Once the flat became a sheet of glass, the tails rose for the occasion.

A mega school formed as far as one could see. It got to the point where we would cast at the school of tails, hook up. Only spooking off a few fish from the school. fight the fish, get it in the boat, release, then switch up. Then pole 20′ ahead and cast another fly into the school for a hook up. This went on for a while. Cast after cast, fish after fish. All before lunch. The wind began to pick up slightly. The school began to spread into a bunch of small schools. And to be completely honest, it had then lost some of the fun. I kind of wanted to do something else. But I didn’t know what else to do. All I do in flamingo is look for redfish. So now, we are getting ready to leave. I am up on the bow, and Mario and I spot a giant school pushing a few hundred yards away. We decided to stick around and see if it made it down our way. As the wake got closer, we realized it just appeared to be one big wake. Once it was in range, I start my cast. When I realize it’s not redfish. It was actually two really nice snook pushing across the flat. I hit the fish on the nose with the fly. But they didn’t seem interested. I picked up and shot my line right back out infront of them. Same result. No interest whatsoever. So I told Mario to make a cast out at them with the spinner. The moment that flappin’ shad hit the water, the smaller fish of the pair inhaled it. Mario got a perfect hook set on the corner of the mouth. All I could think about was the 12lb leader he was using. After a good fight, Mario got him to the skiff. Took a couple pictures, and released the snook back into the water. A quick measurement before letting him go showed him to be 31.5″. Mario’s biggest snook ever. Now we were definitely ready to go. But we still went ahead and picked off a couple more reds before getting off that flat. Made another quick pitstop to try and get some tarpon, but Mario just pulled out another snook. He also hooked into something big while casting at some baby rolling tarpon. But this fish nailed it, then took line at excessive speeds without jumping. It then frayed through the leader. We assume it was another big snook. For that’s what it looked and acted like. I didn’t get many pictures at all. There was way too much action going on to be taking pictures. But we did have the two GoPro’s going. So I will put a little video together. I also have some footage of Mario pounding 6 tarpon and 3 snook on the 5wt from last week out of my Gheenoe highsider. So I will probably include that as well.