Escape From Prison, to Paradise

It had been a long couple of weeks consisting of twelve to sixteen hour work days. In a boat building facility that felt an awful lot like what I imagine prison would feel like. Thankfully, I have never had any run ins with the law. So I don’t know if my thoughts are even close to accurate. All I could think about was getting out to paradise. As the days got closer, I could feel the fly line in my striping hand. But I put up with all of this dirty work consisting of block sanding and painting. For it’ll ultimately lead to more goodies for my addiction.

I managed to somehow weasel my way into getting three days off in the middle of the contract we were on at work. So on the first day, I met up with my good friends Ryan Masih Das and Warren Chin for a trip to Flamingo. We made our routine pit stop at Don’s Bait and Tackle to talk trash with Ashley and grab some ice.
We continued on our trek to the park. Once on the water, we saw that there was absolutely no water on the flats. There was a morning low, with a strong north wind pushing all the water off the flats. We managed to find several schools of fish. Some were very sketchy and would dart off at first sight. We found some giants laid up that were not willing to eat. And we also found a share of overly aggressive smaller guys in the potholes. We knew this day wasn’t going to be a big numbers day because of the conditions, but we were okay with that. Because while others were off in the creeks and the coast shrimp fishing, we were out front in the skinny in a poling skiff chasing fish. Doing what we love. Rather than tossing shrimp at shorelines and creek mouth catching 86 rat reds.
I cannot remember the exact amount of fish caught, but it was nothing to brag about. Some slot reds and a few large trout. It was a very foggy morning. 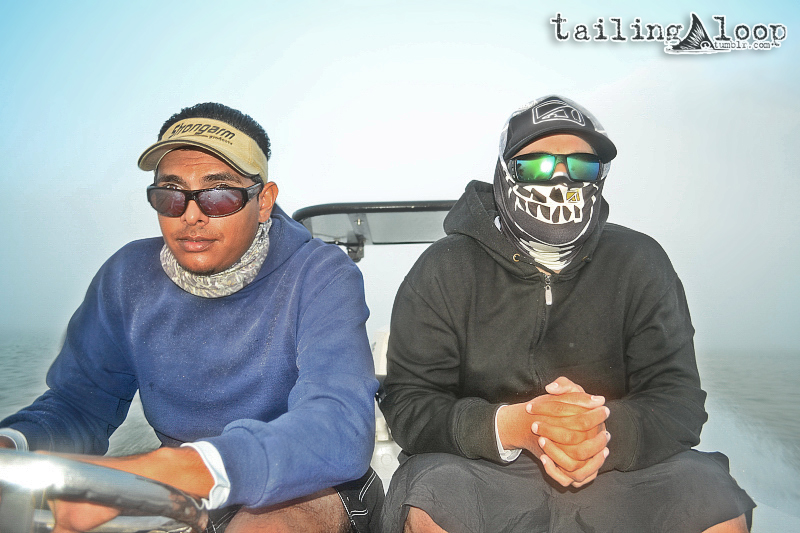 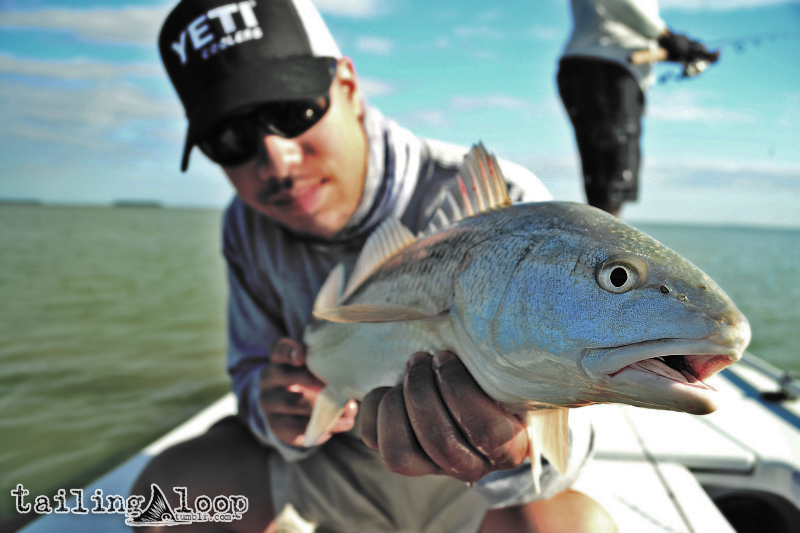 Day two on the water, was a different story. I hitched up my 2012 Ankona Copperhead Tournament Series “Gen Two” and was on my way. I was headed to the park with a buddy who had never really done any flats fishing. I had put him on his first redfish a couple weeks before, but it was a single tailer. He then switched up with his buddy that blew shot after shot at tailing reds to finally catch one at the end of the day. So on this day, he was looking to put a whooping on the reds.
We made it out to the park after the daily morning routine. We were welcomed to the water by slick glass conditions. I idled up to the first spot and jumped on the poling platform. And like clock work, there was school after school, after school, of redfish. These were all mid to upper slot fat fish that were ready to inhale anything in their path. Right off rip, I had three good sized reds to the skiff off of the poling platform. But Mike was having a hard time off the bow. He had never seen so many redfish in his life. Heck, I hadn’t seen that many redfish since summer 2010. Let’s just say Mike was a bit nervous to say the least. I backed off the casting to give him full opportunity at all the schools. But school after school, hour after hour, it wasn’t happening. Every now and then, I’d make a cast into a school, and hook up instantly. I would make a cast just to make sure they were still eating. I don’t know what Mike was doing wrong. Sometimes his casts were way off. Other casts were placed perfectly and just wouldn’t get an eat. But every cast I made, was a redfish to the skiff. I guess that’s a lot to put onto a rookie on the flats. I noticed the schools began to come by in waves. about ten schools at a time, at least 40 fish in each. I told mike the fish were getting off of the flat with the falling tide. That he would have more shots at the same fish once the tide turned on their trek back onto the flat. Just at the end of the falling tide, insanity broke loose. Schools came from everywhere. I would probably not even call it schools. It was like Universities of redfish. (lol) But those were small fish. All in the twenty one inch range. But yet he still couldn’t capitalize. And like the flip of a switch, the flat was a ghost town. We staked out for lunch to wait for these fish to come back in. But nothing was happening. I was pretty confident that they would return, though. For I always targeted them that way throughout 2010. But in 2011, the fish had a completely different pattern. So I started to second guess myself. I decided to run off to another spot to see if anybody was home, but I didn’t see anything. At this point, my good buddy Ryan Masih Das and Joey “Flats” Reyes showed up in the other Copperhead. I decided to listen to my gut feeling and go back to the spot from earlier. I told Ryan to follow me if he’d like, and he did. We arrive at the spot and everyone is second guessing my decision to return. I told them to just wait for it that they were bound to show up. We were standing on the platforms holding still with the push pole as I scanned across the flat. Ryan made a comment about he remembers the times of seeing large schools of fish. I replied saying “I remember poling to schools of redfish like that one over there a few hundred yards away and catching fish.” as I pointed across the large flat to a large school. No one had yet to notice the school as I began to chase the school. They thought I was just messing with them. But sure enough, I cut off the very large school of fish in a few minutes. Luckily they were heading in a direction that I had a perfect angle to intersect. Otherwise with that distance it would have been almost impossible. I got into range and I told Mike to make a cast. He hesitated, so I made a shot. He came behind and landed right on the school; breaking it up into a bunch of smaller schools. The fish started heading right toward Ryan’s skiff. So back another 100 yards after these fish toward Ryan I go. Quickly Ryan got a fish to the skiff. Then I followed with catching another one myself. But Mike wasn’t fortunate enough to get a hold of one. He had a few eats that he lost on his Bass Masters Classic style hook set. At that point I put my rod away and was focused on getting Mike at least one fish for the day. As Ryan and Joey were doubling up just 70 yards away. We were right in the path of all these schools of fish. Wave after wave, school after school. It still ended up with the same result. By this point, it was pretty late in the afternoon. So Mike decided to admit defeat, and we were on our way back in. I was not happy with the end result. I caught a bunch of fish myself, but my angler was skunked. Something I don’t enjoy, really. So someday soon, I’ll back at it with Mike trying to get him some redemption. 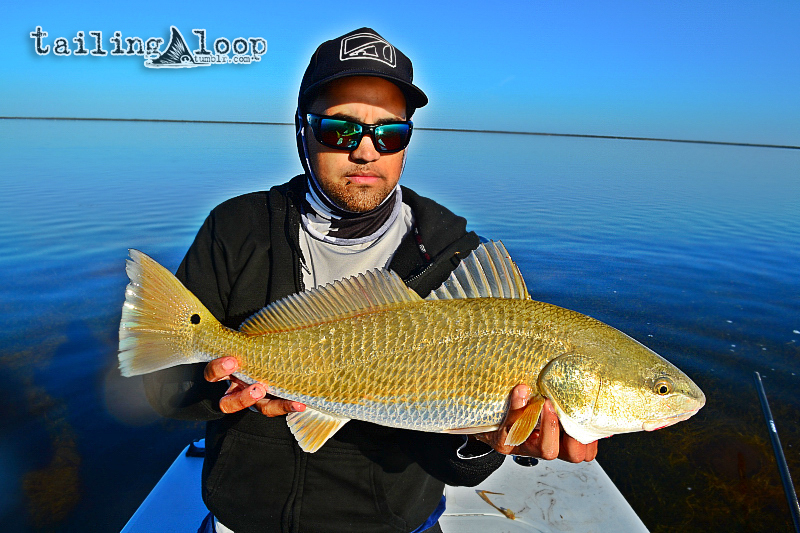 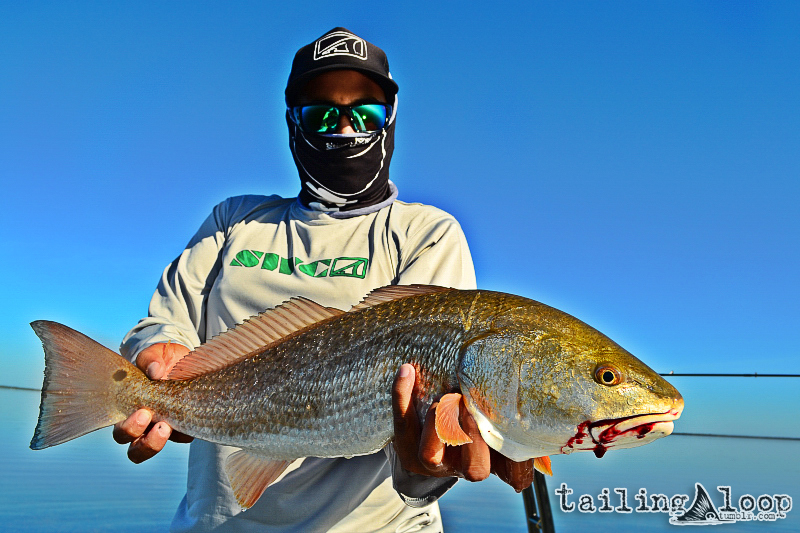 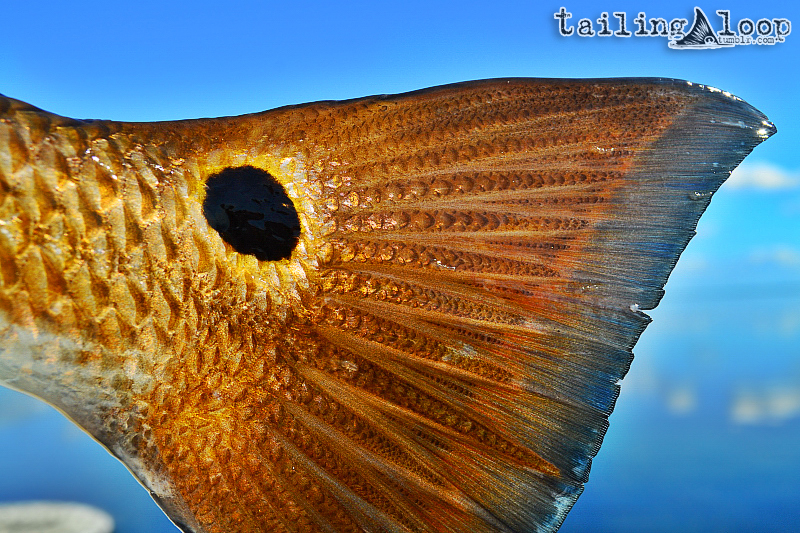 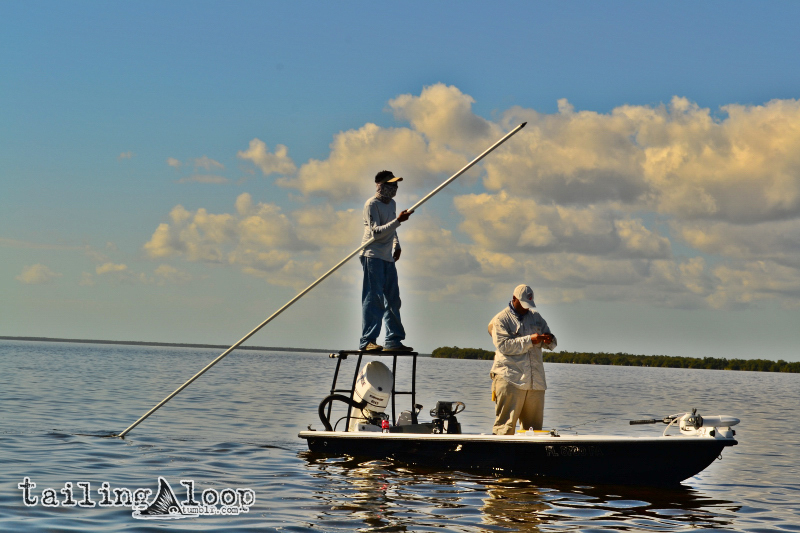 The following day, I was back in the park with a buddy Dave Preston. Aboard his East Cape Caimen. The objective was to poke around the back country looking for giant silver acrobatic fish. Finally, a day that I will get some bow time with a fly rod in my hand. If only it could be that way every weekend. The temperature was a little cooler than we had expected for the morning. So we decided to mess around the back bays looking for redfish until the sun was up high. We hit a couple spots that we know hold a few fish. In tight quarters, in less than a foot of crystal clear water. I was first on the bow. I made a few shots with no eats. I was leading the fish by about 4 feet, as I would out front on the grass flats. But Dave kept repeating to lead them by at least 10 feet and allow them to come up to the fly before giving it a twitch. But for some reason, I couldn’t process that in my mind. I’m used to putting the fly four feet in front of the fish. So after a few shots that fish just swam right on by, I asked Dave to switch up. Let him break the ice. That way I can observe from the poling platform. He had a few shots with no takers as well. But out the corner of my eye, I spotted a fish coming out of the shoreline out to the mud. I pointed it out to him, and he made a perfect cast. The fish crushed his fly instantly and it was on. Got him in for a picture, but all the commotion spooked out every fish in the pond. So we were off to pond number two. This was one of my spots, so I knew where to expect the fish. Within a few minutes, Dave pointed out a fish that I could barely see due to the glare of the sun. I dropped the fly in the general area and noticed the fish move. Once the fish moved, I spotted it perfectly. I saw what it was doing and recasted. The moment my fly hit the water, it was in the mouth of the red. After a short fight and picture, the sun seemed about right. We were off to our actual mission. I noticed something in an area that Dave said to keep an eye out, and sure enough someone was home. We didn’t manage to get any of those into the skiff. But Dave did get two out of the water on the strike. The clouds came, the winds picked up; and the fish didn’t show again. 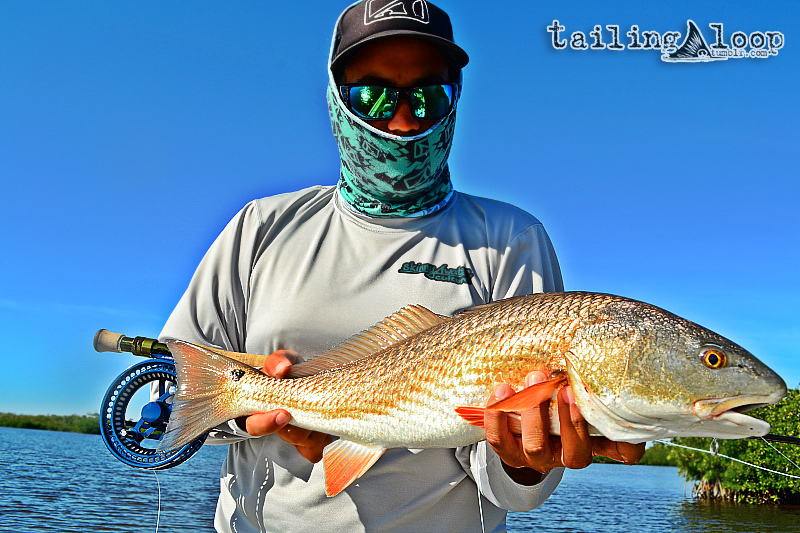