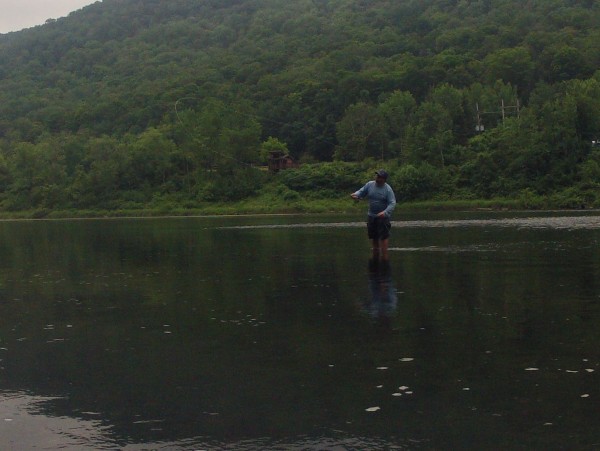 I am a saltwater guy, you know this. But I finally got a chance to hunt some Native Trout, Rainbow Trout and Carp. I drove south from Western NY into Pennsylvania for 2 days. We started the first day at the Kinzua Dam and fished our way down-river for Northern Pike, Smallmouth and Trout.

The fishing near the dam was pretty slow but the further we got from it, the warmer the water got, and hotter the fishing. Smallmouth  were plentiful around downed trees and rocks. One nice Pike took a Musky lure along with a few smaller ones. 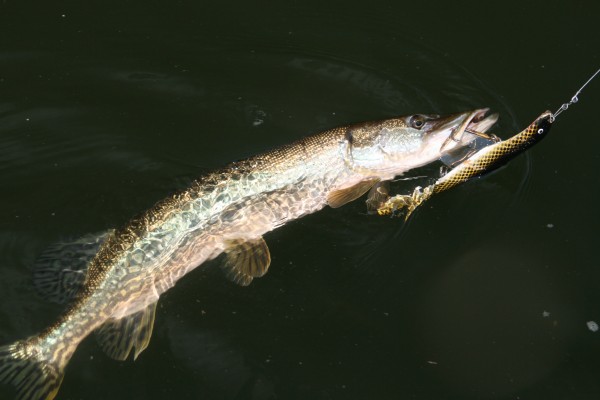 The Trout were scarce but as we rounded a bend in the river, there were a few houses on shore with some nice “hills” or what us Florida folks would call mountains rising steeply behind them. Then we saw them, we had spotted a few earlier but only one at a time, Carp and big ones in some thick grass. I tied on a fly I thought would work and made cast after cast, no dice. I changed flies a few times until I had one I use for Redfish on the end of the tippet. I don’t know if its was the pattern or the absolute perfect position of the fly but finally a good size Carp sucked in the hook and took off. 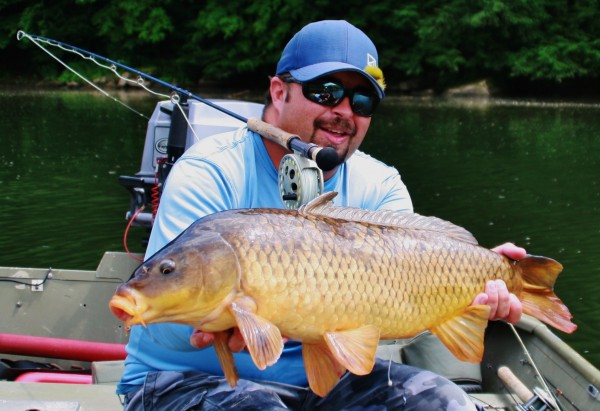 This guy took me all the way across the river and damn close to breaking me off on some rocks over there. He was a great fight on the 7wt! With backing showing I had some work to do. We did try a few more drifts over these fish after landing this one, but they had us figured out by then and just spooked at the sight of every cast. Reminds me of some other fish I know.  After some more Smallies and a nice strike from a huge Musky we called it a day. 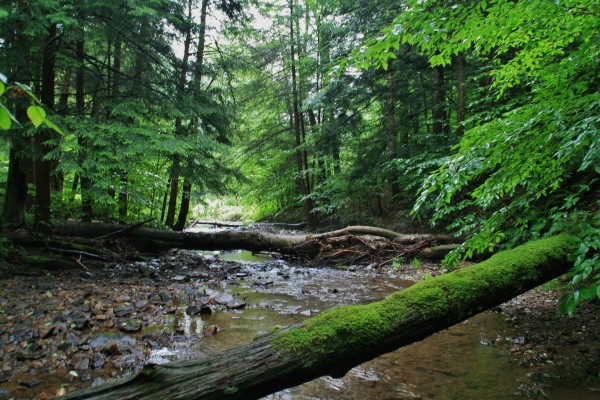 The next day Trout was the main focus. We hit some creeks close to the road and a few not-so close to the road. Some hiking was involved and with a little chill in the air after a morning rain, it was awesome. I haven’t had the chance to be back in the woods in a while and this was refreshing. 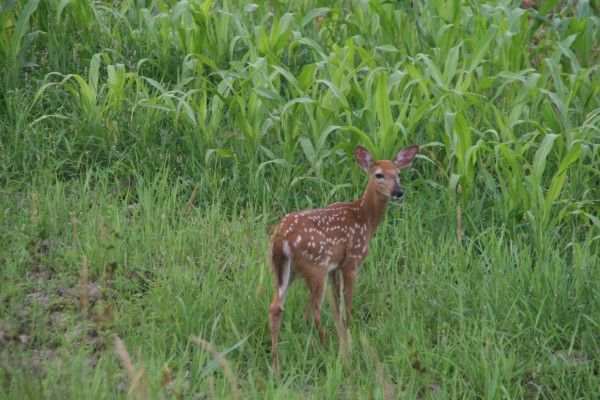 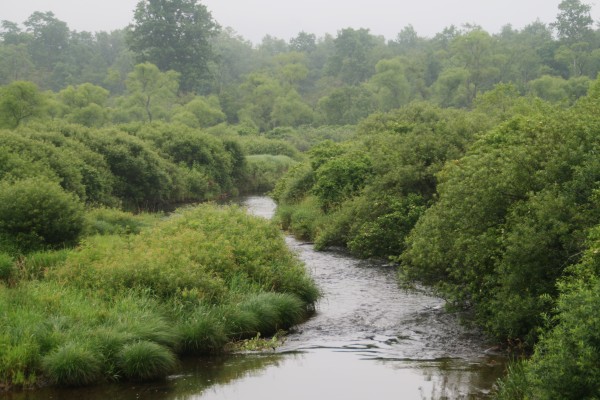 After some searching we did find a few pools to cast into and search for some fish. The current made it very different from my normal situations and the challenge was fun. A VERY accurate, although usually short, cast is a must. The trees behind you really like flies also. 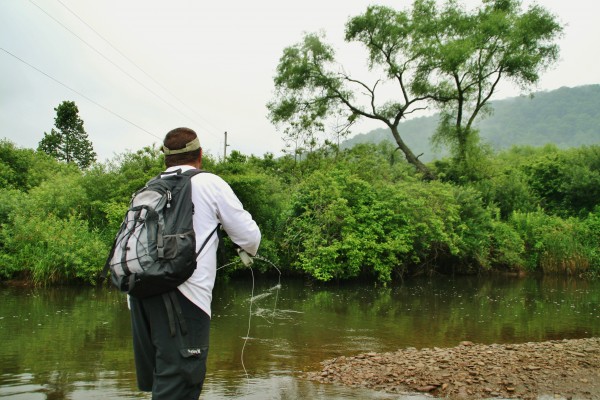 Casting tight to the shadows!

After one fish struck in a nice pool and came off when I tried to strip-strike, I had to remember the set my freshwater anglers misuse in the salt. TROUT SET!

Well luckily I got another chance and SUCCESS! A nice fight and a few jumps and I had my first Rainbow. They are very cool looking on tv and in pictures but nothing like how they look after miles of hiking in search for them. Worth it all. 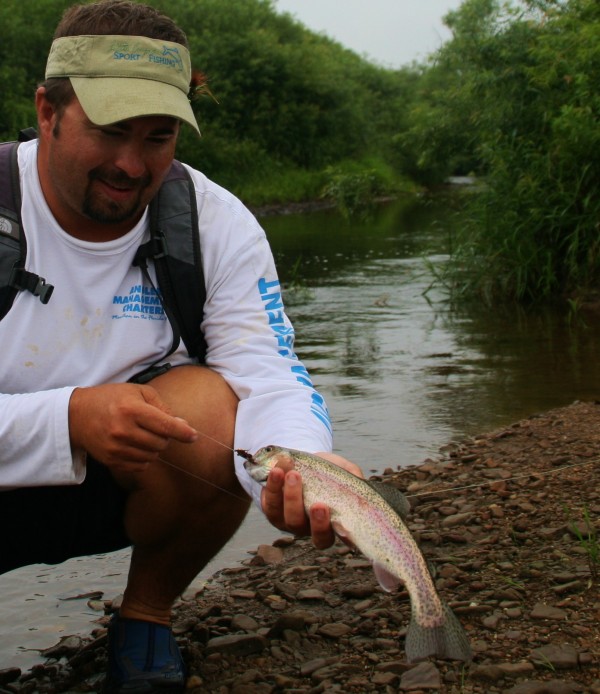 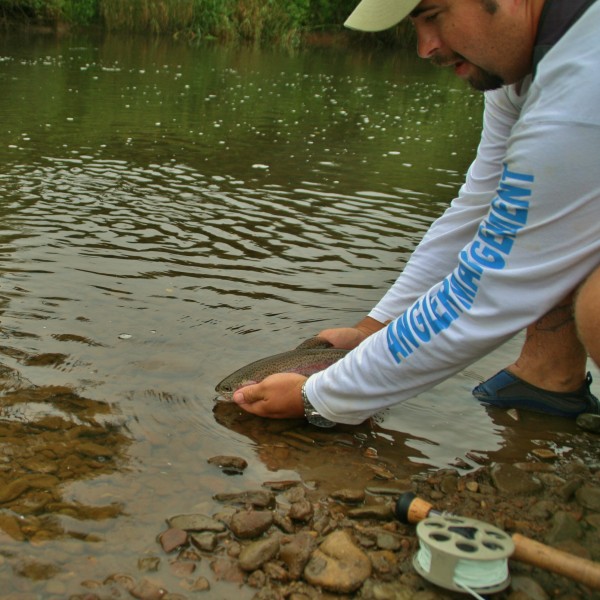 After some quick pics I let the fish slide away back into his creek bend. It’s an amazing sport that can keep you learning completely new techniques over the years. Then add the many many new species of fish that, no matter the size, can humble any “long rod athlete”. It amounts to tons of memorable experiences, travels and new friends. So in short, I did really enjoy the “sweet-water” fishing and I didn’t have to rinse off the gear afterward!