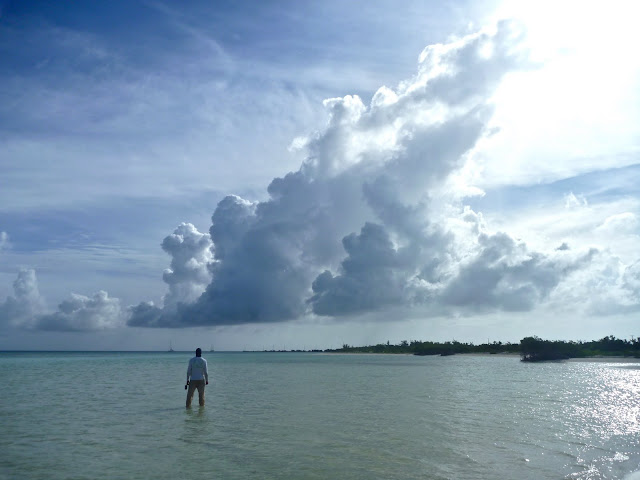 Morning of day four, we awoke to a passing squall that spit rain into the tent and made anymore sleep impossible as high winds ripped across the tent. It was the beginning of a day filled with passing storms and wind that refused to die down, making the fishing challenging. Despite the wind, my brother and I decided to take the pontoons out and drift farther out along the coast. Adam dropped us off near the mangroves and we rigged up multiple rods for bones, perm, tarpon, and barracuda, just in case. It didn’t take us long to realize a major problem. Rather than having the wind come from the East drifting us along the coast, it was coming from the Northeast pushing us out to sea. After drifting a few hundred yards, we decided to head back to shore. Matt decided to row, while I found it futile. I hopped out of the pontoon into chest deep water and preceded to walk it back to shore. It took quite a long time as we drifted farther out than we did down the coast. We decided to follow Adam as he waded alone in the distance. 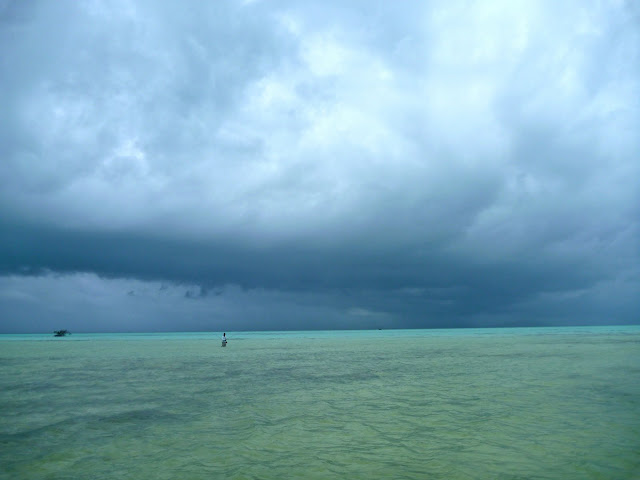 After only mere minutes, Matt shouted out, Permit! Under heavy cloud cover, it revealed itself only by going face down and tail up. Matt shot off a cast but the permit turned in my general direction. I couldn’t see anything under the heavy glare and Matt shouted at me to make a cast. I hesitated because I couldn’t see, but in the end decided to trust my brother. Following the directions of 20 ft. at 1 o’clock, I laid out a merkin styled crab with a rattle, stripped twice and paused. As I stopped, the fifteen pound permit swam perpendicular to my viewpoint finally showing himself in a lane of visibility. I re-casted and stripped. The body language of the permit changed suddenly and he was on the fly. After each of the next two strips, the permit zigged and zagged to keep an eye on my fly. I stopped, and my crab settled onto the bottom. Ten feet from my rod tip, the permit descended upon the crab in slow motion, while my heart raced. He angled downward for the feed and still I waited, my heart in my throat. I set the hook, but it was not to be. I set too soon. I exhaled deeply, adrenaline coursing through my veins. My only chance at glory darted off the flat and into the glare, never to be seen again. I was left with the fine line between a take and an inspection replaying in my mind.
As the image of the permit lingered in my mind, my brother and I shuffled down the flat looking for any sign of fish. The wind and heavy cloud cover made this the most difficult day of fishing on our sojourn. The lone fish came as I spotted a very large bonefish cruising between a small mangrove and an abandoned lobster trap. Moving perpendicular to the shoreline, I easily spotted his frame. I made my cast and watched him close in on my fly. I stripped tight to a fish that I expected to be the big guy, but it wasn’t. A second fish, much smaller, that I hadn’t seen took the fly and the two bones took off. I landed the good fish, explaining to Matt what could have been, if the larger fish was a little quicker to the fly. 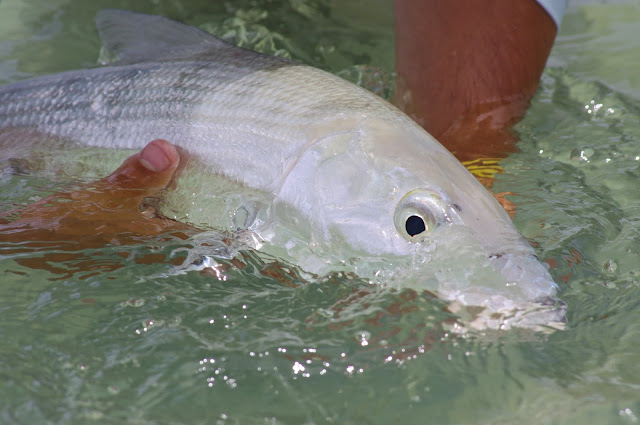 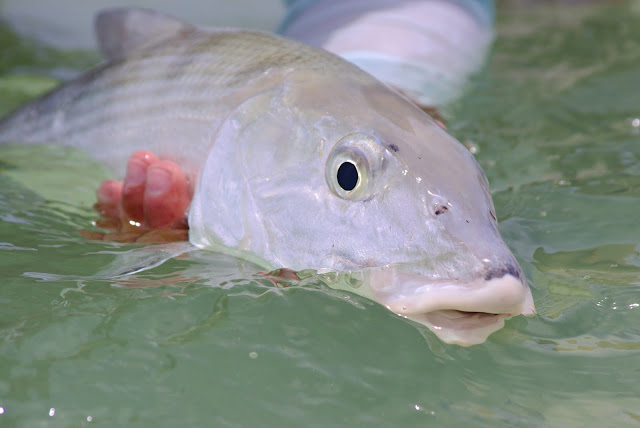 Meeting back up, Adam experienced a fishless shuffle as he zig-zagged his way down the flat trying to cover as much water as possible. At one moment, he turned around to find a huge permit swimming right by him. They made eye contact and the fish was gone. We made our way back to the beaches hoping to increase our chances of seeing fish in skinny water. In between passing clouds we had two solid chances at very large fish. One of them proving successful. 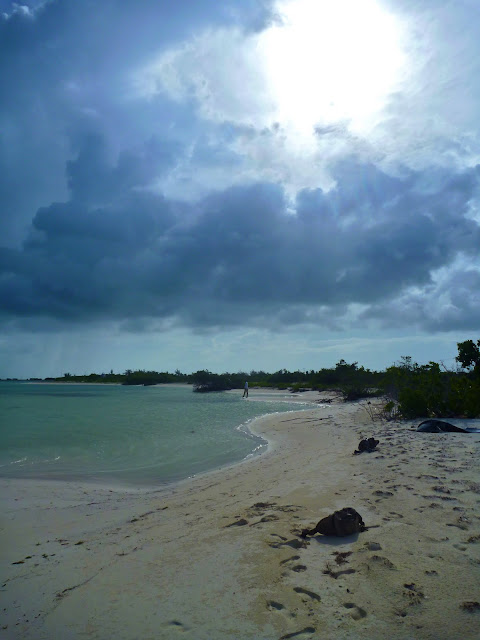 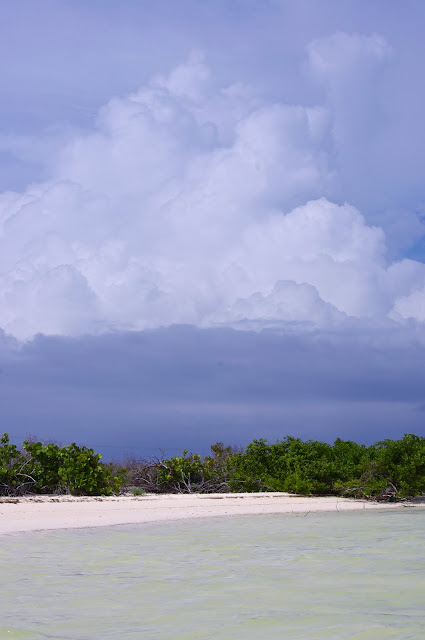 Heading down the beach, I heard a loud splash. Naturally I scanned the horizon looking for the wrath of a passing barracuda but didn’t see anything. Coming around the side of a mangrove I saw the what was making all the commotion. I large tail was sticking out of the surf surrounded by a column of mud and sand. Emerging from it came a large bonefish at my 12 o’clock. I aimed towards 10, let my line go and the wind carried it to the right my leader landing directly overtop the back of the fish. At the same moment, he went down for another meal, my leader safely descending to the bottom just beyond his tail. When he popped his head out of another cloud, I stripped twice. He aggressively turned over ninety degrees for the fly and I was treated to the longest backing run I have ever experienced that prompted me to actually look to make sure I had backing left. It was the heaviest bonefish I have ever caught. 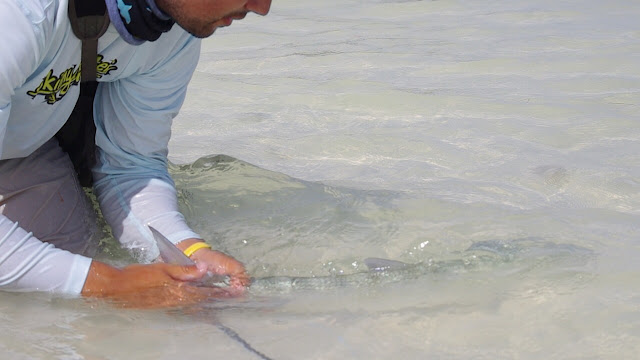 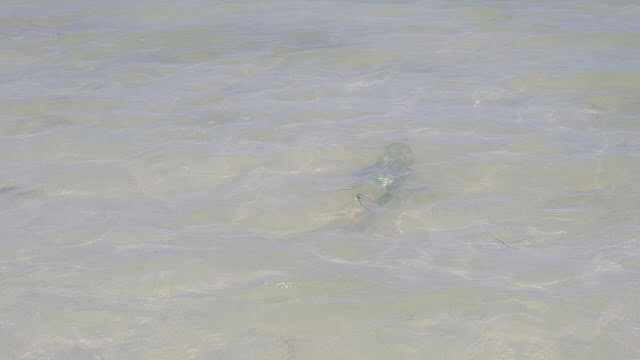 With low tide peeking, the fishing screeched to a grinding hault. We headed to our rendezvous on the dock where we waited out a few storms and caught some sleep on the dock. We repaired wading wounds on our feet, ate some catered ravioli from a can, and watched the sunset. Halfway through the trip, we were beginning to experience some heavy fatigue. However, something was about to happen that was going to wake us all up. 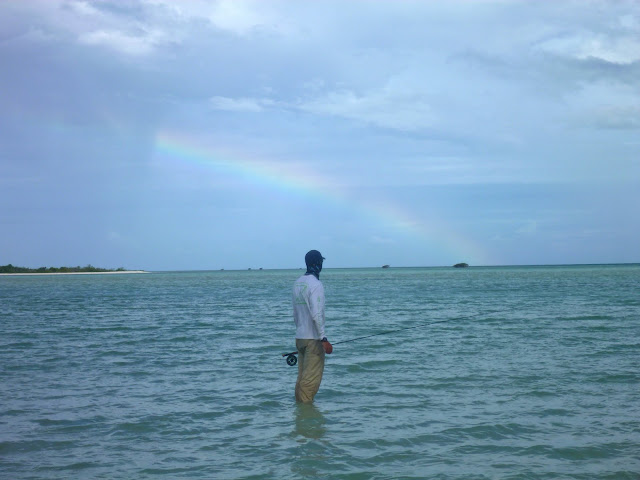 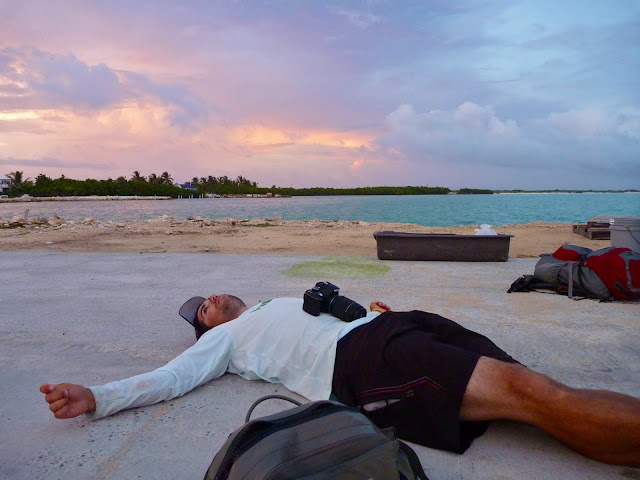