With tarpon season comes several things, one of which is constantly tweaking the flies that you use. It never fails that the flies that were working great last year need some kind of adjustment that forces us to tie new ones. It is possible that the fish don’t really care, but as an angler we feel that we must change them up. 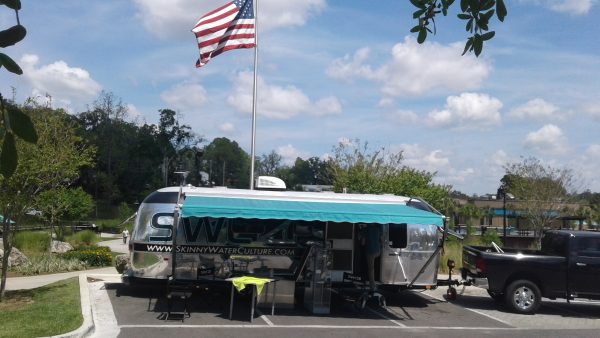 The SWC airstream. Coming to an event near you!

I was sitting at the Skinny Water Culture airstream in Tallahassee a couple of weeks ago for the Now or Neverglades Sport Fishing Day talking with a couple other guys about tarpon fishing.  A representative from Owner Hooks walked up and started up a conversation with me. He showed me a heavy hook with a welded ring attached to the eye.

This was very intriguing to me because I immediately though of a location where I frequently fish that has very strong tidal movement. Because of the strong currents it provides a constant struggle to get a fly down 12 inches or so to the zone where the fish like to feed.

In the past, I have wrapped lead around the shank of the hook to get the weight I was looking for; the main problem with this is that the first fish to get hooked almost always messed up my lead wraps.  I took the pack of Mustad 2/O Hoodlum 4x Strong live bait hooks and stuck them in my pocket with the thought of tying something slightly different. 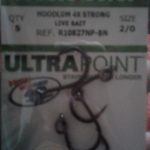 My creation had a purple marabou tail with black EP body.  I typically like to keep my flies simple, flies with tons of materials often catch anglers but I don’t believe they are usually any better at catching fish.

I attached the marabou to the shank of the hook right where the bend starts, then tied in my EP wire brush and advanced the thread.  I wrapped on enough brush to mostly fill the shank up to just before the eye.  A dab of superglue to keep the whip finish in place and I was ready to give them a try. 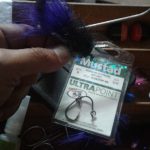 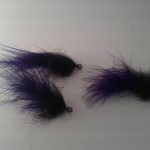 Now that I had finished tying, I had four new flies and no plans to get out for the next three days.  An hour or so later my buddy Jose Chavez from 13 Fishing shoots me a text and says he is dumping his boat about 11:30 tonight and is going to chase tarpon on the lights for a few hours.

I put the phone back in my pocket and approach my wife, “Um honey.”  She instantly replies with, “Let me guess, you’re going fishing tonight.” Tis the season!

I arrived at the ramp as Jose was launching his Dragonfly skiff.  We hadn’t fished together in a while, but both knew it would be going down tonight if the weather would just cooperate.

The weather did cooperate, we got out and there was a light chop on the water and little to no moon visible. I showed him the fly I had tied and he was a little skeptical, but when it was my turn on the bow it only took a couple presentations and I had contact with a fish.  As with most tarpon eats, it was violent and explosive as the fish realized the small morsel he had just inhaled was laced with a sharp steel point. 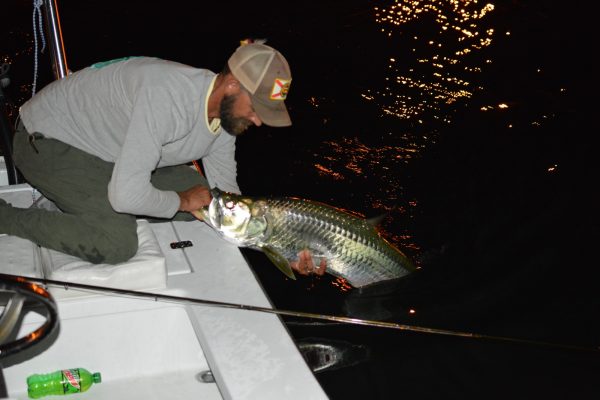 This was a smaller fish, but a tarpon of any size is more than a handful around structure.  We managed to maneuver the fish and the skiff away from the structure and get the fish boat side for a few pictures.

The fly was a success; in fact, it was buried deep into the top of the fishes lip! I will definitely be tying another batch of these guys because I fully intend on losing the rest of them on tonight’s trip.

The moral of this story is to go with what you know works, but don’t be afraid to think outside the box. You never know, it just might pay off.