After the events soon to be described had transpired, our captain Arturo told us a story of one of his long-term clients from the states.  This man had fished with Arturo once a year for the past 7 years.  In that time, he landed exactly one single solitary roosterfish.  Judging by the day we had, he was either an absurd outlier, beset by unspeakable bad luck or just an awful fisherman.  Arturo told us of this poor guy to put into perspective the feat our dad pulled off earlier that day.

By this point in the morning, my father had landed a rooster using live bait, and Mark and I both landed roosters on the fly, as well as Mark’s dorado on fly.  It was our father’s turn at the transom and he opted to try the fly rod instead of the live bait.

Now, our dad fishes with us when we’re all around, but doesn’t get out enough to have developed really strong or accurate casting.  When he has the time, he chooses the fairways instead of the freestones.  Mark and I were both thinking that his chances weren’t too good because of the amount of line that must be kept airborne while false casting, and the accuracy needed to complete a proper bait and switch.  We also both knew that he always seems to surprise us with some strangely cooperative fish. 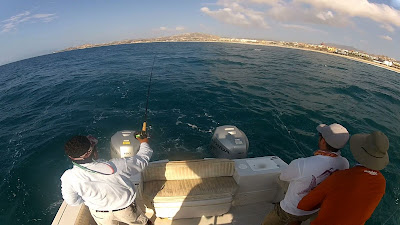 When I hooked the last fish, it was noted that there were others in the vicinity.  Hoping they were still around, our dad wasted no time as he stood with rod in hand as I released mine.  He made one lazy forward roll cast to prep for his first back cast.  As the line and fly lay in the water not 10ft off the outboards, Mark and I were giving him some last-second advice on the double-haul, strip setting and the angle of rod, as if it would make a difference at this point.  Then, the unexpected happened.

While Mark was in the midst of an abbreviated dissertation on the finer points of line management immediately preceding a strip set, a rooster’s comb slashed through the surface and grabbed the fly that was listlessly drifting besides the boat.

Our dad understandably lifted the rod as if a brookie had sipped an Adams.  I grabbed the rod at the first ferrule and pulled it back down into line with the fish as Mark pretty much strip set for him from the slack line at his feet.  Then, a momentary hint of tension and the line went slack, but either the same fish didn’t taste the steel or another one came up in its wake, because it was there and Mark and I, as well as Arturo, were shouting out excited commands that probably just jumbled into garbled madness. 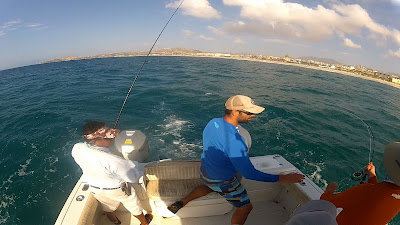 It was a comedy of errors as three sets of hands when to work untangling deck knots, angling a rod, shouting advice and pointing at a striped fish that was not going to be denied.  The line came tight and this time I didn’t let him lift the rod.  He strip set into the fish and the hook buried deep in its lip.

We were all laughing and slapping each other on the back as Arturo proclaimed our dad the luckiest man alive.  He landed the fish and we posed for a few pictures to record another unforgettable fish.  It was not the largest fish of the trip, but definitely the sweetest. 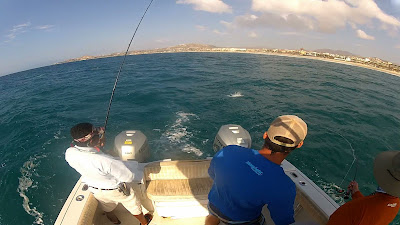 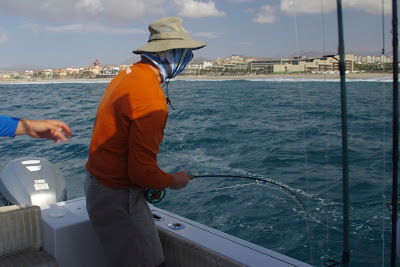 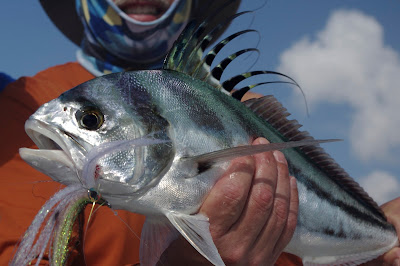 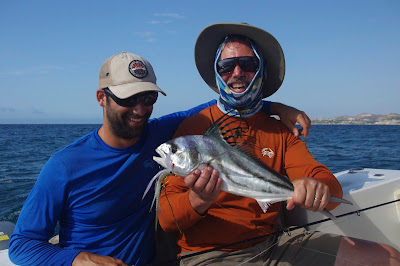