Andros is where the heart is…

Wow…I really don’t know where to start this. Got back from Andros this past Sat night after a week of 12 hour days full of fishing. I think the best way is to go day by day. Click on any picture to make it larger. 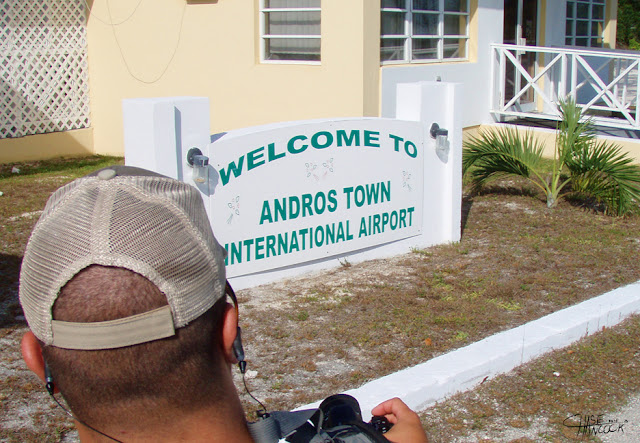 Met Linden the taxi man and 30 mins later we arrived at Mt. Pleasant Lodge, waded about a quarter mile and found our first school, hooked up and before 7:15 I had landed the first and shortly after the second bone of the trip. Talk about an awesome way to start off the trip. 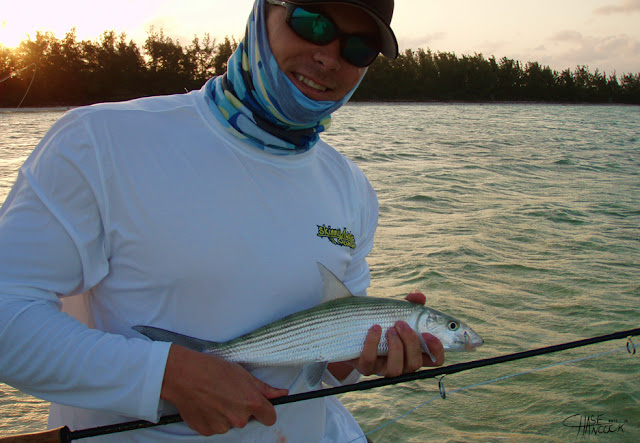 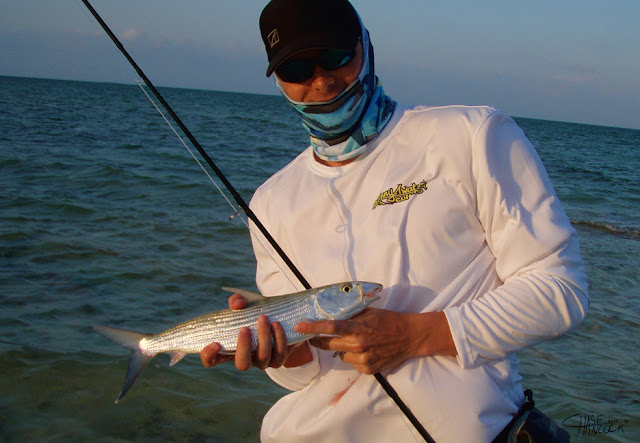 That night miss Stacey made us some fried grouper, cole slaw and Bahamian rice. It was awesomely good.
Tuesday – Meet Solly the Wise
Woke up at 6:30 had a quick breakfast and took the short drive to the ramp at Cargill Creek. Met our guide Solly and we were off for the first day on the boat. I was pretty excited and had no idea what to expect. I was setting out of the famous Cargill Creek, headed into the world famous North Bite and minutes away from the Bang Bang Club were Charlie was probably sitting on the dock. The winds were strong out of the east but it didn’t matter, I was confident. 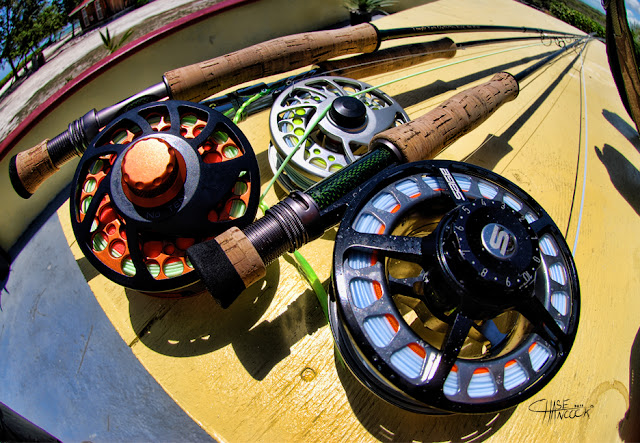 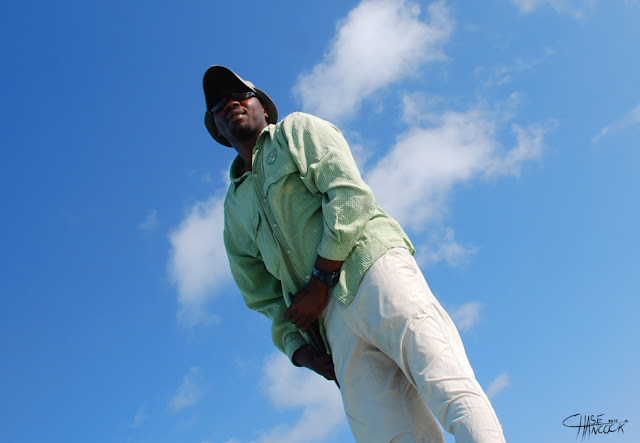 My first bone from the boat… 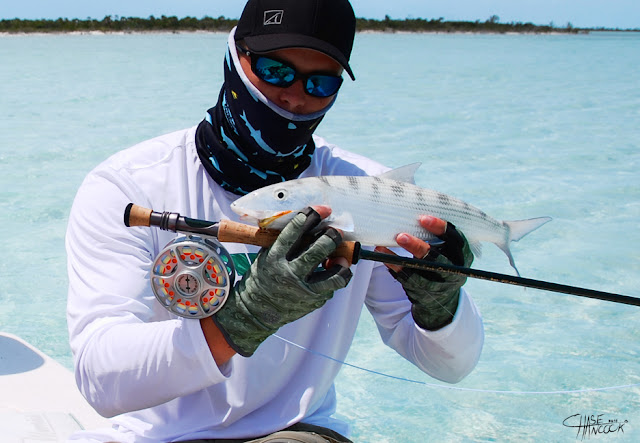 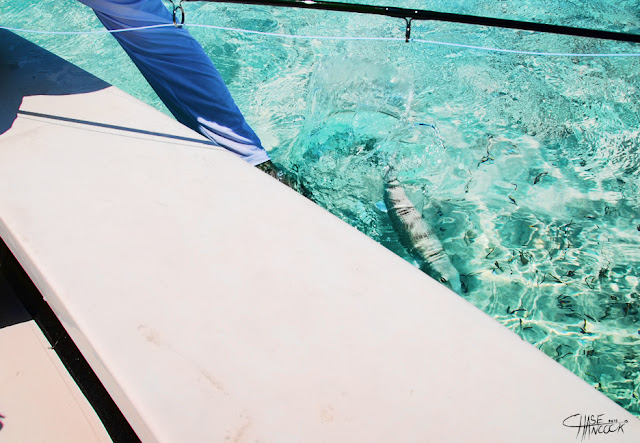 Kyles first bone off the boat. 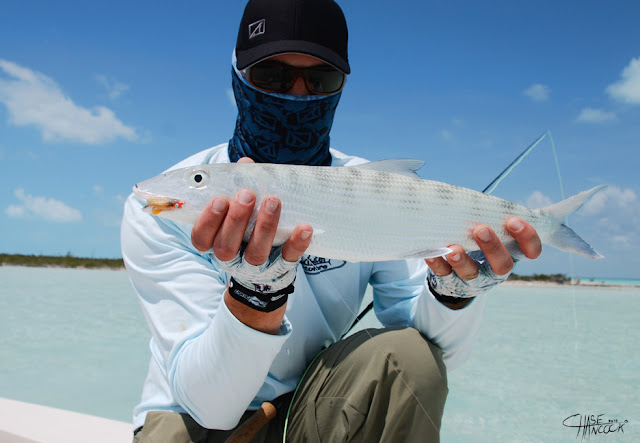 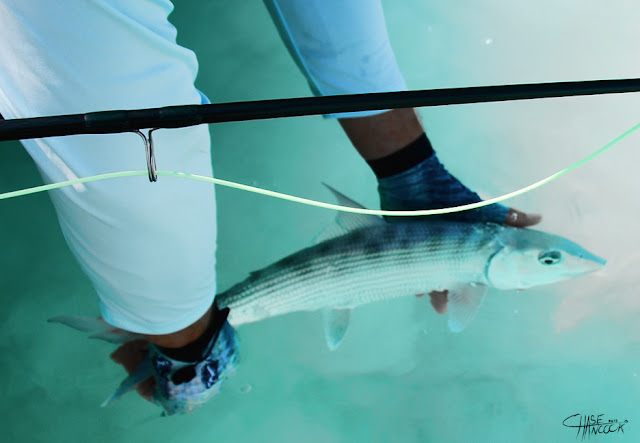 We only got one fish each by boat, I did pop a nice sized bone off but we still had plenty of day light and headed straight out to the flats after returning to the lodge. It didn’t take long before we found a school of tailing fish, and they were hungry. 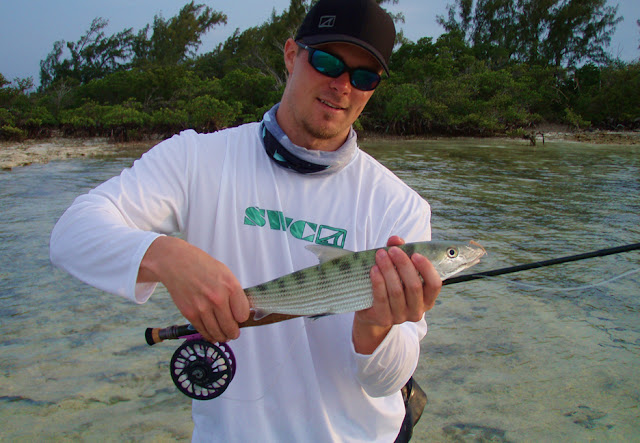 Got one more small bone before dinner…so far life is good.
Wednesday – Land ho…
Woke up to the same thing, ate and headed to the ramp. The guides had decided that with the winds we should take the time and make the run to the west side. Immediately my heart was racing, from all I have heard about the west side I was pumped! Unfortunately my and Eddie O’s dreams were soon shattered when our guide decided to jump a rock and bust his lower unit. I felt bad for him more than anything but me and Eddie were actually a little excited to get back to the lodge and have the flats to ourselves all day long.
We got back and headed straight out, we fished from 9:30 in the morn to 7 pm without returning to the lodge. We walked at least 10 miles and just explored to get a feel of the White Bite. Our day turned out pretty good as we had shots at quite a few fish, Eddie got a nice fish(which I don’t have the picture of, I took it with his Cam) and I ended up with three. 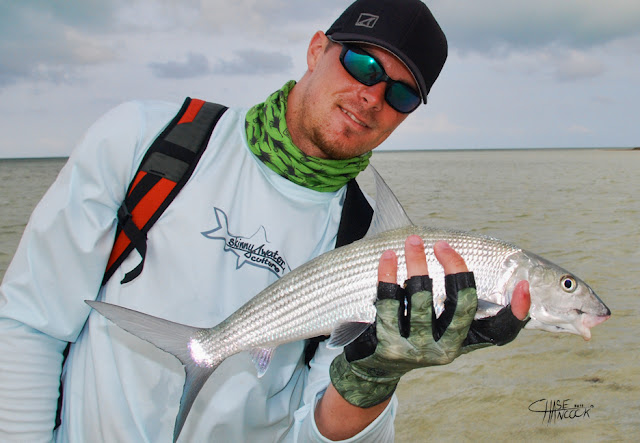 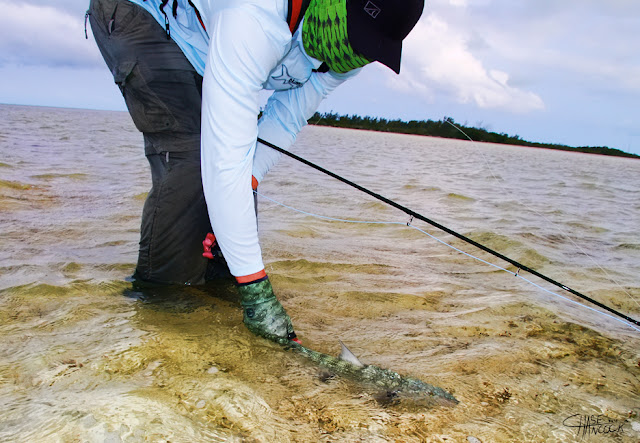 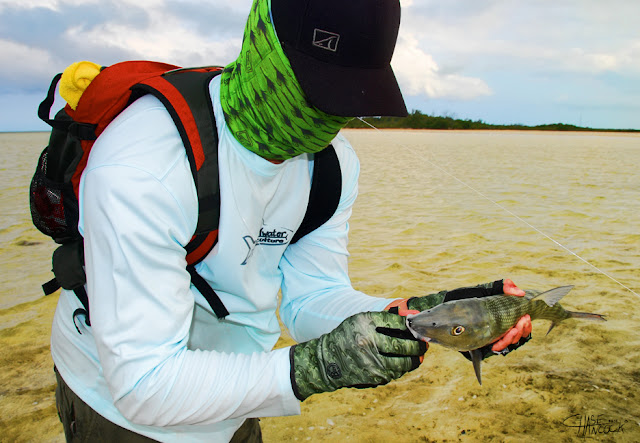 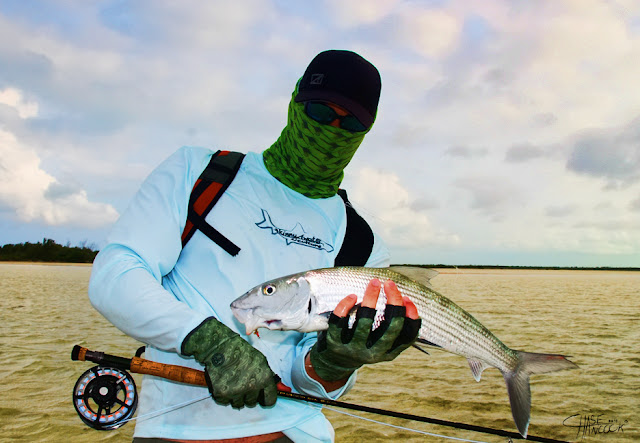 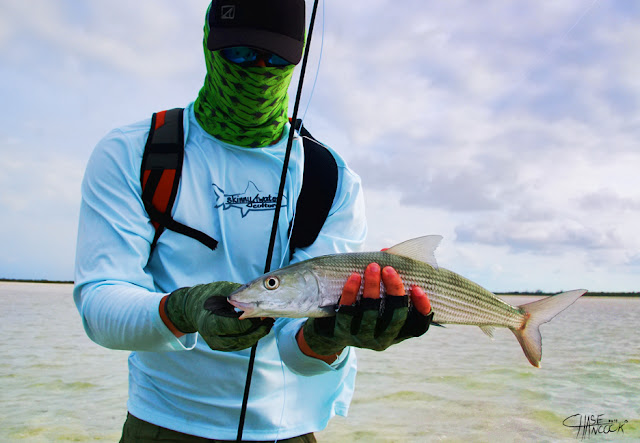 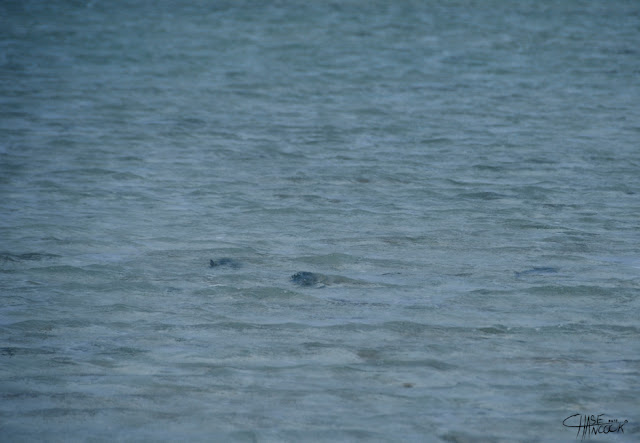 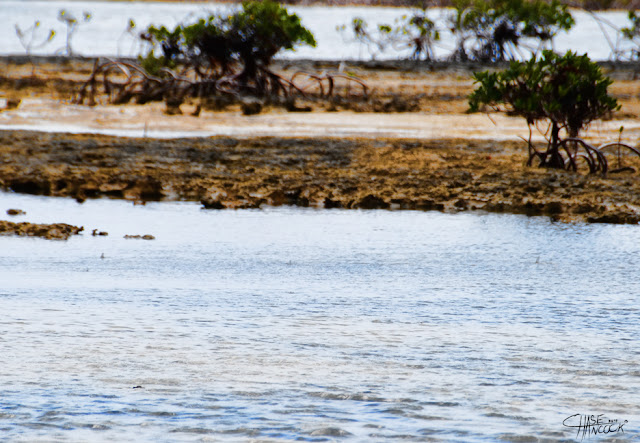 Thursday – West Side, here we come.
So today was the day we tried to head to the west side again. We did make it, and it was a unique experience to say the least. There was an eire feeling that if something happened you would be lost forever. We started on a flat that was about 4′ deep and quickly dropped off to 10′ and more. It looked like prime big bone territory. It wasn’t long before I had a missile cruising at me out of the deep, it was big..and coming fast, I made a nearly perfect 50′ cast that landed about 6′ in front of him and about 2′ to his right. He saw it immediately, charged it, tipped down…..and ate. My heart was pounding out of my chest! I just did everything perfectly, the fish co-operated and life was great!…for about 2 seconds… I think in my excitement I set up on a big fish a little to hard, the hook popped out….my heart sank…I was about to tear up. After slowing reeling my line up I reach out and grab a hook that has been opened up as if I had pulled on a chunk of steel.
We did see some more large fish and Eddie ended up with three and I got two more. The day was over and we headed home but the thought of that fish was likely to stick with me the rest of the trip. 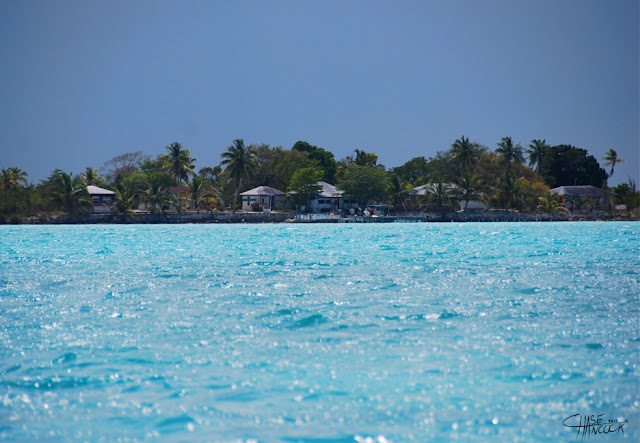 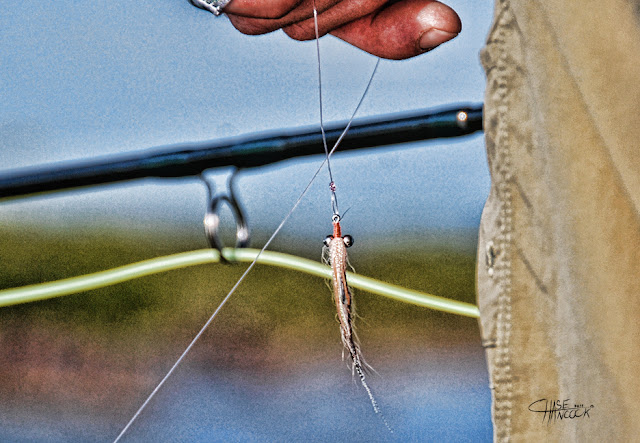 Friday – They’re swarming us.
This was another day on foot, we realized that the tides were not going to be good until after lunch so Eddie and Myself decided to take the kayaks out to the Tongue of the Ocean, about 2 miles straight out from the lodge the reef quickly gives way to thousands of feet of blue water. We were up for a good paddle. About half way out there was a big rock that we stopped and took a look out at the reef, saw a few fish and quickly got back on our way. We didnt see much out deep, even though we had several days of east winds there was not to much grass and the dolphin were just not around so we headed back in to go hunt some more bones.
When we got back Eddie was pooped so he took a little break and I headed out on my own. About 100 yards off the beach from the lodge I met up with Dan and Tim, two of the other guys that went with us. We got to talking and he was telling me about how he had just got a nice bone a few minutes ago and not far from we were standing. About that time I turn around and a school of fish are headed straight at us, I quickly strip off some line and make a 20 foot cast at fast approaching fish. Right when I think they are about to spoke two fish dart after the fly and I hook up. Not a bad way to start off the day wading haha! 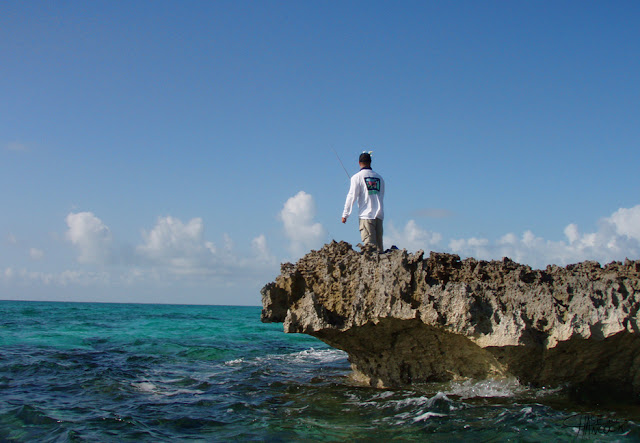 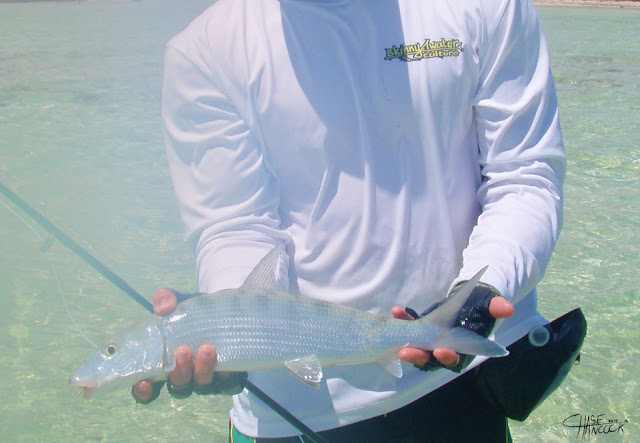 I walked a few more hours and Eddie meets me out on the bite, soon after we really get in the fish. School after school swimming at us from every direction. We were in water just over our ankles, fish back out of the water everywhere you turn. As soon as you made a cast at one school another would almost bump into you, spook off and scare some others. It was seriously funny. We never had more than about 5 seconds to make a cast and get a fish to eat before that school was spooked and another was on the way. I did manage to hook one fish but he came unbuttoned, I honestly could have cared less to catch one. It was an awesome experience to literally be swarmed by bones.
Saturday – Last day blues
Saturday came all to fast, we woke up early and we had until about 2:30 to fish before we had to catch our plane. Getting left behind crossed our mind all day, but in the good way. The good tide was not until about the time we needed to leave so we didn’t expect much but Andros is always willing to give up fish so it seemed. We found a hungry school right by the lodge, some of the nicer fish we had seen on the flats but of course I cast and the hungry runt of the group darts after the fly. Ohh well a bone is a bone to me, even the little guys take you to your backing and any fish that does that has my heart.
All in all I couldn’t have asked for a better trip, the people were amazing, the fishing was amazing. When I knew that I was getting the opportunity to go to Andros all I could think about is BIG bones, but looking back I am glad I didn’t get that 10 lb fish this time. All the more reason to go back, and believe me. I will be back! 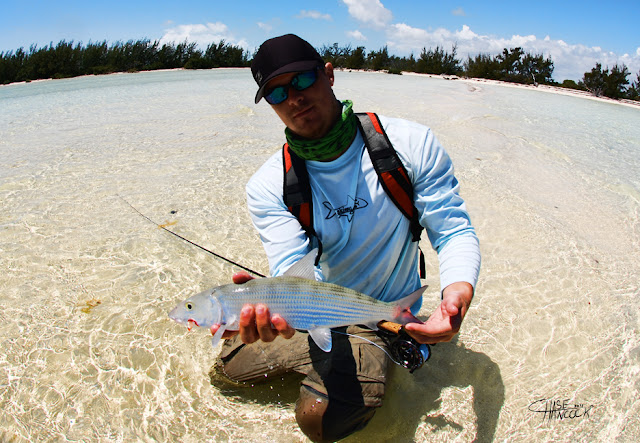 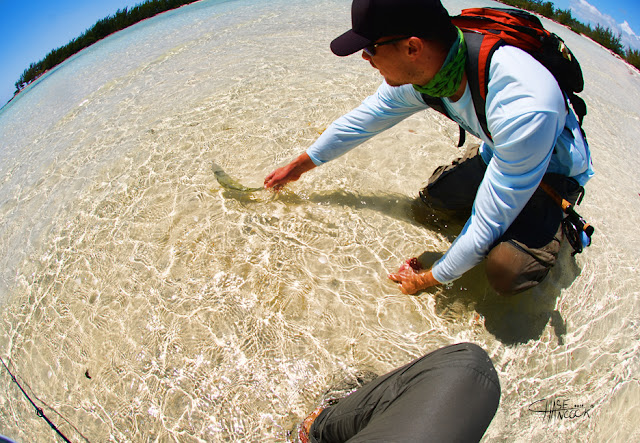