A lake in the middle of the sea

I write to you from my little apartment on a very little island (19”39’35.89 N, 80″04’58.37 W ) This is my first attempt at a blog but not my first time writing, although you might think so. I am from Brandon, Fl and learned I needed to be near the water pretty early on in life. Being a few hundred yards from the Alafia River and minutes from Apollo Beach, Simmons Park and the Little Manatee River, this was a great place to grow up. Lets say I have a “few” hours standing in the knee-deep tannin stained waters of Simmons Park. About 10 years ago, I was asked to come and run a guide service on Little Cayman Island. At this point i had been operating my own guide service and working with a larger guide team from Bayside Marina in Tampa. Doing mostly live bait type fishing trips, but also really getting in-to fly fishing for saltwater flats fish.

Little Cayman is a ten mile long, by one mile wide rock that barely breaks the surface of the ocean. With 5000 feet or more in ocean depth all the way around. There are some sand/grass flats though, with Bonefish. But the one thing that makes this island very special is “Tarpon Lake.” Picture a land-locked, but ocean fed lake. It seems the water flows through cracks in the rock that make up the island. On large tides  it replenishes the seawater in the lake and/or drains it on extreme lows. 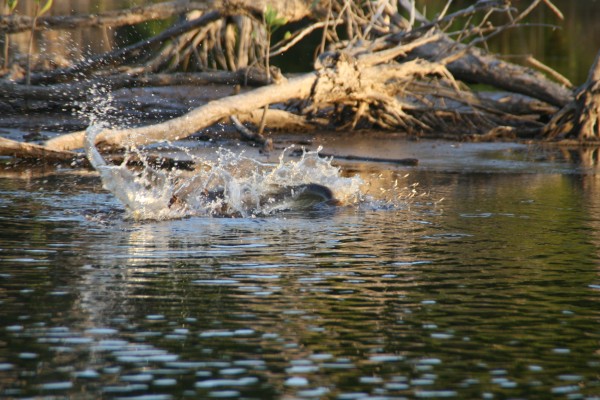 Feeding on some minnows!

It is one of the few “ponds” that never completely dries up. The lake is about a half-mile long and 350 yards wide. It is mostly shallow with very soft mud and a few grass patches that grow large in the winter. The Tarpon in the lake were placed in there sometime in the past, local legend is a long ago hurricane pushed them into the marsh/back country. Then, when the road was built that circled the entire island, it closed it off to the sea, or so it seemed. Tarpon can live in some pretty stagnant water, but with the occasional flow of fresh seawater, that lake is a great place for them. I don’t know exactly how they ended up in a smelly shallow red colored lake, but they are doing an excellent job adapting to it. 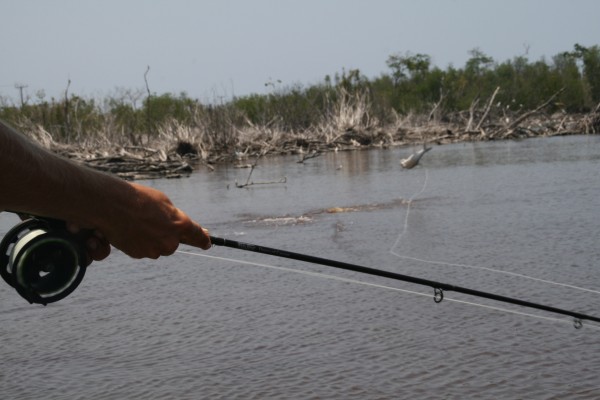 I have been fishing “the lake” for almost 10 years now. The last five have been by-far the best fishing. My clients and I have been landing around 150 fish, mostly on fly, a season. Eight weight is the prefered size outfit but 7’s and 9’s work also. I like a 20lb flouro tippet on a 9 foot leader. 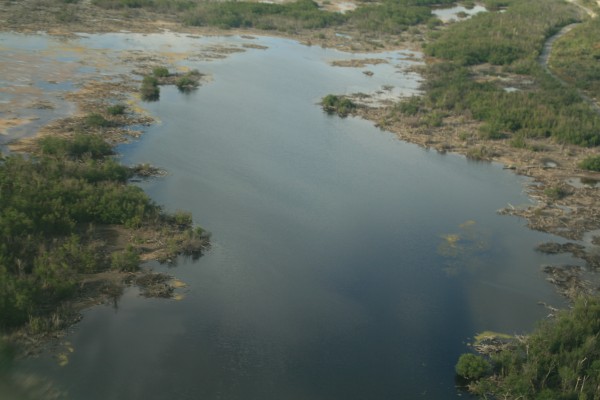 Sunrise is a magical time of day to be adrift in this surreal place. There seems to be an “alarm clock” somewhere that makes everything come alive. You can be sitting on the boat with just the sound of the waves crashing on the reef a few hundred yards behind you. Then you see Tarpon rolling around you and start to hear the “POP” of fish feeding on the “mosquito minnows” and crabs in the muddy water. The West Indian Whistling Ducks teach you how they received their name. When all of a sudden you realize that anywhere you cast, for as far as you can cast, is full of Tarpon! I always like to tell my fishermen that you want to be there BEFORE it happens, not while or after. If your already in position when the bite starts, it is nothing but a cast and a few strips before it’s time to “bow to the king.” 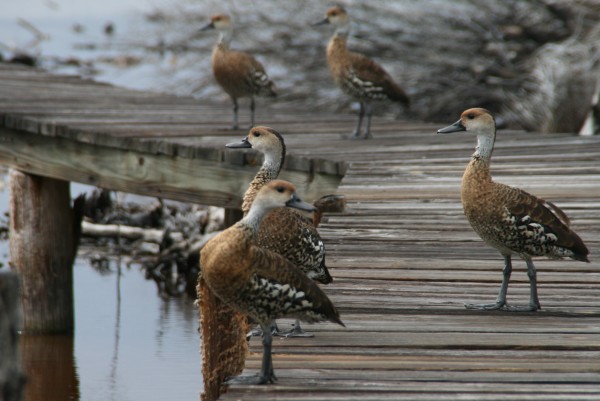 If that’s not enough to entice you to look at flights down to the islands, there has also been one Snook caught in Tarpon Lake and is probably the only one ever caught in Little Cayman, it was on spinning gear, and was released. It’s an amazing place. Sometimes the lake stays a little more docile than the day before, but there is never a morning you will regret getting out of bed. I hope that in your travels you get to see a sunrise on Tarpon Lake in Little Cayman, and maybe we can fish it together. 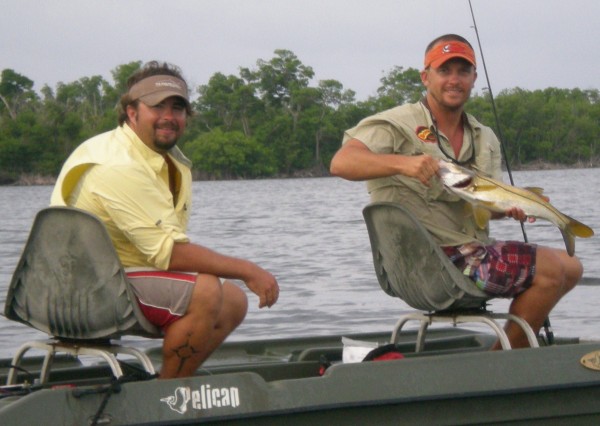